By now, all of us who consider ourselves true fans of American craft brewing know the story on the slippery India Pale Ale. Beer historians – those dreary types who think of the rest of us as Joe Sixpack just because we don’t care to know the minutiae of how the British actually shipped beer to India and what ship’s captain helmed which vessel to what port on which day of the month…etc., etc., endless etc. – continue to insist that it didn’t happen the way we all heard and I continue to fail to see how knowing the exact details in any way affects my enjoyment or lack thereof of the beer that’s in my glass at any given moment. The bottom line is that, sometime in the not-so-distant past, traders sailed out of some British port with kegs of ale that were packed with extra hops as a preservative on that long ocean voyage and the resulting beer that arrived in India was distinctive enough to create its own cult following. And the line just atop that one is that we Americans took that style and – in true, resourceful, pioneering American fashion – ran it right into the freakin’ ground.

I’ve screeched in this blog many times about the absurd “arms race” aspects of the IPA Scare and how the continuing escalation of Double/Imperial, Triple, Quad….Quint, Sextim? has so lost sight of any concept of what great beer is all about that it’s basically devolved into some frat-boy exercise akin to daring somebody to chug a bottle of Tabasco or eat a raw ghost pepper. And I retract exactly none of that.

But as we tapdance into 2015, signs of intelligent life are cropping up in breweries all over America. Now, after experimenting with just how many metric tons of hops we can cram into one boil kettle or bright tank and how much we can goose that with a bud-stuffed Randle, a LOT of brewers, maybe even most, are now looking back for some of what the style always promised to be but which got lost in the childishness: refreshing.

Hops are beautiful little flowers. They impart near-infinite flavor and bitterness variations and then take on even more character depending on how they’re used. Without hops, beer would basically be sweet, icky grain tea with as much flab as a sumo wrestler on a Twinkie binge. Hops balance out the innate sweetness of the grain sugars and malts that arise from their fermentation. They add nuance and suggestions and body and, most of all, acids, without which beer would be like chugging a bottle of maple syrup. And those acids do what acids do in wines and fruit juices – they make them crisp, refreshing, mouth-watering, and enable the beverage to complement fatty foods by the simple fact that acid cuts fat. Acids are why Chianti is one of the world’s greatest food wines and why chilled white wines are the perfect drink for a hot summer day’s picnic. And, in expressing hops acids in beers, IPAs have few equals.

But, past a certain level of bitterness, IPAs become too harsh for warm weather and too overwhelming for most foods. So it is that many, many brewers – now that the American craft beer community is getting some age and experience behind it – are now looking at how the IPA can evolve as a beverage, instead of a test of manhood. 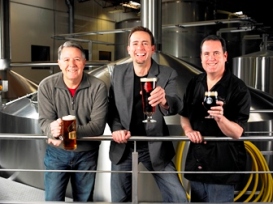 Back in the late summer of 2013, Stone Brewing co-founder, Greg Koch, began to think past the company’s well-earned reputation for those whopper IPAs that they have always somehow managed to make very drinkable as well as bitter enough to take the enamel off your teeth. He envisioned something a bit lighter, more supple, more overtly built to refresh and please the palate. It was a giant step to contemplate for a brewery whose very bottles frequently boasted that we’re not ready for a beer as bitter and uncompromising as what’s in the bottle. He had an instant and revelatory name in mind and challenged Stone brewmaster Mitch Steele and his assistant brewers to come up with something that would fit that very lofty name: “Delicious”.

As Norman Vincent Peale once said, “Shoot for the moon, because even if you miss you miss, you’ll land in the stars.” With this new IPA, Steele, Koch, co-founder Steve Wagner and their staff – to extend the analogy – shot for the moon and landed in another, wider, brighter, wildly more flavorful dimension altogether. Stone “Delicious” IPA is, hands down, the single best new-school IPA that I’ve tasted yet. It was not achieved without a lot of retakes and revisions. As Steele put it, “We went through several iterations of this beer at our brewery restaurant, Stone Brewing World Bistro & Gardens – Liberty Station, using several hops recipes until we had that “A-Ha!” moment, tasting a beer that I had asked Liberty Station Brewing Manager, Kris Ketcham, to brew. It was a single-hop beer called ‘Lost City of Liquid Gold’, using 100% El Dorado the new hop from Yakima, Washington. This beer gave us the last piece of the puzzle on the formulation of Stone Delicious IPA. We changed the dry-hop to 100% El Dorado and achieved the magnificent lemon candy and spicy hop flavors that are fun and unique.” The brand new hop variety, “Lemondrop”, from Yakima’s HopSteiner – a hybrid that I first wrote about after its first use in Deschutes 2013 edition of “Hop Henge” IPA and, at the time, was just called Hopsteiner Experimental Hop # 01210 – was also included in the earlier stages of the brew process, further emphasizing the lemon character and adding citrusy brightness. Minor additions of Calypso and Nugget hops were also used to flesh out what is an absolutely startling heft for a basic IPA.

El Dorados on The Vine

In my opinion, this immediately becomes one of the nation’s most significant new IPA beers and not solely for its almost shocking drinkability and flawless flavor profile. In conjunction with San Diego based White Labs, this beer uses an enzyme with the commercial name of “Clarity-Ferm”, which breaks down gluten chains, separates them and denatures the gluten, resulting in the first beer that uses barley as its primary grain and can still be enjoyed by those with gluten intolerance. The Clarity-Ferm addition during fermentation adds no color or flavor and reduces the gluten content below the safe levels determined by the FDA for gluten-tolerance consumption.

All of which would mean nothing if this beer were not the somewhat major miracle it is. “Delicious” undersells this beer’s character by a country mile. This is well beyond simply delicious beer, which would be enough, and well into a complete rethinking of the IPA style. There is a fabulous substance to this beer; a meaty, chewy, yet wickedly refreshing nature to it. The lemon drop flavors taste like just exactly that: lemon hard candy, minus the excess sugar. There remains a fine edge of herbal bitterness that perfectly balances any suggestion of overt sweetness and beautifully harmonizes with the candied lemon peel, tangerine, buttermint, and subtle caramel of some very assertive light-toast malts. It finishes dry and crisp and lingers in a spicy resonance on the palate, showing lovely spruce and pine resin suggestions as it fades. It’s complex enough for those of us who like to take our beers apart and look under the hood, and at 80 IBU and 7.7% ABV, is hoppy and strong enough to keep the HopHead kids happy and involved.

I don’t say this much because it’s hardly ever true but…this is very close to what I would call a “perfect beer“. God Help Me for that but it’s just inescapable. Delicious does everything a truly great beer is supposed to do: it is immaculately crafted, superbly balanced, hoppy as the Xpogo World Championship Series, and as user-friendly a beer as I’ve tasted in ten years, rivaled only by Deschutes “Red Chair” and “Twilight”, Wild Earth “Tamarack”, and Sierra Nevada Pale Ale for sheer quality and drinkability. I am hoping desperately that this major leap forward from one of America’s two or three best breweries signals a turn back to the timeless concept of beers with balance, approachability, and a recognition that Job One for any great beer is deliciousness. “Delicious” is Stone’s audacious answer to Greg Koch’s challenge; something of a risk for a brewery that’s made its bones by walking along and over The Edge but as undeniable as a gorgeous summer sunset. Scheduled to be released January 5th, in six packs of 12 oz. bottles, Delicious is limited so, If You See Something, BUY Something.   99 Points

3 thoughts on “Stone “Delicious” IPA: Shoot For The Moon and Land Among The Stars”