Let me just preface this with one clear and unequivocal statement:

Papa Bueno Silver Tequila is THE best white Tequila I have ever tasted. Period.

Hyperbole? Nah: Aytpically clear-headed recognition, from yours truly, for a brand and a family that worked their asses off to bring a truly world-class product home to – of all places – Seattle, Washington – not on anybody’s radar as a prime Tequila nexus.

Seattle attorney Scott Greenberg had a notion: make Tequila. In Seattle’s legal community, having a sideline as a minority owner of the Mariners or becoming a silent partner in a winery would be considered a little exotic. Traipsing off to Mexico periodically to learn All There Is To Know about roasting and fermenting agave piñas was borderline irrationality; more akin to showing up at Seafair wearing a body-stocking and tin-foil hat than any respectable sideline a member of our stuffy legal community would be encouraged to embrace. Nicely ironic, then, that a local barrister who told me, not even six months ago, that he thought Scott Greenberg had just taken a fistful of $100s and tossed ’em down a storm drain should be the latest person I saw ordering a cocktail in a Seattle bar and specifying Papa Bueno Silver. And that titanic goofball is not alone. 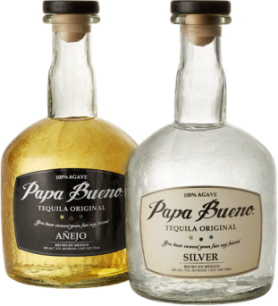 At a tasting held in one of those odd converted warehouses that Seattle’s Belltown neighborhood is infested with, the fabulous Domestic Partner and I tasted the Papa Bueno Silver, Añejo and Reposado (just arrived that afternoon from Jalisco) and were floored. FLOORED. Scott Greenberg looked vaguely familiar to me, as we shook hands, and we talked about that for a second, finally just chalking it up to passing images from, maybe, a Seahawks game or Seattle Symphony concert. Seattle’s still small enough that you can subconsciously catalog quite a lot of faces you may never put names to. Whatever it was, I liked the guy, right off the bat and was glad I hadn’t worn my t-shirt with my favorite Shakespeare quote emblazoned on it: “The first thing we do, let’s kill all the lawyers”, delivered by Dick the Butcher in Henry VI, and by me, when I played Dick in a production back in North Carolina. (It was only after a recent Star Trek binge that I realized he looks like a younger, less bewildered version of James Cromwell. Maybe send Cromwell a case of Papa Bueno? Just a thought….)

Not only would I not kill Scott Greenberg, I’d probably kill anyone who tried. Say whatever you like about lawyers, this one has a major-league palate for what Tequila should taste like. Along with his entire family, especially sons Scotty and Ian, Scott Greenberg has brought about a mid-scale miracle of ingenuity and good judgment by sheer, old fashioned persistence and actual, physical work.

He’ll will probably be disbarred, any day now.

But how would these Tequilas be for a fall-back position?

This is out of order, if you’re doing a tasting, but the Papa Bueno Reposado, the intermediate stage of “rested and aged”, shows most of the agave freshness and peppery intensity of the Blanco but with a fine-grained overlay of wet wood, citrus peel, creme de caramel, graham cracker, and subtle spices. Out of the 200 or so Tequilas of this type that I’ve tasted, this PB edition strikes the best balance between the native flavor of the agave and that woodsy mellowness, which is where a lot of producers drop the ball. Instead of seemingly cowering behind the wood tannins to hide imperfections in the flavor profile, as many producers routinely do, this stuff is whistle-clean before it gets barrel time and the base flavors are emphatic enough to marry with the wood without turning into an abused spouse. The careful filtration and enormous attention to detail of this process doesn’t at all compromise the soulful appeal of this instant favorite and, as something to just sit and sip – aside from an almost magical affinity for a fruit-based cocktail – Papa Bueno Reposado cannot be beat.   96 Points

Papa Bueno Añejo is still a work in progress but is, even in this early incarnation, one of the world’s truly exceptional examples of balanced roasting and masterful aging. As the roasting agave piñas caramelize, the sugars that begin as complex starches start a process of conversion to fructose that’s essential to the fermentation process. Over-roasting can kill the extended ripening of a Blanco that’s barreled and bound for the 1 to 3 year journey into Añejo. Under-roasting can stunt the fermentation and produce off-flavors. The skill of the veteran tequileros in the legendary Jalisco town of Antotonilco El Alto is evident in each drop of this glorious amber nectar. “Smooth” doesn’t even begin to describe it but then most Añejos are at least that. What separates the great ones is retaining acidity that keeps it fresh and vibrant on the tongue and a mellowed transition from the peppery exuberance of youth to the luminous richness of this form. Papa Bueno Añejo leads with a definite roasty agave note, overlaid prettily by warm wood, butterscotch, cantaloupe, dulce de leche, and preserved lemons. It shows a crisp acidity that makes it unexpectedly lively as a sipper but really shines as a base for a cocktail that involves any type of spices or fruit puree or liqueurs. This is a stunningly thoughtful, complete, polished Añejo that tastes very much like it came from a 150 year old Tequila house and not from a company still well short of a year from their first release.  98 Points

Scott, at the birthplace of Papa Bueno

But, for my money, the Instant Classic of the line is Papa Bueno Silver, the most dizzylingly fervent and yet polished Blanco I’ve found in over five years, now, of searching. I had ONE sip of this and was left almost speechless, mentally scrambling to find any other Silver that bore even a faint similarity for comparison’s sake. The closest I could find was Partida Tequila Blanco, which offers only maybe 75% of the edgy agave pepperiness and intensity of this. The flavors explode on the tongue: fresh-squeezed agave, with its cucumber-ish vegetal character (which would kill a wine stone-dead but which works beautifully in this flavor set) and black-pepper spark playing sweetly off a hint of wood and a fistful of pink grapefruit, lime leaf, and lemon shadings. Back in the profile lurks a bit of something like spruce tips and a hint of herb tea with chamomile. Even a lengthy stint in the freezer, something I very rarely do, couldn’t mute the electric appeal of this stuff. As a word of warning, it can take over a cocktail, if your hand gets too heavy but if you strategize your recipe around its core flavors, the changes to something like a simple Margarita, the wildly overlooked Paloma, a Bloody Maria, and even the much-abused Tequila Sunrise can be eye-opening. The Sunrise, especially, just becomes a whole new, non-obnoxious drink when laced liberally with this stuff.

Papa Bueno Silver is simply one of the world’s top three or four Blancos; easily in a class with the Partida, Fortaleza, El Don de la Familia  Plata, PaQui, Casa Noble, and the other top dawgs in the silver stratum.  99 Points

Seattle as Tequila Town USA? Papa Bueno constitutes as good a claim as anyplace else is sporting, these days. If you love Tequila at all, this is a new brand you have to try – and soon.