I’ve read dozens of times, lately, that brewers and brewery owners all over the country are worried that, with the planetary-scale boom in the craft beer segment, they’re in danger of running out of names for breweries and beers.

What American craft brewing is running out of is Imagination, not words, terms, verbiage. To be fair, brewing is hardly the only business class that has no clue how one gets outside their metaphorical box. It happens in every form of commerce. How many products carry names like “Grand” and “Special” and “Choice” and “Reserve“? Answer: too freakin’ many to count. Imagination and thinking past old paradigms is, for a LOT of people, even harder than making a great beer, chocolate bar, widget, or movie. We recently watched Michael Douglas and Diane Keaton in something called “And So It Goes“, a nice (if a tad slow) two hours of entertainment, saddled with a name so cliched and unmemorable that I’ve now talked with better than a dozen people who said. “Oh, yeah, that thing…What was it called again? ‘As Good As It Gets’? No….” This was obviously a couple of producers who tried a blue million titles and finally just said to hell with it and chained that boat-anchor to the movie’s leg. 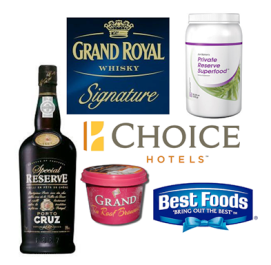 I was, for a significant portion of the 70s and 80s and into the early 90s, a copywriter for ad agencies in North Carolina and South Carolina. Branding was one of my many jobs and maybe the most satisfying. Tag lines, brand names, identity campaigns – LOVED it. Asked to create a boys’ companion line for the female children’s clothing brand, Rosebud Duds, I came up with Boys ‘N’ Berries. For Wrangler Jeans: “Kidswear That Kids Swear By“. For Hanes Hosiery: “When Snowflakes Fall, Winteralls!”

A couple of years back, when contemplating what I might want to do in “retirement” (never gonna happen), I realized that owning a brewery was probably the thing, after writing, that interested me most. So, toward that end, I conceived and heavily copyrighted three possible names:

“Abeeration BeerCo“©: Specializing in oddball, experimental beers. Tagline: “What Kind of Beer is That? It’s an Abeeration!”

“-Ism Artisan Ales“©:  The main label, dedicated to rethinking of wild/brett/sour ales, Belgians, and fruit-infused beers. The names would be words that use “ism” as a suffix:

Google  “words ending in -ism“. The variations run on for pages. I’ll never run out of terms, many of which describe styles of ales beautifully.

The point of this is not to show how clever I am. I know I’m a good writer, however that sounds, and have had endless reinforcement of that, over my career. But doing it is a matter of WORK, not just native talent. You absolutely CAN learn to be good with words, expand your vocabulary, and get outside your tradition-bound thinking. The style of beer does not have to be a part of its name. It can be a sub-head and there will, here in the internet age, be no shortage of ways for customers to find it. I momentarily forgot the name of the Wingman Brewers Pilsner that I liked so much, earlier this morning, so I googled “wingman+pilsner” and instantly got “Old Plank”. Nothing to it. Don’t be afraid to attach a name which YOU feel describes the beverage. If it’s good enough, forgetful yoyos like me will find it. 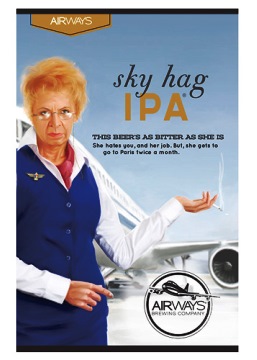 It’s your beer. You made it. If there’s a memory or association that resonates for you, use it. Airways Brewing, in Kent, Washington, is owned by Alex Ditmar, a guy who used to work in the airline industry. Alex will never run out of beer names. Pre-Flight Pilsner, “Sky Hag” (Tag line: photo of a crabby flight attendant: “You think she’s bitter?), “Seat Kicker” and “Loud Lady” IPAs, “PSA” (after TSA) Summer Ale, “Beverage Cart”, “Pat Down”, “Final Departure”, “Starliner”…no shortages anywhere on Alex Ditmar’s horizon. And, too, not everything needs to wear a baggage tag. He also has beers just called Lemon Drop, Northwest Amber, and Raspberry Cream Ale. If no name rings your bells, don’t sweat it. The next one will.

And don’t be afraid, too, to just invent a word, if what’s conventional just doesn’t work for you. “Kleenex”. “Coca-Cola”, “Microsoft”, “Accenture”, “Kodak”, “Xfinity”…all these brands were accepted and remembered in the marketplace, even though they were, for the most part, crafted out of thin air. The trick is simple: short, easy to read and pronounce, fun, and memorable. Shameful admission time: When Paul Evers sent me that first email, announcing that his and Larry Sidor’s new brewery would be called “The Crux Fermentation Project“, I hated it. HATED it. I thought Crux was an ugly little word that conjured up similar ugly little words and told him so. How wonderful that he didn’t listen to me. Today, I think Crux is a genius name: simple, pithy, fraught with meaning for their Mission, and sounds like NOBODY else’s. 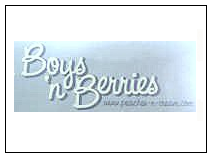 As an old copywriter, I miss doing stuff like this, so here’s my offer: If you’re stuck – I mean really stuck – and just cannot come up with it, send me an email. Tell me a bit about your beer or brewery and how you see its products or what’s in the current tank. I’ll send back some names. Use them or don’t, as you like. Nobody bats a thousand in the copyright biz. But if you do decide to use it, here’s what it’ll cost ya: Five pints of the beer, if I ever walk into your brewery, or a case of bottles, if you package it, shipped to me. No cash, promotional product write-off. Done.

BTW, this offer is also open to anyone with a winery or distillery or maybe even your cupcake shop. I like producing identity materials quite a bit and it’s a short, fun process. If you’re reading this and you’re stuck at anything, send that email.

It seriously kinda breaks my heart, as silly as that sounds, to read that brewers and owners feel stuck for names when craft brewing, for all the sustained boomage that is thundering out of the culture, really has only scratched the surface of the English language and what names can be created. If you believe nothing you read here, ever again, believe this…

We are NOT running out of names and if you believe you are, what’s running out is your inspiration and imagination…and that is something which absolutely can be fixed.

One thought on “Breweries Running Out of Names? DON’T Believe It!”