(NOTE) I humbly apologize for the screwy spacing in this post. It’s just more WP whackiness.

Today, I read a Facebook post from a guy I barely know but respect greatly, who runs a beer distribution company Back East. I’m going to paste up his remarks to me here, to frame what I’m about to say. The discussion started in regard to a post by Dr. David Ryder, Miller brewmaster, writing in that sublimely impartial journal, millercoorsblog.com, about what it takes to be a great brewer. As always, no names will be used…except mine:

Fool:   Ryder brews beer in industrial quantities. He also brews lagers, almost exclusively. He is also, more significantly, a SLAVE to the Bottom Line, especially now that his company is firmly under the thumb of AB. I can respect his views on brewing and I know he means well. But I don’t think Ryder and his ilk are where aspiring craft brewers should go seeking inspiration. Try Sam Calagione or Wayne Wambles or Larry Sidor.

FB Friend:   Any new brewer should not write off learning from any experienced brewer. There are so many below average breweries starting up that its scary. Bigger batch homebrew, that I’d strain to score in the low 30’s. On the high end. Whatever system you use, your goal should be the precision of their technology, and the eye on their bottom line. Keep the independent spirit and envelope-pushing styles of those amazing brewers if that’s your taste and business model. What happened to just making damn good beer? 60 minute, Jai Alai. Believe me, I love Deschutes and Crux has been blowing me away, but Dr. Ryder knows more than the average new brewer and they would be well advised to learn from ANYONE with more experience.

While I agree with my friend’s assertion that “…the average new brewer…would be well advised to learn from anyone with more experience“, I just could not deal with one more weary, knee-jerk reiteration of this fanciful business of calling, in effect, ALL new craft breweries into question. The current presumption seems to be that there is a widespread epidemic of new breweries which brew beer that’s absolutely undrinkable…and that is just not so. Daily, all over this country, new craft breweries open and make the usual rookie mistakes: their ambitions outrun their skills, their bank account leaves them short of equipment and materials, they really do NOT understand the science/art frisson that’s at the heart of brewing beer, they have a hard time learning their equipment and batch scaling, they’re overwhelmed by early success and try to rush beers out before they’re ready…or they’re just run by jugheads whose sole interest in craft brewing is looking cool and using up some disposable income. Of those groups, it’s really only the last one that doesn’t promise to get better. I know of two like this, within a short drive of my house, and one was recently, mercifully sold to another brewer whose skills and passion CAN make it significant and profitable, and the other chugs along, doing nothing special and promising nothing more than that in the long run.

But that’s TWO, in a region that contains over 700 breweries – and counting! – and those are the only two I’ve found that started and never improved. I totally wrote off Wingman Brewers, a Tacoma, Washington, outfit that’s less than two miles from my new home, when I first tasted there in 2012, but then did what I always do: tasted there again, after two years. The difference was PROFOUND. (I have a list of, currently, twenty-two breweries at which I was somewhat impressed but need to taste again, after their start-up jitters are over.)  Wingman, circa 2015, is a superb and dynamic brewery, turning out beers of real style, creativity, and accomplishment. What happened?

They learned their craft.

We have this peculiarly American thing, these days, of expecting every new business, every NFL football rookie, every newly-named CEO, to be great right now, from Day One, operating at full speed. We demand to be immediately dazzled or we lose interest, write them off…and thereby undoubtedly destroy thousands of potentially amazing, profound, uplifting careers of the sort that add immeasurably to the rich tapestry of America. We relegate NFL players to the scrap heap if they’re not great from their very first game. I heard a famous sportscaster dismiss Kirk Cousins, last year, saying, “Washington is in real trouble because they don’t have a quarterback. What they’re stuck with is Kirk Cousins, who is just okay but he’s a career back-up and there’s a reason for that: he’s just not all that good.”  I wonder what that guy is thinking now, with all that sticky egg plastered to his face. Kirk Cousins is Wingman is Mark Harmon is Reba Macintyre is…Those who took a little time to get up to speed. WHY do we expect breweries to be any different? 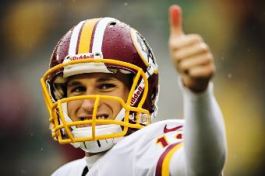 I firmly believe that people who sell this tired, hot mess about the declining quality of craft beer are saying it to appear plugged in and sophisticated. They’re the same people who sniffily dismiss the term “craft beer” because they say it’s meaningless, never mind the fact that most Americans hear it and think Dogfish or Deschutes or Stone or Sierra Nevada and know damned well what it represents. These folks desperately want to be cool and above the Average Joe crowd of beer lovers and these little pearls are their way to get there. Please note that I am ABSOLUTELY NOT including my FB friend in that description, as I know him to be a consummate professional and completely earnest…but I think he’s imposing an unrealistic standard upon a whole stratum of American brewers by judging them all by the yardstick of that ultimate tier. These were the exact two examples he used:

Two world-class beers from Dogfish Brewing and Cigar City Brewing, respectively – two of the nation’s ultimate top tier breweries…The comparison is inherently unfair and irrelevant. You can’t get to that tier without a LOT of history….which all these “below-average” new breweries simply have not had a chance to achieve...yet.

Here is my response to my friend. I don’t begrudge him his views at all…but I cannot take such a short view of something which people build to last a lifetime…

Fool:   “I keep hearing all this stuff about all these below-average breweries opening and it just baffles me. Where? Where are these sub-standard breweries? They are not here, in my corner of the US. I visited over 200 breweries in 2015 and I found TWO that had absolutely nothing going on. TWO. And that 200 doesn’t count all the breweries that I know are good, which includes Washington, Oregon, Idaho, California, Colorado, Montana, Utah, and Arizona. In my travels back east, I found THREE breweries out of fifty+ that were just bad. The common factor in all those sub-par breweries? They were NEW. This is not the freakin’ NFL. We don’t get to write off new breweries just because they’re not great, right out of the chute. Some operations, like Reuben’s Brews and Holy Mountain in Seattle, come out running because they’re owned by homebrewers who became professional brewers and then opened their own facilities. They had a head start. Not everybody does. I don’t understand this peculiarly American thing of trying something new and, if it doesn’t make us see stars immediately, saying “Oh, this is a ‘below-average’ brewery.” Yeah, maybe NOW…but what about in three months, six months, a year – after they’ve learned their systems and worked the bugs out? I totally wrote off Wingman Brewers, here in Tacoma, three years ago, after my first tasting there. Well, they got GOOD – seriously good. I did what I always do: gave them a second chance.

Were you great at your job from Day One? Why expect a brewery to be? And even when I think a brewery just doesn’t have it, in MOST cases, they find an audience that absolutely does NOT agree with me. There’s a brewery in Seattle that’s run by an overly precocious, pretentious kid whose ideas run waaaay ahead of his skill. I’ve never written a word about the place because I can’t find anything positive to say. But that misguided kid recently had to triple his space and ramp up production significantly because Seattle does not see this my way.

Most importantly, I don’t know how this might be where you live but I know for a FACT how it is out West: a rising tide floats all boats. From the git-go of craft brewing, these small brewers threw out the old, super-competitive business model. Co-operation has been one of the hallmark virtues of craft brewing out here and it remains that way today. New brewers get advice and actual, physical help from established breweries and it allows them to improve radically, quickly. This business of writing off new breweries because they’re not up to the standards of Deschutes and Dogfish and Stone, et al, is just crazy. You do NOT get to that level without YEARS of work and persistence and LEARNING. Instant gratification is fine; I’m a big fan of it, myself. But it’s unrealistic to think that it’s possible in every human endeavor and especially in brewing, where science is such a HUGE part. Ryder’s little spiel is fine but craft brewers stand to learn a LOT more from other craft brewers than from a man who brews in 10,000 barrel batches…and their peers are not at all hesitant to give them that leg up.”

3 thoughts on “All These New “Below-Average Breweries”: Where Are They?”