“Suave“: (Spanish) smooth or soft or any combination of the two; pronounced “SWAH-VAY”, it is distinguished from the English pronunciation “SWAH-vh”, meaning “sophisticated” or “elegant” or “unctuous”.

“Pinot Suave“…hard for me to express what a struggle I had with this name of an absolutely game-changing new…well, what do we call it? Innovation? Not really. Ale brewed with a wine base or with grape must has been done before, most notably in Blue Moon’s “Golden Knot”, in which a fairly nice Chardonnay was used in place of water in the brewing process, or “Noble Rot”, the celebrated collaboration between DogFish and Alexandria Nicole Cellars, in which the marc of a late-harvest Viognier was used to infuse a base ale that, to be honest about it, more or less disappeared, because Viognier, even in its normale state – much less a dessert wine – is fiercely assertive. I loved Noble Rot and said so in this 2012 post from seattlepi.com. But it was not, I felt, a total success as much as a really delicious milepost.

I guess we could call this is new take on Belgian or Belgian-style ale…except that, for generations, people have been describing one of the world’s great beers, Browerij Verhaeghe Duchesse De Bourgogne, as “a Belgian sour with Pinot Noir dumped into it“. Duchesse has a huge legion of fans (of which I am certainly one) but also its share of detractors, many of whom cite that very description as the reason they hate this lovely ale. For those folks, Duchesse is bad because it tastes like wine as much as beer…and therein lies the Problem.

The fact is that those Duchesse Haters are right: it does taste a bit more like Pinot than ale. The ale is not lost altogether but those haters, those generally Euro-purists, think an ale should be an ale first and a wine, well, maybe not even second; maybe more like fourth or fifth. I see their point. And that point was very much at work on Noble Rot and Chardonnay Blonde. Both of those ales pushed their constituent wine to the fore, where I believed that it should probably – and properly – be a background note…or maybe just in balance. A nice judicious balance of wine and ale would have been nice. But up until yesterday evening, I hadn’t found one of these hybrid dealies that brought the ale to center stage or struck much of a balance at all. And for that reason, I had very serious doubts as to whether a true fusion of wine and beer was even a good idea.

One of the reasons that I believe Pinot Suave is the first real, successful melding of wine and beer is that, as opposed to the French Bodybuilder that is Viognier, Pinot Noir is a The Schoolyard Wimp. (I use that term only for comparison, so insert “subtle” or “nuanced”, if wimp bothers you and save yourself – and me – the waste of time involved in emailing me to express outrage.) The fact is that Viognier is quite assertive, while Pinot is often complex, frequently bright and nicely structured, but never anywhere near as rich or deep or intense as Cabernet or Syrah or Malbec or even Merlot or Cab Franc…or Viognier. The proposition is set out right on the label of Pinot Suave: “Belgian-style Ale with Pinot Noir Grapes. Aged in French Oak Barrels” and on the side note: “Belgian-style ale aged in French Pinot Noir barrels with Pinot grape must…” And it’s in that “grape must” that, I believe, this ale works where so many have missed the target. 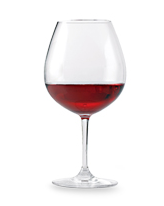 The lightness of Pinot Noir

Pinot grapes being less intense and assertive, to begin with, macerating the ale on the “must” (the spent skins, seeds, stems, the odd leaf, and some of the yeast used for fermentation) draws from parts of the winemaking process which are inherently less forward than the finished wine itself. Many, many Old World wineries would take the spent musts of wines they produced and make a second wine, commonly called “piquette” or, in ancient times “lora“, by adding water and refermenting. It retained a few characteristics of the original wine but was much lighter and lower in alcohol. This was what the winery and vineyard workers were given to drink for lunch, so that the spectacle of dozens of guys sleeping under grapevines all afternoon was less of a concern. It stand to reason that much of what made the wine what it was had been taken from the musts and I think that – along with a helluva lot of brewing skill and Deschutes’ epic, near-legendary  judgment – is why Pinot Suave is, to me, the first really ground-breaking bottle of that shotgun marriage of two very different beverages.

Pinot Suave is, in fact, “suave”. Pinot Noir is not “suave” and is frequently almost unfriendly in its grasping tannins and fierce, tart, acidity. In Pinot Suave, a perfectly lovely Belgian-style Strong Golden ale, simply made with US Tettnang and Crystal hops, serves as the base and provides some very chewy caramel, fruitcake, and burnt sugar notes, which harmonize surprisingly well with an unmistakable patina of Pinot fruitiness – stewed raspberries, dried cranberry, red plums, and rhubarb – and the plum jam, pencil, and vanilla notes of wet Pinot barrels. Subtle tropical fruit and spice notes from the Belgian yeast lurks just in the background. As the first sip just entered my mouth, I was set to be disappointed. All I got was the hallmark Pinot fruit. But, as the liquid crossed my palate, the ale’s brawny character washed over the fruit notes and took a firm, malty grip of the profile. A near-perfect background tartness, (from a  pretty, juicy sour wort) very reminiscent of Duchesse and especially the Liefman’s Cuvee-Brut I drank last Thursday and Friday, laid over the other flavors in a seamless harmony and, by the time I swallowed the first sip, I knew I was Onto Something. 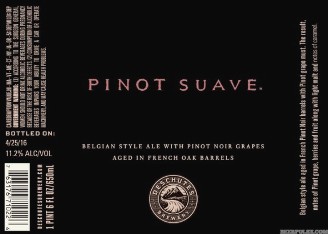 I can’t claim to know how or when or to what degree the American drinking public – with its tiresome fixation on the IPA and British-tradition ales in general – is going to embrace the concept of a beer/wine mutation like this, but for the adventurous among us – those who, like me, avidly seek out what is different and experimental, ready to try it and see, without expectations, and accept it as its own animal when it goes radically outside the lines – Pinot Suave is going to be a major Revelation; a true, tangible, drinkable, delicious affirmation that a blending of these two wildly disparate types of liquids can not only coexist in one glass but produce something beautiful, eye-opening, forward-thinking, and satisfying. This “beer” is dependent on neither wine nor ale in a dominant role but the right combination of the two…a blending that adds up to more than the sum of its parts. 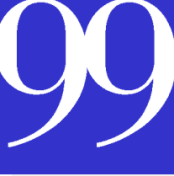 I usually, these days, assign a numerical rating at the end of write-ups like this. And that works mostly because, with the thousands of beers, wines, and spirits I sample ( not “drink”, “sample“, as in “sip, taste, and spit”) every year, I have a ready frame of reference for almost any style. This is probably the smallest stylistic base I have, excepting maybe only Kvass or Sahti or one of the African ales fermented with saliva, and working on that basis, Pinot Suave would have to get 100 Points. I’m backing off that only because I firmly believe that we haven’t heard the last of this idea and somebody – quite possibly even Deschutes, themselves, with the 2017 Pinot Suave? – is going to push this on to the next milepost. In a nutshell, though, if you can forget all this quasi-learned claptrap about stylistic continuity and brewing techniques – like maybe if you just, ideally, were poured a glass of this and nobody told you what it is! – this is a gorgeous, smooth, nicely-tart, refreshing, sumptuous ale that will deliver a ton of pleasure either right now or – if you’re smart – after six, twelve, eighteen months of careful aging. Pinot Suave is everything the name suggests…and a whole lot More.  99 Points