Let me get right to this, in open defiance of nine years of tradition in The Pour Fool…

Cruzan Rum is not what it once was.

That can either be good or bad. The first time I drank Cruzan was in 1981, when a friend, returning from the Virgin Islands, brought me back a bottle of a gorgeous, off-dry dark Rum from what was, at that time, a family-owned estate with a long and proud history. I nursed that bottle for months, allowing myself an ounce or so when had a really good week. It was stunning and was the perfect antidote to those hundreds of bottles of cheap Bacardi I had thrust upon me at parties and restaurants for twenty+ years, when there was little other Rum available. I quit drinking Rum for a long time, because of that accursed sameness and mediocrity. Then the Cruzan came along and, as the Liberty Mutual commercial says, I broke into my Happy Dance. 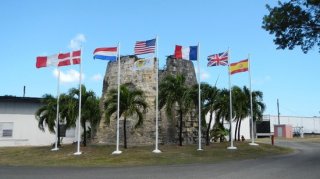 But, in 2008, the Nelthropp family, owners of Cruzan for generations, sold out to Beam Suntory, a huge international liquor conglomerate. I expected changes and they came. The standard at Cruzan – a Virgin Island, or “V.I.” rum, as opposed to the more sought-after versions from Jamaica and Barbados – was almost freakishly high and I figured that, if Beam Suntory upheld it even by half, these would still be Rums that were very much worth drinking and might even be a better value. At my last tasting, in early 2009, soon after the take-over, their Dark was frankly lack-luster and I chalked it up to corporate cost-cutting and Moved On.

I was recently – actually, not so recently, because I liked the Rums but didn’t quite know what to say about them, so this is now about six months on – sent samples of Cruzan’s Distiller series and…I was stunned at how little had changed…and how much. Beam Suntory, far from allowing the standard of the Nelthropps to lapse, has rallied from that 2009 mess, evidently retooled a bit, and put Cruzan into a dead-locked tie with the older stuff, at least for this distiller’s series. I received the Estate Diamond Dark and Light and the Single Barrel and all three were splendid…there’s no other word. Maybe certain Rum enthusiasts will sneer at this assessment and they’re entitled but, purely from the same perspective that this entire blog is about – what’s going on in your mouth, at the moment you sip, all history and comparative judgments aside – these are SPLENDID bottles of what Rum is and should be.

The Cruzan Estate Diamond Light was elegant and seamless and easy to drink and showed forward flavors of its time spent in oak, with a big, happy vanilla character, laced with notes of Caribbean spices (NOT added), candied orange peel, lime leaf, buttermint, and a whiff of flowers. I’m not a cocktail drinker but I did try it in a couple of those fancy drinks that I frankly don’t get or like and found that, far from disappearing and just adding octane, as many mixers do, the Cruzan amplified and complemented the flavors of the mixers and stayed present and assertive. This is a light Rum with some hair on its chest and it’s a gorgeous sipper, just over ice, with a twist, all on its lonesome.  94 Points

The Cruzan Estate Diamond Dark Rum  is a sensuous, almost decadent bottle of tropical mystery and intrigue. There are, swirling about the big wood/vanilla/caramel core of this stuff, grace notes of treacle, burnt sugar, figs, almonds, subtle spices, a dash of coffee, and cinnamon prominent on the lazy finish. I’ve tasted several Dark Rums,lately, that lived up to the term “Dark” only because of the color of the liquid. On the tongue, they may as well have been whites. This Cruzan delivers a lovely intensity of flavors and a silken mouthfeel that makes the slight burn quite tolerable, even a tad enjoyable. This will seem crazy or hopelessly poetic but this is one of only two rums I’ve sampled in the past three years that gave me the feeling that I was drinking a beverage that originated in the Caribbean. That “tropical” aspect I mentioned above is, for me, the hallmark of all fine Rums and this Cruzan Dark tastes of it with every sip. Along with the stunning South Bay Rum, this Cruzan shouts out its V.I. origins in a very pure, clean way. The only negative I can say of this stuff is that it will take over your cocktail, if you’re a half-ounce heavy-handed with the recipe.  Other than that, Cruzan Estate Diamond Dark Rum is the Real Deal.  96 Points

The Cruzan Single Barrel Rum is a blend of lots that are as old as twelve years, and then receives additional barrel time after blending. I am more conflicted about this that either of the other two because it’s obviously a stunning, luxurious, silken mouthful of complexity, with flavors of cloves, brown butter, dulce de leche, coconut flan, and cafe au lait developing across the palate. It’s viscous and dense and clearly shows its leisurely history but, two things: One, it’s called “Single Barrel” but it’s blended from various lots…which means a whole bunch of barrels. If the Single Barrel name is intended to refer to its final aging after blending, that should probably be made clear. And then, two: This misses by just the smallest of margins being indistinguishable from spice-infused Bourbon. It could, in a blind tasting, fool a LOT of people. I don’t think that incidental similarity to whiskey is necessarily a negative, though. If it falls a tad outside the usual expectations for a Dark Rum, so what? And, if it were a Bourbon, all us critics would be whining about what a damned weird Bourbon it is. Setting aside that one, admittedly-subjective impression (you may not think it tastes like Bourbon at all), just on its own merits, I found it absolutely bewitching; a flat-out delicious glass of booze that shows engrossing complexity, bold and yet balanced flavors, an absolutely beautiful finish, and purely as a sipper, lightly chilled and given about two drops of spring water, a near-perfect drinkability and wholeness. I’m sure you could mix it and it would be a great dance partner for some lucky bartender’s best ideas but what for? It’s a lovely, refined sipper and deserves to be treated that way. This is a mighty, might Rum that gives you everything you could possibly want.  97 Points

Now…for the best part: these three stunning rums are among the best bargains to be had in the entire world of spirits. The Light and Dark Estate Diamonds are – hang onto something! – about TWENTY DOLLARS on store shelves. The Single Barrel…THIRTY! These are major values and Beam Suntory is to be congratulated for setting this sort of price scale for rums of this caliber. Whatever else you may think about corporate buy-outs of family-owned wineries, breweries, and distilleries, a large corporation with deep pockets and its corporate head in the right place about maintaining quality versus just making $$$, can do marvelous things toward giving all of us adult beverage fans great, solid sips at sane, reasonable prices. And however quasi-conflicted this Valentine from me may be…it’s still a Valentine.