Around our house, on New Year’s Eve, we believe in doing it up right. As a wine reviewer, I taste a small ocean of new stuff, every year, and decided a long time ago that, for an occasion as special as the turn of the calendar, I can damned well bite the bullet and spend some $$$ for a bubbly that measures up to the mood of celebration and those happy phone calls to the kids.

But…several times, it’s been something that costs less than $20 but could cost $50 – $80, in a realistic world. Those tend to be my favorites; the ones I remember best and most fondly. For the first NYE that I spent with my darlin’ Judye, we took a bottle of Freixenet “Carta Nevada” and one of Gruet “Blanc de Noirs” in a backpack, went down to the Space Needle, and sneaked discreet sips of the Freixenet, finishing off with the Gruet at midnight. The Gruet is one of the best sparkling wines made in the US and it will run ya about $15. The Carta Nevada…about $8.

This NYE, I got a box in the mail of two new bubblies from Vilarnau, the fine Spanish producer of sparklings, and it was like old home week. I’ve sold the wines from Vilarnau and its parent company, Gonzáles Byass, for years. One of my favorite newer upper-tier bubblies is from Vilarnau – their collaboration with famed Spanish interior designer,  Antonio Miró, which resulted in the flawless “Albert de Vilarnau” Chardonnay Pinot Noir and its uber-sexy sister, “Albert de Vilarnau” Barrel Fermented, a blend of Chard and the two stalwarts of Cava, Macabeo and Parellada.

But in this box were two Cavas in their party clothes. As the photos attest, these two – Vilarnau Brut Reserva NV and Brut Reserva Rosé NV – are packaged with entertaining in mind. Doesn’t have to be entertaining a horde of guests, either. For Judye and me, just enjoying each other’s company on a cold New Year’s Eve, the Brut Reserva was a nice accompaniment to our pajamas and appetizers and the wine was…well, borderline shocking.

I’m sometimes just about beggared for words when tasting some obscure, inexpensive bottle of wine or whiskey or experimental ale. And in the wine realm, this most often happens when tasting Spanish stuff. I vividly remember opening bottles of Bodegas Atalaya “Laya” 2010 or Tomàs Cusiné “Vilosell” 2009 and taking an hour, with a forklift, to get my jaw off the floor. BOTH these Cavas had that same effect. For the record, the aforementioned “Laya” was ten bucks. The “Vilosell” was fifteen. And these two startling, eye-popping bottles of what is intended to be simple, unassuming Cava will each run ya about $15, retail, and I betcha, in the run-up to St. Valentine’s Day, you’re going to find astute wine shops and supermarket wine departments – the ones that do their own ordering, anyway – putting this bottled pleasure on sale for around $11 to $13.

What you’re going to get for that measly outlay is one of those rare chances to buy cheap what should sell dear. Vilarnau winemaker Damià Deàs, a veteran of the fabled wine world of Miguel Torres and Family, has guided this winery ever since Gonzáles Byass first acquired it and is arguably one of Cava’s finest technical minds. With these unassuming wines, he has knocked it out of the ballpark. These are distinctive bubblies: balanced, crisp, elegantly constructed, dry as a Stephen Fry insult, and lavishly flavorful. And those qualities are not uncommon in the tiny universe of Spanish sparkling wine. I go out and spend actual American dollars on wine very seldom and when I do, I’m the pickiest SOB on Planet Earth. But when buying Cava, I often buy whatever’s new, even if I know squat about the winery, because Cava is arguably the most reliable wine region in the world. The clarity and purity and freshness of the fruit is startling and the minerality – that hallmark of fine Champagne – is up front and unmistakable.

However snotty it may be to say it, it’s the lack of that mineral character that leaves me a bit unmoved by many American sparklings. The fruit flavors are as appealing as Cava or Italian Franciacorta or Prosecco but they are frequently all that’s there. With Champagne and Cava, there is the layering of minerals and soil and groundwater and yeasts and vegetation and all the added interest that brings to your glass. In the case of these two, those sweet mineral notes come roaring out of the glass, both on the nose and on the palate. DO NOT be confused about this: Spain was producing excellent sparkling wines for centuries before the first one was produced in America. They have a deep and very serious history of innovation and technique that shows up in every glass and that ten buck bottle of Cava that you pass up without a thought, to grab that highly-rated bottle of California or Washington or Oregon sparkling, is quite often just a fundamentally better wine. Proving that is dead-easy: put your California bubbly and one of these in bags and pour both for friends. Ask them which is better and then pull off the bags. I’ve done it. Out of my twelve guests – all wine trade professionals – and the four wines on the table, the Cavas were the number one choice in eight tasting sheets. And the other three wines? One California, one Washington, one Oregon and all well over $25. The Cava was…$9.99.

The Vilarnau Brut Reserva, an all-indigenous blend of 50% Macabeo (which you may know by its more common name, Viura), 25% Parellada, and 25% Xarel-lo (zha-REL-lo) is just flat elegant. Tiny, persistent bubbles, gorgeous tree fruit character, grace notes of apricot, red plum, quince, anise, and fresh cream.  It’s light and refreshing but substantial; like drinking a big red in its gravitas. Its conspicuous grace doesn’t for a moment undermine its distinct earthiness and approachability. You need exactly zero wine savvy to appreciate this wine. Just open, pour, sip, and enjoy.  93 Points 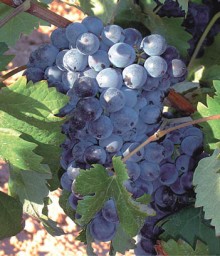 The Vilarnau Brut Reserva Rosé is a blend of two of the most aggravating, ill-tempered, Bad Boy red grapes known to oenology: Trepat and Pinot Noir. Trepat is a wholly-indigenous Spanish grape. It is grown nowhere outside Spain and there are less than 3,200 acres of it in the entire country.  It’s finicky about the dirt that it will deign to grow in, performing grudgingly in calcium-rich soils, which means that anywhere that is primarily calcreous, like hillsides where erosion and landslides have exposed strata of limestone and chalk, is not going to be a safe bet for Trepat – and there is a LOT of calcreous soil involved in MOST great wine regions. It is not, unlike its French cousin, Pinot Noir, very prone to most fungal diseases, though, so it usually survives in quantities sufficient to let wineries bank on it for their sparkling production.  The worst aspect of the grape is an early bud-break that leaves it susceptible to frost damage. It doesn’t like altitude a whole lot, so it’s mostly grown on floors of valleys, but its thick-skinned stubborness makes ripening problematic, which may be why it’s used mainly for sparkling wines, in which ripeness isn’t as much of a factor.

In your  mouth, Trepat is not at all “weird” or “sour” or any of those other adjectives folks sometimes use to justify fear of new grapes. Its primary flavors are ripe raspberry, remarkably authentic strawberry, and emphatic rose petal flavors and aromas. Framed by the Pinot Noir in this jazzy pink, the flavors lean to those red berries, with nutmeg and cinnamon and jasmine and pie cherries and dried cranberries. It’s a GORGEOUS bright reddish-pink in the glass and shows showers of fine-grained bubbles. If this were put into a Champagne bottle, there would be a lot of people who would drink it and go back for seconds and never question its origins for a second. This is a slam-dunk value in sparkling rosé and one that doesn’t rely on the crutch of either residual or added sugar for its mad appeal. It’s dry and elegant and long and I plan to drink it regularly, for no other occasion than, Hey, it’s Tuesday!  94 Points