In writing this marginally lucid website, I have religiously – complete with faux-Catholic genuflection and infrequent confessions – avoided reviewing anything that the average beer, wine, or whiskey fan is never reasonably going to be able to buy.

At 28 years of age, here is a list of the stuff that the new Laphroaig 28 Year Islay Old Single Malt can and cannot do:

Of that list, the only one that really bears upon this review is the last one.

Laphroaig 28, let’s just get this out there, sells for a cool $800 a bottle. You read that right: EIGHT HUNDRED DOLLARS A BOTTLE.

Now, this is Scotch, remember. There are LOTS of bottles of single-malt Scotch out there that sell for waaay more than this. In fact, this isn’t even the most expensive bottle in their own line. Wine-searcher-dot-com lists the Laphroaig 31 at $9,901 and the 40 at $7,554. And this 28 is a LOOOOOONG way from the most expensive in their own ‘hood. Hang onto something…

For what you’d pay for the Isabella’s, you could buy SEVEN THOUSAND, SEVEN HUNDRED AND FIFTY bottles of Laphroaig 28, which I would, absolutely. Hell, this stuff is a bargain, if you think of it in the right context…

…which would be stoopid. It’s $800. That’s EXPENSIVE. That means that I will never own a full, 750ML bottle of Laphroaig 28. Never. I might be able to afford it but I am so epically cheap that – as long as I never opened my mouth and aired my twangy, mumbly hillbilly accent – I could live in Scotland and pass without even changing clothes or my drinking habits. I was sent a roughly 5 oz. sampling bottle and was tickled to get even that. I’m nursing that like a new Mom and boy are my breasts sore. (rim shot) Thank you, I’ll be here all week! 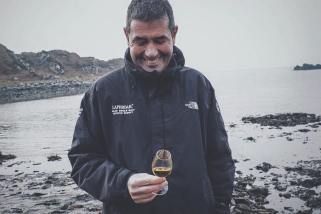 Bottom line: this is spectacular, paradigm-shifting, pants-dropping, eye-popping whiskey. Is it the absolute best Scotch I have ever tasted? No, not absolutely, but it is close. Very close. The main thing it is…is a testament to the unerring palate of John Campbell, the first Ileach (native of Islay) to run Laphroaig in its 190-year history. Campbell is a blender of whiskey the way Mozart was a musician. The aroma starts with that classic sea salt and peat tang and a definite whiff of fresh figs, sumac, creosote, brambles, a hint of baking spices, and a bold jolt of sweetly seasoned wet oak barrel. The wood notes are a tad musty but in a flattering way one would expect – and probably demand – from an extended-aged whiskey. The wood follows powerfully onto the palate, along with baked pastry, a gorgeous malt sweetness, a vague hint of my uncle Jerry’s pipe tobacco, vanilla (which, at 28 years, should be fading but isn’t), and baked apples, all whispered rather than shouted. The texture of this stuff almost defies description. Think “silken, glycerine-like, and viscous” and double that. Maybe triple it. The reductive properties of barrel-aged spirits are on stunning display, here. Whatever share the angels took of this whiskey, they didn’t get the best part of it. That’s in my glass.

The finish is lingering and subtle and offers intimations of herb tea, smoke, and cherry bark. Those who would just dump this into a glass, toss it down quickly, and swallow without hesitation are missing 90% of its charms. This is a whiskey to appreciate, on every level, from taking your time with the aromas to that first exploratory sip to leaving it on your tongue while the flavors unfold and to slowly swallowing and lingering on that jaw-dropping finish.

Let me add this: when I say that this is not strictly THE best Scotch I’ve ever tasted, that’s all analysis and professional habit. Once you get past a certain level of quality, with a Scotch or a Bourbon or a Brandy or a craft beer or a fine wine, that analysis is nothing but nit-picking. And we’re not drinking nits, folks. That don’t matter at all in terms of enjoyment. Is this worth $800 a bottle? That’s relative. Bill Gates could order six cases (or buy the distillery) and not turn a hair. I would have to unclench my bank account and my part-Scandinavian sphincter and have a forklift to drag the credit card out of my wallet but I would probably enjoy that bottle hundreds of times more that Bill would. If you’re flush and your drinking habits are buttressed by some serious disposable income – or if you want to give the Christmas Gift from Valhalla to your Scotch-geek loved one – this may just be the stuff you’ve been waiting for. Even Gates would maybe blink a bit before shelling out for the Isabella’s. This is possibly, if you redeem all your pop bottles, doable, in a lifetime. And if you Can…