Coming up on the heels of Double Mountain Brewing’s release of a rather, ahem, brutally fine Brut ale – one of the few Pacific Northwest breweries to have turned that trick – they’ve now carried that Felix Unger-like cleanliness fetish to its logical next step, with a juicy (which is normally a synonym for “hazy”) IPA that tastes and feels and finishes like any of the other better hazy ales on taps, here in our soggy little corner of America…except that you can see right through it. No, I don’t mean that they’re trying and failing to fool anybody. You can literally SEE straight through the contents of this glass.

I know! Beer was clear, in the past? How kinky is that? And you couldn’t even get a damned guava mango yogurt oatmeal cookie gingerbread milkshake IPA to save your ass! How did the human race even survive?

And there is an even kinkier little secret underlying all this reactionary filtration: it’s really NOT necessary to brew a beer that looks like somebody stuck mango chunks, cream gravy, and a mild ale into a NutriBullet and whipped it to a heaving froth to have a fruity, exotic ale. Who knew? It’s a brave new world out there and though the weather report looks pretty cloudy, right about now, there are times when it really is not.

Next Big Thing: beer that tastes fruity and rich but isn’t hazy.

But hardly without precedent. Ninkasi “Tricerahops”, Stone “Delicious”, Deschutes “Fresh Squeezed” and “Hop Slice” and “Chasing Freshies” are all fruity as heck and clear as good intentions. Hundreds of Belgian-style ales show powerful fruit notes, just from the use of those pervy yeasts. And, of course, we have fruit-infused ales that you could read the fine print through. None of this is new and, sooner or later, that pendulum will swing back. Hazy beers will NOT disappear but they will become passé, eventually, leaving behind the best aspects of the style and one or two hazys in most breweries’ rosters…all as it should be.

If you know anything at all about Double Mountain Brewery – or, indeed, about the character of the tiny beer Brigadoon that is Hood River, Oregon – it will come as no shock to discover that DMB has just released a beer that cops to the intention of easing out, just a tad, of the Hazy Rut.

“Juicy Clearly Not Hazy IPA” is a big, (yep, sho’ ’nuff) JUICY ale that lays on the fruit impression with a trowel and follows it up with some assertive, edgy, layered hops bitterness tinged with even more fruit. This is a wildly crafty little bugger of a beer; almost subversive, in a way. It hits the palate like a mega-whopper Imperial IPA and finishes crisply and with resins galore…and weighs in at just TWENTY-FIVE IBU! Their website downplays the bitterness a bit, saying, “Pour in to a dense tropical rainforest dripping with the sticky, delicious mango, kind herb, and ripe orange. The taste of the tropics continues in the rounded body, leaving only a whisper of bitterness.” Well, “whisper of bitterness“, my ass. If this is a whisper, it’s like one of those whispers you hear in a movie theater from fifteen rows away, as someone who lacks the capacity to dial it down tries anyway and fails. There is bitterness enough here, even with that scant IBU, to make even the most devout HopHead sit up and bark. 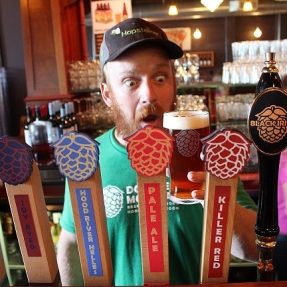 I have heard the term “goofy-ass mofos” used to describe Double Mountain. I’d never say that but that makes them My Kind of People.

Past that, let me put in a loud second for that mango and ripe orange, and add in the tangerine and star fruit and guava and gooseberries that I detected, along with a citrusy underpinning that mixes preserved lemons with pink grapefruit and lime zest. The theme, here, is “FRUIT!” and it’s oozing from every sip. Even at that, though, the creamy textures and the gorgeous integration of the hops make this a hoppy ale that even craft newbies can drink, again and again, and completely enjoy.

Which was, I believe, the exact Point of “Juicy Clearly Not Hazy”.

Double Mountain has been one of those breweries that only hit the rare and debatable clunker (and there is a TON of disagreement about which were clunkers and, in fact, if they ever existed at all) but, as they get older and hone their act, those days are behind them and their expertise and judgment adds up to not releasing anything – EVER – that comes off as ill-advised. In watching the breweries of this region for the past 28 years, I’ve seen the absolute slam-dunk certain dynamic of breweries that manage to survive past X number of years becoming very nearly Deschutes-level certain in their rosters and evolving into actual genius in certain styles. And that “X” is a different number for every brewery. I have no problem naming some of those companies:  Fort George Brewing, pFriem (faster than anybody, ever!), Walking Man Brewing, Old Schoolhouse Brewing, Snoqualmie Brewing, Full Sail Brewing, Upright Brewing, Hopworks Urban Brewery, Laurelwood Brewing, Sound Brewery, Boneyard Brewing, and now you have to add Seattle’s two urban superstars, Reuben’s Brews and Holy Mountain Brewing (second fastest), arguably two of the top new breweries in the US.

And Double Mountain Brewery is now entering that phase.

“Juicy Clearly Not Hazy” is a big, fat, JUICY milepost in the evolution of PNW brewing and it’s going to help change your mind about whether Life Without Fog is possible.