Jesus, what would that be like? Click over to The Pour Fool and read something shorter than 1000 words? Unprecedented!

Deschutes “Jubelale” was first brewed in 1988. 2019 makes the 31st edition of this ale and every single year, without fail, I have tasted this stuff, gotten all gooshy, and bought a minimum of three cases, to get me by until July or so. No, I do NOT care that the hops recede after a while. No, I do not care if it was supposed to be consumed in a couple of weeks. No, I do not, as one reader suggested, back in 2011, think it’s “icky” when the hops fade. And, NO, let’s stipulate that it is not designed to be an age-worthy, lay-down beer. But it IS a seasonal beer and I have done everything short of bribery to try to get Deschutes to make it year-round.

No dice.  “Seasonal, dude,” they have gently repeated, about, ooooh, twenty-two times, now.

I plan to keep asking. 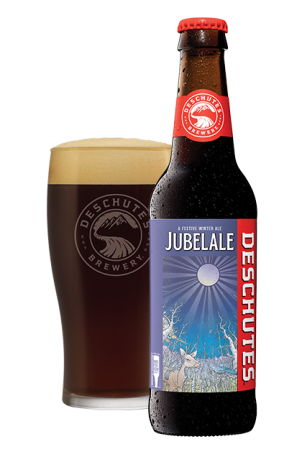 Deschutes Jubelale is one of the best beers in the world. It has been for thirty-one years. It doubtless will be for the next thirty-one. It has changed a bit, with the times. Back in the early 90s, when I first tasted it, it was a lot more malty, as befitted the times when we were just starting to stand on our own feet as a beer culture and had not yet dived headlong into The Great Hops Scare. Beer, back in the early 90s, was allowed to be malty, with background hops. Today, a beer without forward hops had better be Bourbon barrel aged and black as road tar and even those, today, usually show an elevated hops profile.

Through all this, Jubelale has never wavered. It has changed, slowly and subtly and as attuned to the current tastes as an atomic clock.

Here’s what does not change: Jubelale shows rich, mellow, dark caramel, vanilla, black cherries, baking spices, roasted nuts, a fat tinge of citrus, a fine edge of toasted grains, malt, and subtle hints of cocoa and cafe au lait. The backbone of Jubelale has changed very little at all, retaining a fat, chewy texture and just adding in resins and herbs of some well-integrated hops and a molten bronze color in your glass that’s as sexy and alluring as Halle Berry. And this year, it weighs in at a strappin’ 65 IBUs, giving it as much hops oomph as many single IPAs…and yet it is stylistically nowhere near an IPA.

I could go on, here, but I HAVE gone on – annually, for the past twelve years online and in print for seven years before that. Here are some clips from past reviews:

FROM 2012:  “At 25, Jubelale is still one of the world’s best fall/winter seasonals. If you’re a beer lover and you’ve never tried it, you’re missing one of the most fully-realized, replete, flavorful, and purely accomplished beers of any style, made anywhere in the Beer World. I never drink this ale and just mindlessly quaff it. For me, this beer is always an Occasion.“

FROM 2010:  “Of all the world-class beer that gushes out of Deschutes every year – several the absolute best of their types I have ever tasted – Jubelale is my absolute favorite. No, it’s not the profound edifice that is their dazzling “The Abyss” – my vote for best American Stout ever made and the single best beverage of any type I’ve ever tasted – and it’s not the jazzy, racy, earthy miracle that is their classic fresh-hopped Pale, “Hop Trip”, but it’s more…intimate, somehow. More special. More the stuff of memories and Good Cheer.“

THIS, from a photo (why I still have this, I have no earthly clue) of a long-ago Point of Sale sign I posted in the beer section of Town & Country Market, on Bainbridge Island, where I worked as a wine steward…in 1998:

“Yeah, sure, you can drink your reflex Chardonnay or Zin for Christmas dinner or sitting by the fire…but you could also have An Experience. Deschutes “Jubelale”: one of the world’s best beers and an absolute American classic. Malty, rib-sticking, rich, stunningly delicious, and perfectly  balanced, Jubelale is to your knee-jerk Bud and Miller as the space shuttle is to a paper airplane. THE perfect ale for the Holiday’s entertaining…or just for You.”

There is not a single thing in all that to correct or to take back. Jubelale remains the towering Achievement it was in 1988, though all the years, all the changing brewers, all the annual variations in grains and hops, all the changing tastes, all the fads, and all the (subtle, thoughtful, perfectly-executed) evolutionary changes in recipe. In all of American craft brewing, there is only ONE other ale that even comes close to measuring up to this, Sierra Nevada “Celebration”. I wrote that for a Scottish website, back in 2009, and a reader asked me which I would choose. I still have that email, too: “Choose? Why in God’s Name would I choose? I can drink ’em both! And I plan to do just that.“

Finally, since I do get the last word, here…

FROM 2011:   “As I sat with Judye, on a warm afternoon, on the patio, sipping that first ounce of this 2011 Jubelale, I rolled my eyes and looked at her through lids narrowed by a big ol’ crap-eatin’ grin.

“I don’t honestly know why I ever drink any other beer,” I sighed.

“Oh, you say that every  year,” she smiled, with a dismissive wave of the hand.