Every time I taste a new release from Stone Brewing, I hold my breath. My seemingly life-long passion for this brewery always seems a little…imperiled by the sheer adventurousness of their ambitions and the way Mitch Steele and company seem to delight in leaping off of stylistic cliffs without even thinking about how they’re going to land. I keep expecting “Splat!“, in short, and Stone, like some slightly sinister Nadia Comaneci, just keeps on sticking the landing with almost disdainful grace.

I recently asked, in a thread on FaceBook, what any brewer can possibly do to advance the art of the style of beer that’s been most beaten and dissected in our past collective decade: the Imperial/Double IPA. Yeah, yeah, yeah: new hops are (literally) cropping up every year and those will lend some different characteristics to the brews but c’mon…barring the sudden discovery of some undiscovered bud that expresses itself in some entirely new way, most of the flavor possibilities that Humulus Lupulus is physically capable of are possible to obtain by the artful combination of existing varieties. In terms of completely new flavors, hops are somewhat tapped out. And the variations that are emerging perform in shades of subtlety; niggling variations that recall the endless succession of Pinot Noir made in Oregon, in which minute flavor variations are all that separates most wines from one another. 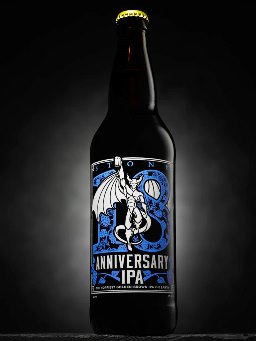 So, Stone – which has made its reputation and stylistic bones on True Hoppiness – announces its Stone 18th Anniversary IPA and I think, “Good Lord, can they possibly do it again?”

Oh, me of little faith…Of course Stone can do it again. And the proof is right in this bottle.

The label calls this “The hoppiest Golden-Brown IPA on Earth“. Admittedly, this is not a crowded competition. Most breweries wouldn’t even think of making this ale; taking the hackneyed idea of a Brown Ale – one of the most tapped-out British traditional styles in the entire craft beer canon – and more or less reinventing it. This collision of a Stone Anniversary IPA and the weary Brown is at least as much about its malt bill – English Brown Coffee, Cara Munich and Chocolate Wheat malts – as it is about the barrage of resin bombs (Nugget, Centennial, Belma, Sterling, Hopsteiner 06300, and El Dorado hops, singing in six-part harmony) that give it its whopping bitterness that perfectly balances out the sweet, melting malts. It is at once achigly mellow and resolutely bitter, with a distinct character of lemon curd smeared liberally onto warm, whole-grain biscuits. The use of the El Dorado hops add zingy citrus notes galore, but in a soft and juicy way that allows this big, expansive IPA to be enjoyed by even the greenest craft beer newbies. It is, simply put, stunningly delicious; yet another in a seemingly endless succession of Stone experiments that seem to defy brewing expectations and traditions. The resins are, in true Stone fashion, right up front and aggressive but they’re counter-balanced by a HUGE and rich overlay of caramel, bran cereal, grilled bread, honey, biscuits, apples, and ripe pears, all laced sweetly with notes of fresh citrus peels. It’s chewy and substantial and almost startlingly smooooth. In a word, “sumptuous”, a term rarely applied to a Brown, these days. Because of a shipping snafu, I’m ridiculously late in reviewing this beer and it kills me that many of you will find it already gone. This is, IMHO, one of the best of the long line of Stone Anniversary editions and missing it is something no serious craft beer fan should do.  95 Points 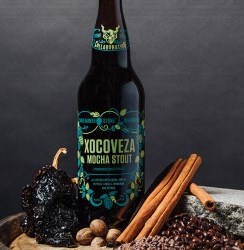 Stone/Chris Banker/Insurgente “Xocoveza” Milk Stout (Show-coe-VAY-zuh) is a collaboration of the type that Stone seems to be embracing more and more these days…and which I loudly and emphatically URGE them to continue. Brewmaster Mitch Steele created this new style of American-Mexican hybrid ale with Cerveceria Insurgente, a newish Tijuana brewery that marries Mexican flavors with American craft brewing techniques. Also on the team was Stone AHA American Homebrew Competition winner, Chris Banker. Using a base of a mild, pleasant, but nicely roasty Milk Stout, Steele, Banker, and Insurgente’s Morales brothers, Damian and Ivan, loaded this beer with a beautiful, easy-drinking flavor profile that includes cocoa, coffee, chile peppers, vanilla, cinnamon, and nutmeg.

Damian and Ivan Morales of Insurgente

Before you go thinking, “Ick! Too sweet!“, let me observe that I live with one of the craft beer world’s foremost sugar detectors, the Incomparable Judye, who finds offensive levels of sweetness in beers that I frequently think are perfectly dry. To the Judye Palate, this beer was sweet – as Milk Stouts frequently are – but not sweet enough to produce the dreaded Judye Wince which signals that I will now have the entire bottle of that beer to drink. (Damnit.) And, indeed and for once, I agreed. It is pleasingly sweet, which is to say a fine, subtle edge of residual sugar that just emphasizes the soft, light chocolate flavors and transforms the coffee into a cafe au lait. The chiles, which put off thousands of people who equate them only with a bowl of chili, are subdued and, as in the Mexican chocolate (think Iabarra, the crumbly stuff in the bright yellow box) that this ale is patterned after. The net result is, dare I say it, sexy and voluptuous, like a roasty cup of medium-roast coffee with syrups, a cinnamon stick, and a vanilla bean. The flavors are almost uncannily fresh and authentic which, of course, comes from Stone’s philosophy of never using processed anything when the real stuff will work better. Each of the flavors mentioned is emphatic and discrete, all presenting in perfect balance. Even the nutmeg, a notoriously laid-back flavor which is easily buried in pies, cakes, and candies, is bell-clear and balanced.

Stone’s collaborations are becoming the stuff of legend and, in the small universe of chile ales, this immediately ascends to the top of the pile. They evidently made a fair amount of this, so most people who live in a Stone distribution area should be able to find it. It will not, naturally, be for everybody and, in fact, I’ve spoken with people (usually craft beer newbies) who have summarily dismissed Stone because they tasted Arrogant Bastard or one of the extreme IPAs and decided that those are the book on this brewery.

Those are Stone’s signature ales, yes, but they are NOT the book on Stone, at all. As much as any other top-tier American craft brewery, Stone has a mind-boggling range and versatility and the idea of making a sunny, friendly, subtle ale like this is not even remotely anathema at Stone World in happy ol’ SD. Xocoveza is and will remain a landmark in collaboration ales and one of this year’s true Creations.  96 Points