I played several sports in high school and on into college at Maryland; not at any elevated level but it’s in my blood, y’know? As any former athlete will tell ya, you’re going to be a sports wonk for life. And, way back when in North Carolina and Tennessee, I did a bit of sports writing…so I know just enough to be dangerous. Not to mention that the whole idea of me presuming to second-guess Super Bowl winning Coach Pete Carroll and his Super Bowl winning Offensive Coordinator, Darrell Bevell, is flatly ludicrous.

Sometimes the proper tool for the job is a Computer. And sometimes it’s a Hammer.

You are – by virtue of one of the most heads-up plays in the history of the Super Bowl, comparable only to David Tyree’s hand-to-helmet miracle vs. the undefeated Pats – on your opponent’s five yard line, courtesy of Jermaine Kearse’s deft hands and laser-focused brain. You run one play, a dive off tackle that gives you four fifths of what you need to take another Lombardi Trophy back to Seattle to decorate that big ol’ lobby at the V-MAC. The Patriots defense is tired, just like yours is. You have little time and three more whacks at The Promised Land.

Sometimes the proper tool is a Computer…You’re up against Bill Bellechick, legit candidate for the title of greatest NFL coach ever, noted for his intricate offense schemes, his precision, his multiple formations, his brain. He has probably already thought of everything you’re likely to come up with. You need to out-think Bellechick…right?

No…sometimes the proper tool is a Hammer.

One of the bedrock principles of all sports is Possession of the Ball. I cannot think of any significant sport in which the object is to give your opponent the…puck, ball, stone, whatever. And for a team like the Seahawks, which has as its virtual mantra the phrase, “Take Care of the Ball“, the smart move is to keep Two Hands On The Ball. It’s fundamental: you are far more likely to have the other guys take the ball if it’s out of those two hands and flying around loose than if you have your freakazoid, minotaur-like running back clutching it like it’s the last helicopter strut on the last bird out of The Fall of Saigon.

There were a wide array of options available to Carroll and Bevell in that situation. But they got tricky; I believe, trying to outsmart Bellechick. What will Bill least expect? What did Bill plan for this situation?…because you KNOW he foresaw it. They could have tried the read-option, with Wilson and Lynch running in tandem, giving the defense two looks to deal with. The pass, if it MUST be a pass, could have been a fade route in the corner of the end zone and Wilson can either get a look he likes or put it ten rows up into the stands. Chris Matthews was playing out of his mind, had the hot hand, and had already proved that his coverage couldn’t go up over him to break up a pass. Wilson could have run the naked bootleg, the one play that probably kept Bellechick up nights because it’s impossible to predict what Russell is going to do.

The Hammer, On The Job

OR…you can dance with the one that brung ya, the running back with the greatest nose for the end zone currently playing in the NFL; a guy who takes on five, six, ten opponents and just keeps churning, fighting, and usually wins. Marshwan Lynch had just completed 4/5 of the task. He ran over a couple of Patriots doing that. Carroll said that, if they did not get into the end zone, they’d have to use a time-out. SO?!? It’s Game Time, the last 20 seconds. USE the time out. If New England stiffens up and beats you, smile a big sad smile, shake hands and say, “Ya got us“…instead of sentencing yourself to nine solid months of What-Ifs and Shouldas.

Carroll and Bevell deciding to strategize the last seconds of the biggest game of their year is like a guy who has to join two boards and looks at that job and then buys a $200 computer program, devises a plan in which a hand-held remote triggers a crane which drops a wrecking ball onto a fulcrum which raises a pad that taps a solenoid that operates a nail gun that’s held in a brace on top of the upper board, which then shoots one of those headless brads into the board and affixes it to the bottom board…maybe, if everything goes just exactly right. 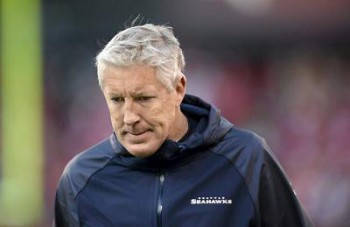 I’ve heard and read a lot of stuff like “Well, you seem to think that the Patriots had nothing to do with it! They played a fantastic game!” No..they did not. By their own standards, they and Tom Brady actually played a slightly sub-par game. They played well but not spectacularly. They were eminently beatable. Brady was Okay, not great and not even the Tom Brady of two weeks previous. This game was really more about the Seahawks and their judgments than about anything New England did or was capable of doing. There is absolutely NO doubt in my mind which team is better. It is clearly, indisputably the Seahawks. But, to quote a famous American, “Better is as Better Does, sir.”

Sometimes you need a Computer. Sometimes the complexity of the Job calls for that.

But, sometimes you need a Hammer. The Seahawks had the biggest, shiniest, most brutally-efficient Hammer that exists in professional football and that Hammer had three more chances to drive that nail. But he sat in the toolbox, unused.

Carroll and Bevell used the computer. It’s really no more complicated than that.