I firmly believe that the best Syrah on the planet, in 2015, is being made right here in Washington. Let me make that clear, first thing. I believe, in terms of nuance, complexity, fruit, growing conditions, skill in the winery, and that all-important detail – JUDGMENT! – in how this grape is vinified, barreled (or not!) and aged, we’ve now surpassed all but Hermitage and maybe Cote-Rotie in quality of these wines. 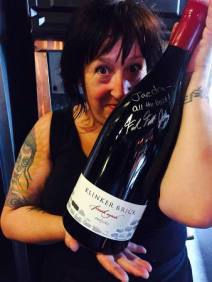 …if I’m going to drink a Syrah for the simple, ignoble purpose of just sinking up to my neck in deep, rich, decadent fruit and near-perfect structure – sorta the same impulse as drawing a very hot bubble bath and letting the water cover you up to your ears – I’m quite likely to run out to some well-equipped wine shop and buy this bottle from what is possibly the most unfortunately-named winery I’ve ever run across, Klinker Brick Winery, located in what is arguably California’s most fruit-intensive appellation, Lodi.

This post was inspired by seeing the photo to your right on Facebook, this morning, showing one of the 3 Liter bottles of Syrah that were given to Seattle’s near-legendary Bizzarro Cafe by the winery, in appreciation for their mammoth sales of the winery’s products. I’ve been at this trade, selling wine and beer and spirits, so long now that any real yen for specific bottles of wine is functionally gone and I rarely envy anyone having any bottle in their collection. But I saw this picture, of Bizzarro owner Jaedra James, holding this wine and actually got…just a tad jealous.

Klinker Brick “Farrah” Syrah is sourced from the weird and wonderful Mokelumne Valley region of Lodi, an area in which patches of tree-strewn hillsides alternate with arid desert dirt that makes the Oklahoma Dust Bowl look like the Garden of Eden. Into this schizo landscape, Steve and Lori Felton, fifth generation Lodi grape growers, decided to plant Something Else – a winery. In 2000, Klinker Brick was born, tragically named for the salvaged bricks, usually made around the 1920s, that are prized by builders for their dark, weathered appearance and, no less, for a lovely, musical “clink” they make when tapped by a trowel, a hammer, or each other.

The winery actually specializes in Zinfandel, the grape most strongly identified with the Lodi appellation, but the Syrah was there – some hanging on vines more than 125 years old! – and the idea of making this wine, named for their daughter, Farrah Felton-Jolley, was irresistible.

All the dry facts of KBW can be found on their website. The very wet and wonderful reality of Farrah, The Wine can only be found in the bottle. I’ve been a fan of this ever since I tasted the fourth vintage, the 2003, back in ’05. I’ve since watched  it get better and better as  time passes and have slipped it into both all-Syrah tastings and mixed tastings nine times, now. It has always emerged as one of the top wines on the tables. The last time I poured it, the 2011 vintage, was in 2013, for a group of 85 “serious wine lovers” at the Seattle Yacht Club. It was on a table with reds from Washington, Spain, France, Argentina, California, and Italy. We had three cases each of 16 wines on hand for sale. The only ones that sold out were the 2007 Chateau Paradis Provence and Farrah…and we took six cases worth of back orders for Farrah.

In the glass, it shows the hallmark Lodi ripeness and density. This is not one of those light ‘n’ elegant deals. Big reds are usually considered lacking some of the nuance and complexity of medium-bodied ones but this is a pleasantly complex, sophisticated red that fills out a truly prodigious fruit character – blackberry liqueur, plums, stewed raspberries, black currants – with a sweet herbal tinge, subtle minerals, and a flattering silkiness from its 15 months of barrel age. It’s viscous; the kind of red that currently gets dumped on by the wine intelligentsia but, as this blog is written primarily for normal, wine-agenda-free humans, I’d call it soft, deep, rich, sexy, and enormously friendly, like Lisa Leslie in a bottle. 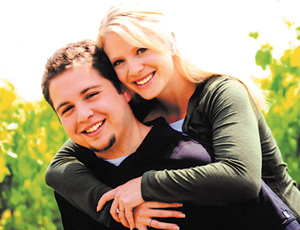 Farrah Syrah is – if you don’t have a stick up your backside and can appreciate the pleasures of a wine that is purely about the sensual enjoyment of a full-on red – a genuinely dazzling, impressive, and surprisingly wine geek-friendly Syrah.  And, no less importantly, it’s very nearly cheap!  About $20 a bottle(!) Really.

Those “serious” types who can drop their pretensions and presumptions will be rewarded with a wine that’s truly engrossing to drink and nuanced in a way that lives up to truly deep analysis and patience. For the rest of us who already like big, generous Syrahs, this may just be the wine you’re always dreamed of when sipping Syrah and wishing for More.   94 Points