The months between May 1 and October 3, 2015, are what I’ve come to think of as “My Five Months In The Fog”…That’s “The Fog” as in John Carpenter. It was…heinous and, if you’re turned off by the spectre of an overgrown man whining, stop here…

…but we had decided to renovate and sell our condo in Bellevoid, Washington, and build a brand spankin’, totally accessible house in Tacoma, about 40 miles down the road, and decided that I would do about 85% of the renovations. I’m fairly handy and have made the tragic mistake of letting Judye know this, so I was nominated (seconded and summarily elected, all by Judye) to do literally everything involved in the renovation except the new flooring. Plumbing, electrical, painting…Everything. I had a part time day gig and was writing my butt off, so the days were, uh, kinda full. It took well over sixty days and, at the same time, we were heavily involved in designing the new house. Atop all this…our son decided to get married in Mexico, which necessitated applying for passports, which neither of us had and which took weeks to do. And then shopping for the trip, making plane reservations, arranging dog boarding and cat sitting, and, of course, the trip itself: a lovely week with family and friends in 95+ degree heat, days crammed with activities, and eating stuff which stomped through our sissy little American-coddled digestive tracts like a herd of savory cattle flattening a canyon full of pampas grass. (Any six-day span in which I eat octopus, tongue, sea urchin, and huitlacoche is a red letter week.) Wonderful…but exhausting. Oy…vey.

I was Tired – TIRED! – and I slacked off considerably on The Pour Fool. And, right in the hot middle of that time frame, my pals at 21st Amendment Brewing finished their new facility in San Leandro, California, moved in, and brewed a brand new beer…named – after the former occupant of their renovated building, Kellogg’s – “Toaster Pastry“, for the Pop Tarts that rolled out of that space in an endless, sugary tsunami.

Walking about in my haze, I got the email announcing TP and was puzzled: did they brew a beer with mashed up Pop Tarts in it? I couldn’t rule it out, after watching breweries infuse beers with shiitake mushrooms, baseball bats, Reese’s cups, bull testicles, an entire Margarita pizza, yeast cultured from the brewer’s beard, coffee beans eaten and shat out by BOTH civet cats and elephants, and oyster shells (yep, 21A  did that last one), but it didn’t seem like the Shaun O’Sullivan I know. Rational guy that he (sometimes) is, surely he’d stop, at some point and say, “Wait a minute, Irish: Pop Tarts?” 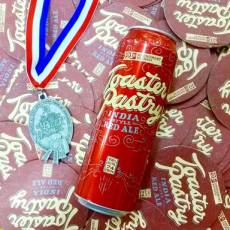 Turned out, happily, that it was not time for an O’Sullivan intervention, after all. 21st Amendment “Toaster Pastry”  is a Red Ale…wait, let me rephrase that: Toaster Pastry is a FREAKIN’ GIGANTIC, HOPPY, SEAMLESS, SPICY, F__KIN’ TEAMSTER of an ale. Even in my socked-in condition, with all my aesthetic airplanes firmly grounded, I sat in our paint-fumey condo and tasted Toaster Pastry and almost cried. I felt like a drowning man to whom had someone had tossed a life preserver. For the time it took me to down a can of this gorgeous ale, I felt like a normal human being, again, instead of the six-foot sac of heaving protoplasm that was my daily condition. I vividly remember sitting there on our new hardwood floor, glass in hand, heaving a deep, soulful sigh and thinking, “Jesus, O’Sullivan…I owe ya!”

Toaster Pastry is, simply put, now firmly ensconced in the Top Three of all the Red/Amber ales I’ve ever tasted. It may well be the best and I plan to do an A-B-C tasting of the three –  Bend Brewing’s “Scarlet Red”, TP, and Speakeasy “Prohibition” – just as soon as Bend gets some (long overdue) Seattle distribution or I get my lazy rump down to Bend. I MIGHT put Scarlet one scant hair ahead but, on the following day, I might think Prohibition is ahead and maybe a week in a row, I would choose Toaster. Can’t say for sure but, boy, is it gonna be fun to find out! Toaster does have one particular component that wins out over the other two: hops. You put Centennial, Ahtanum, Amarillo, and Mosaic in a beer and…well, you had me at Centennial. Together, they give this beer a beautifully complete framework of inspired bitterness and a taut finish that comes off as dry and crisp and edgy. This bonanza of resins is prettily balanced by a blend of six malts that imparts that soul-deep red tint and a creamy, elegant spiciness that carries a spate of grace notes like cranberry, ginger, jasmine, and baked peach. And the finish lingers for a full minute, ratcheting down slowly into a clean intimation of spice and biscotti. 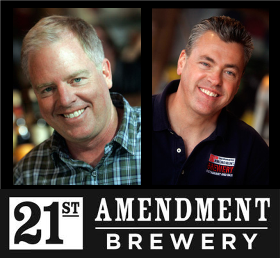 Shaun O’Sullivan and Nico Freccia of 21A

This is a GLORIOUS ale; one that serves as a Statement about the values and expertise of 21st Amendment and more than upholds the lofty quality standard that’s spurred their stunning growth. Shaun O’Sullivan and Nico Freccia, owners of 21A, are two of the most decent, hard-working, hard-playing, centered, down-to-earth, and focused people I know in the brewing industry. They’re growing at an almost exponential rate, not by virtue of marketing trickery or trendiness but by making beers that simply rise, from the first sip, to your Best Of Class lists and stay there, amiably meeting all challengers. I’m SO freakin’ late in writing this and I hope that A) Shaun and Nico will forgive me and B) that there’s enough Toaster Pastry left for YOU to grab a four pack of those elegant, festive 19.2 ounce cans, a man-sized drink that will delight even the weariest of taste buds to the very last drop.

Shaun, Nico…Thanks. When I was at my most exhauisted and discouraged and thinking to hell with it, one evening with a Toaster Pastry completely changed my attitude. I owe ya. So, I’m gonna go buy a shitload because…for some reason, I’m suddenly very thirsty!    97 Points