I’ve willfully violated the spirit and purpose of this blog a few times, now; once about politics and twice about football.

Today, I’m going to do it about something that’s actually important.

David Bowie was a part of my life for nearly as long as I can remember. Because of an illness I had about 20 years ago, my memory is spotty about a lot that came before it but I remember first becoming aware of him in 1968, as a high school junior in Chicago, just after the release of his first album, “David Bowie”, in late 1967. I heard three  cuts from it on Ron Brittain’s Subterranean Circus, on Chicago’s WCFL, late one summer night, and laid there in my sweaty bedsheets, mesmerized.

As I read and heard more about him, well, I was confused. Was he…gay? Straight? Just an artsy poseur? Genuine? WHAT?!? It seemed, at the time, very important to figure him out and to be able to pin up his dissected carcass on my mental display board, with a convenient label affixed. The damned guy just refused to hold still long enough to allow that to happen. I didn’t know what to think. All I knew was that, when I listened to those songs, I felt as if a tuning fork was vibrating in my chest, somewhere. It was a new sensation. I was already a devout music fan, having fallen hard for The Beatles and the Dave Clark Five and The Steve Miller Band’s “Sailor” and The Spencer Davis Group and Chicago’s own New Colony Six and The Flock. I laid there transfixed by Traffic and Quicksilver Messenger Service and Poco. And I adored this new bunch from Georgia, The Allman Brothers Band…and Jimi Hendrix was – and still is – my own personal muse. I was NOT, in any way, an Elvis fan. What I was…was that previous description: confused.

I was one of what turned out to be, at that pivotal moment in the late 60s epoch, rather a LOT of kids who felt as if they were permanent and immutable outcasts. I didn’t…fit – anywhere. I wasn’t quite jock enough – though I was an all-state track and cross-country athlete – and I wasn’t quite a full-frontal hippie. I wasn’t artsy enough, even though the arts were what drew me most strongly, because I already knew (or assumed) that the arts were not what a young man did if he expected to become affluent and established. Acting, music, performing…those were for other people. But I had less than zero interest in any occupation that might produce that affluence and comfort. I fought constantly with my father about growing my hair. He wore his flat-top with a fierce, backwoods pride (we were from the mountains of Virginia) and saw my failure to become his very own Mini-Me as some act of betrayal on the part of God and a vengeful Fate. He had, in my brother and me, two individuals; two young beings with little or no interest in repeating anything that came before us. We suffered his presence and his attempts at shaping us and he knew it. It was wildly unfair and I do not feel noble about it at all. But, at the time, I was as befuddled about this thing called “Me” as he was.

Into the midst of all this came the growing public profile of David Bowie, a young man who had roamed some of the roughest parts of London in a dress, singing songs that only incidentally had anything to do with the R&B or Blues-derived tunes that made up most of British radio and even less to do with the traditions of English pop music. He was sui generis, uncategorizable, weird, odd…other-worldly. He dressed and acted as..he…pleased. He was sensitive and freaky and poetic and magnetic and absolutely fearless. I, along with that LOT of kids my age, dimly grasped that he had to be that way. He had no choice. He was born David Jones but he was that febrile creation “David Bowie“, to his core, and the Jones persona was just a cocoon that the butterfly escaped and shredded with a vengeance, as soon as he possibly could.

And finally, as I was entering my junior year of college, that truth sunk in. David Bowie wasn’t a dim, remote public figure. He was my license, my permission to be who and what made me most fulfilled. That late Hippie generation of Americans produced some of the most creative and productive artists ever to arise from this country. It also produced some of the most deeply and persistently fucked up kids in the planet’s history. Many, many of us were unequipped to receive a Message like Bowie’s and it sailed right on past. We didn’t, as role models go, identify with Elvis and Motown and all those other purely American inspirations because we were just not that kind of creature. We had no affinity for or desire to perpetuate that leather-clad, hot-car, cigarette-smoking, swaggering, posturing ideal of American manhood. The ideas that Bowie preached and lived were not a part of the American psyche of the Sixties. Young men got married and settled down and joined the workforce, had 2.2 children and got a house in the ‘burbs with that iconic picket fence and two-car garage. They went into the military or into corporate jobs and they kept their noses to the grindstone and their heads resolutely down. And that was all as foreign to me as Swahili.

I started college as an architecture major and I may even have been happy working as one. I still spend some of my happiest hours looking at old buildings. But that wasn’t what gnawed at me. Bowie took the stuff of his rather meager life and created a broad and complex tapestry, boiling with color and vitality and Art. In that junior year, after two years of dabbling at theater, I changed my major to Drama, as it was called at the time. I played in a band, Daddy Lean and The Bacons, (I’m embarrassed to admit that I liked that name) and grew my hair down to the middle of my back. I started dressing strangely, obeying those whims I used to stifle. One day, it was a serape and sandals, like those California musicians I loved, David Crosby and Roger McGuinn. The next, it might be a herringbone jacket with elbow patches and a bow tie. The days to come might see me in scarves and headbands, ala Hendrix…maybe a buckskin fringed jacket and boots. I started reading writers like Kerouack and Burroughs and Arthur C. Clarke and then a full-out romance with the works of Theodore Sturgeon, who would later become my friend. I painted and sang and danced in a jazz dance troupe for a while. I explored life. It was a time for which I am eternally grateful; in which I found out enough of who Steve Body is that I’ve been able to operate this balky machinery of my own psyche and occasionally even steer it, fitfully, like a shopping cart with a bent wheel.

And all of that came from David Bowie.

There were periods, in that forty-eight years, when I almost forgot David Bowie, didn’t listen to his music hardly at all. Then, periodically, something would reach out of my radio or TV, after the advent of MTV, and yank me back into his world so forcefully that it was almost whiplash-inducing. In 1972, it was “Ziggy Stardust“. In 1975, “Young Americans“. 1977 was landmarked by “Heroes“. In 1983, he really seized me by the throat with “Let’s Dance“, which featured a blazing young guitarist named Stevie Ray Vaughn. Passing years brought other music that commanded my attention: “Tin Machine“, “Tin Machine II“, “Earthlings“, “Reality“, “Heathen“…and now, “Black Star“.

David Bowie’s existence reminds me of  that pompously cynical Voltaire quote we’ve all heard, “If God did not exist, it would be necessary to invent him.” That’s Bowie, for millions of us. If he hadn’t come along at that exact, perplexed moment in our collective, post-60s ethos, we would have had to invent someone very much like him, because so many, many of us needed an excuse, permission, a template by which to put ourselves in context. David Bowie gave me permission to be weird, to be me, to color outside the very restrictive lines of my times. He made it not only acceptable to “do your own thing“, he made it chic, fashionable, cool, hip, appealing…possible.

I remember vividly, back in maybe 1976, walking through a parking lot in Roanoke, Virginia, thinking one of those random thoughts that somehow lodge themselves in a dim corner of our brains and shake loose in random moments. It was a sunny day and I worked at a radio station. I had closed my show with “Suffragette City” and was humming it as I walked to my house. Unbidden, this thought crept into my head: “One day, David Bowie will retire or die, and all I’ll have are these records.” I remember angrily shaking my head and dismissing the thought as just more evidence of my occasionally morbid perversity. There was simply too much about Life within David Bowie for death to overtake him. I remember, after that flash of irritation, laughing out loud. “He’ll outlive me, that’s for damned sure,” I thought, and then went back to humming Ziggy.

I confess to not having paid him much attention for the past couple of years. Listening to him, for me, was always a private thing. I never shared him with wives or girlfriends or pals or co-workers. I listened to Bowie under headphones, afraid to miss any nuance, any inflection, any Moments in those sometimes-dense arrangements. I was selfish about him, proprietary. He was MY muse, my source, my invisible friend. 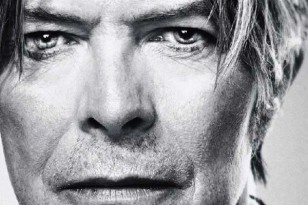 And now, has has not outlived me, the incredible bastard, and I’m sorta mad at him for that and have to keep reminding myself that, of all the beings who have existed during my times on  this planet, I have far less reason or right to ask for anything more from him than from any other person I ever met or even heard of. It is the height of self-involvement for me to want anything more from David Bowie, after the man very much, in a literal sense, gave me whatever this thing called Steve Body is, after these forty-eight years at such close spiritual quarters. So, I won’t ask it. I’ll value what I had and what he did for me, personally, and for the world in general. I do have those records. I can still whistle all those tunes and murmur all those lyrics that seemed to have been talking to me.

I like to have a great wrap-up sentence for the things I write; something that resolves those major and minors that sometimes clash in the prose. I don’t have one here; nothing that would do him justice. For that, I have to go back to that time when I “discovered” Bowie, to an author I was reading quite a lot then. Dickens gets it right, when all words fail me…

“…and can it be that in a world so full and busy the loss of one creature makes a void so wide and deep that nothing but the width and depth of eternity can fill it up!”
~ Charles Dickens