“We make the whisky we make because of the knowledge and craft that has been passed down throughout the years. Lore is our story, bottled – the richest of the rich.“

This is, in a very real sense, a love story.

Think of it: you make something with your own hands. You tweak and nurture and baby it and lavish obsessive attention on it. And then you put that thing away and realize that you may never even see the end product in your lifetime. I’ve written this about Scotch Whisky before but I still marvel at it; the almost monastic devotion to the Calling, the art of making a fine single-malt Scotch that will sit in a barrel for 25, 18, 15, or even just ten years, during which time the entire world will change and, quite possibly, the person who crafted that elixir may not even be around when it comes out of the cask. The sheer dedication of that act, the entrusting of your art to someone you may not even know, is stunningly poignant…except that you know they will finish it and it will be spectacular, because that’s the Laphroaig way.

I have a very strange reaction to seeing something done very, very well: I cry. I watched Michael Jordan play, with the flu, and still dominate the game and the playoffs…and I cried. I watch Anthony Hopkins act and I wept openly. I hear B.B. King’s “The Thrill is Gone” or George Jones’ “He Stopped Lovin’ Her Today” and a dissolve into a saline-drenched mess. I cherish that notion that people will do the extraordinary almost casually, without conscious thought, because it wouldn’t occur to them to do it any other way. There’s a soul-deep resonance in that, for me. And here, that same resonance lays upon me even stronger because, in the realm of A Thing Done Better Than It Needs To Be, Laphroaig has simply outdone themselves…and pretty much everybody else. 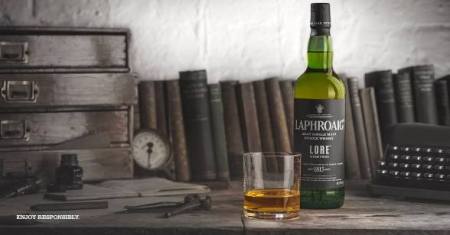 “Lore” is, in my opinion, one of the best bottles of Scotch ever made. No, I have not tasted all of them but I have tasted several hundred, in my time here on Earth, and Lore is unsurpassed by any I have ever experienced. My freakish sense memory being what it is, I remember the flavors of beers, wines, and whiskeys I tasted ten, twenty years ago. Name a Scotch and, if I’ve had it, I can probably tell you about it. In my opinion, this is equalled by only one Scotch currently on the market, for sheer, hedonistic drinking pleasure: The Balvenie “Caribbean Cask”. There is absolutely no similarity at all between Lore and Caribbean Cask except that they’re both Scotches. Laphroaig is from Islay (eye-luh), that magical island from which whiskys redolent of peat smoke and seaweed emanate. The Balvenie is Speyside, where that smoke and brine is not in the tradition. And yet, both are totally realized expressions of the same Scottish soul that makes people all over the world find a deep and unshakable bond with liquids made by strangers, half a world away. 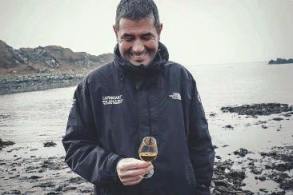 Laphroaig’s Distillery Manager, John Campbell, (what more Scottish pedigree could you ask?) is the author of the words at the top of the page. Makers of consumer products often produce poetic quotes for marketing purposes but I sense, in what I read from Campbell about this stunning whiskey, that the impetus was real pride; the confidence that he’s crafted something that is really, truly, gonna knock opinionated booze writers like me flat on our skinny Yankee asses. I think John Campbell – and all the rest of the folks at Laphroiag – know what they have here and that asking for opinions from pedants like me is like sticking a supermodel into our coat closets and watching us reach in for a hoodie. I think they know what I’m going to say because…damn, how could I not?

To put this massive, opulently-rich, mega-Whopper of a Scotch into some universal context, this whisky is, quite literally, The Missing Link. For generations, there has been that gaping divide between Single-Malt Scotch and our habitual American whisky, Kentucky Bourbon or Tennessee Sipping Whisky. Our KY/TN stuff is big, generous, sometimes bombastic in scale and sweetness, with massive doses of caramel and vanilla and lovely wet oak. Yeah, American whiskys are larger in scale than Scotches, for the most part, and those who prefer the American stuff routinely point out that difference, that mouth-painting fullness that Bourbon has over most Scotch. The Scots have long recognized this luxurious profile by using American Bourbon barrels to age their whiskys, adding just a flattering touch of that big caramel/vanilla excess. Scotch is more subtle, for a fact, and ours is more full-frontal, more aggressive, more…American. In cheaper American whiskeys, that magic is an illusion, achieved by use of additives and caramel color. But in great Bourbons, it’s all from Time and The Barrel. 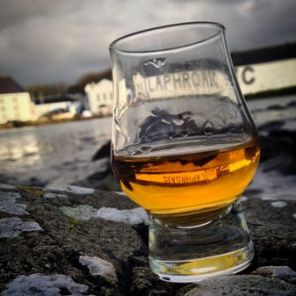 “Rich and smoky, with seaside minerals and a hint of bittersweet chocolate drops. Vanilla follows, with oily unroasted chestnuts and a hint of fudge, with a malty sweetness. A drop or water adds a clotted cream note with fruit appearing in the form of citrus in a flan glaze.”

Friends, this is one of only two times – out of 20,000+ reviews of wine, beer, and spirits – that I have been able to honestly agree with every single tasting note from a producer. Individual palates being subjective, I always find different aromas and flavors and routinely don’t get what they claim is there. The above notes were from the description of the nose of this stuff. I got most of it clearly on the palate, too, and every descriptor is dead-on accurate. 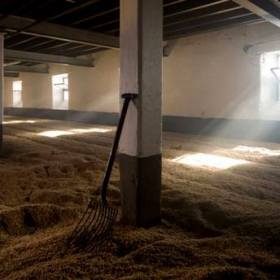 The hallmark Islay peat smoke is there, in spades, but laid over, like a silk scarf, a bed of rich caramel, wet oak, vanilla, toffee, citrus peel, cocoa, apple butter, figs, dried dates, roasted cashews, and that fabulous malt, derived from those floors at the distillery and never from a supplier’s sack. Even that fudge is there, a tongue-costing impression of just slightly bitter chocolate that tastes fat without becoming cloying.

Lore is fantastically rich; rich in a way that even few Bourbons ever match. For all those hard-core Kentucky and Tennessee geeks, this whisky is going to slap their preconceptions sideways. This is genuinely the Missing Link between the racy aesthetic of Bourbon and the mystery of Scotch. I defy any lover and student of great Bourbon to sample Lore and not get that gut-deep thrill I had in tasting it. There is only ONE thing that can truly motivate someone to exceed themselves, their own ambitions, and all expectations, whether it’s Jordan on the court or Hopkins on stage or B.B. King with Lucille in his hands…Love. Genuine love for your craft and what it stands for. As a summation of 200 years of one of the world’s great distilling traditions, this really is a Love Story…and John Campbell and company could not possibly have written it any better. 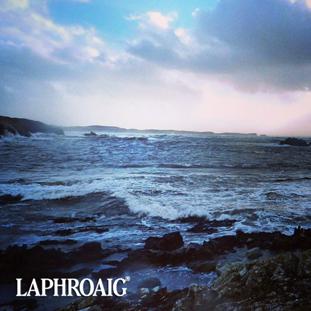 And, yeah, I cried when tasting it. That’s not going to surprise anybody who knows me. Because I try to find the miraculous amid the mundane, I do that a lot. But tasting this whisky was a singular experience. It was like watching Steph Curry so casually break his own records, as if performing at an other-worldly level was as easy as breathing. One of my favorite distilleries – hell, one of my favorite producers of any kind of alcoholic beverages – blows past all expectations and what most of us imagined was possible as though it were no big deal…But it is. This is a huge deal. Lore is the ideal expression of Laphroaig and simply one of the best whiskys ever to come out of Scotland…and I cordially invite you to try it and see if you don’t whole-heartedly agree…

NOTE: I left this out when I first posted, so, just to make sure there’s no question or confusion..  100 POINTS