I was recently sent a box of two different whiskeys from the brilliant, forward-thinking Scottish distillery, Auchentoshan. To be honest, here, because Scottish names usually – but NOT always – roll off my tongue, I had to go online to the Esquire Magazine Scotch Distillery Pronouncer videos, featuring the brilliant Scottish actor, Brian Cox, and get a wee tutorial on how to handle this mouthful of vowels and consonants. (“Bruichladdich”, after all, is pronounced “Broo-ik-loddy”, so American English is ill equipped to handle Scottish) I had been trying to make it “aw-KIN-tuh-shan” and “aw-CHIN-to-shan“. Cox set my lame hillbilly ass straight: “Awkun-TOE-shun“. 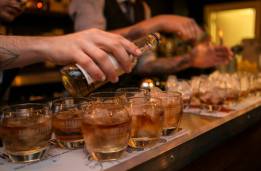 The Beer Cocktail – Ruin or Revelation? You be the judge…

Confession time: this box of whiskey was also sent with a six-pack of mixed beers in it. It was a wild selection, featuring Lagunitas and Sierra Nevada, among others. All of them were great beers that I would gladly drink…and did. But the thrust of the box was for me to try the beer cocktail recipes they included and, in that, I found it a Major Fail. I’m very much on the fence about cocktails, in general, and beer cocktails, specifically. I suspect that someone MAY, just MAY, invent a beer cocktail that actually makes some sense as either a beer or a cocktail but I haven’t tasted it yet. The problem is hops. Hops and the concept of “cocktail” are at war and nobody yet has negotiated a cease-fire. Hops are BITTER. Cocktails, for the most part, are sweet. Maybe using a very sweet beer – say Ommegang Chocolate Indulgence or Southern Tier Creme Brûlée or Delirium Noel – with a mixer would be…interesting. It would also be a tragic waste of a great beer. Do we really need beer cocktails? Not that I’m expecting that I’m going to influence anyone with that statement. People will try to make cocktails out of lawn trimmings and auto parts, so why should beer be spared that indignity? Suffice it to say, in this instance, that I cannot write reviews of those cocktails as laid out in the box because I never write negative reviews in The Pour Fool of anything but Budweiser, AB/InBev, and the ho-boys who sell out to same.

But those whiskeys…There were two of ’em: Auchentoshan “American Oak” and Auchentoshan “Three Wood”…Holy Cats!…I admit to never having tasted either of ’em. The last Auchentoshans I sampled were the 12, 18, and 21 Year Olds and their cask strength “Valinch”. I remain a HUGE fan of all four. Yeah, they’re not my beloved Islay or Highland Scotches but, God, do they have grip! They caress your tongue, firmly and with Intent; bathe it, twist it a tad, and liiiiiinger on that lazy finish. No, they obviously do not have the same universal popularity of Glenfiddich and Glenlivet and Macallan but they have that soul, that clarity of expression that I find in Laproaig and Bruichladdich and Usquaebach and Oban and that I look for in every whiskey I try. I don’t think a whiskey can ever be considered truly great unless, in amongst the very sensual pleasure of the flavors and aromas and that pleasant burn in its aftermath, there is a tiny smidgen of sadness. For those not as romantic about great whiskeys as I am, that will make no sense. But some of you, having tasted and known great whiskeys at a near-molecular level, are reading this and nodding and whispering, “Yes…”

“Three Wood” is the brawny Big Brother of the two. Aged first in American Bourbon barrels, then moved into Spanish Oloroso Sherry casks, and finally into Andalusian Pedro Ximenez Sherry barrels, Three Wood is a dark amber in the glass and deliciously aromatic in the same way that a great Sherry will always be. Unlike the Sherry, though, Three Wood’s aromas are explosive, forward, vibrant and active…and dead-on suggestive of the flavors to come. The aromas are warm currant jam, orange and tangerine peel, brandied raisins, caramelized brown sugar, hot toffee, and whole-grain toast. Those follow onto the palate, graced by cocoa and candied violets. The burn is moderate and pleasant and the finish slowly develops a sorta meaty character that’s suggestive of browned poultry or roasted cashews. It’s one of the most consistently surprising whiskeys that I’ve ever come across. I always expect something different on my tongue from what shows up and it’s fascinating in its chameleon-like transformation when chilled. Just a remarkable whiskey. 98 points

“American Oak” is a whiskey 100% aged in American Bourbon barrels and is the younger, lighter, more fun-loving alternative to the sexy soul music of Three Wood. The flavor profile bristles with bright, edgy coconut and citrus fruit peels. There is, naturally, a big vanilla presence, as there will always be in Bourbon-soaked oak, and then layers of Asian pears, white peaches, baked apples, white pepper, nutmeg, and bitter herbs behind it. It’s noticeably lighter, in color and texture, than Three Wood but a bit more complex and a lot more approachable for Single Malt newbies. There is a cocktail recipe actually linked to the page on Auchentoshan’s website and it sounded so good that I tried it, even though I approach mixing Scotch with anything as I approach a rattlesnake. For those inclined to cocktails, here it is:

Served in a High Ball glass over cubed ice.

This is GOOD. Scrumptious. Refreshing. And is going to be a jaw-dropping addition to your Holiday cocktail roster. FYI, the “pressed apple” is pureed apples – not applesauce, which is loaded with sugar. Peel and core an apple and buzz it in your food processor until smooth. And, the “1 wedge of lime, SQEEZED” was, yes, without its “u” on the website. Must be a Scottish thing…

“American Oak” gets a 94 from me and, given the score for Three Wood, that may seem like damning with faint praise but it is absolutely not. As time has gone by and I’ve lived with these two gems, I’ve found myself gravitating to the American Oak more and more. It has that brilliant freshness and brightness that is almost the antithesis of the whiskeys I normally celebrate. Like its spiritual cousin, Suntory “Toki”, American Wood bears up to repeated tastings as well as any whiskey I know. It never wears out its welcome and always delivers…something I can say about every Auchtenoshan whiskey I’ve ever tasted. 94 Points

Awken-TOE-shun…Auchentoshan. Next time you’re looking at Scotches, get out of the freakin’ box! There are a ton of thrills to be had in exploring those misted hills of Scotland and the very soul of those wild-ass, maniac Scots is there in every bottle. If you just drink Scotland’s Greatest Hits – the Johnny Walkers and Chivas and Dewar’s and Glenlivet – you’ll enjoy yourself, every time. But trying some of these Dark Horses is a wild ride across the moors without a saddle and offers a new adventure in every bottle.