Donald Trump is hiding something…and he’s doing it in the dumbest way possible, challenging American traditions of honesty and transparency and accountability and brazenly lying about it, in the face of mounting evidence and staggering skepticism. This is just my opinion, of course, and should be taken at its face value, which is that of yet another face in the Cheap Seats, but I would lay every dollar I’ve made in my entire life on its basis in reality.

Here’s what I believe and why: 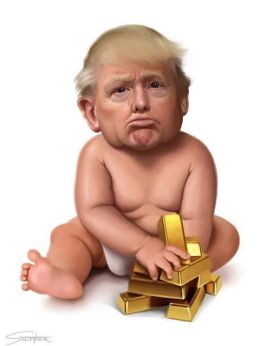 The one and only generalization that we can make about this person who now occupies the nation’s highest office is that he’s totally and utterly predictable as to his version of Truth. If he’s wrong, he’ll never admit it…because, in his mind and in his life, Donald Trump has never really had anybody that he simply could not ignore or ridicule or fire stand up to him and tell him he’s wrong and that he has to own it. He started as the silver-spoon child of a wealthy NYC slumlord and became accustomed to thinking of the world as Us versus Them and “Them” was going to lose all battles. He grew to adulthood and used his inheritance and his dad’s businesses to remake his image with the New York elite who had always rejected him, relentlessly promoting his “brand” with ostentatious show of his fortune that he never realized was what the Manhattan Upper Crust disliked about him, in the first place.

His conspicuous, gaudy displays of his wealth are, by now, his most visible attribute. The garish excess of his apartment in Trump Tower, his private airplanes, his serial business start-ups that he persists in saying were actually successes…all these things have been freely and avid promoted as proof of Trump’s greatness and he has ridden that public image of wealth and success to a TV show and speaking engagements and now to a highly suspect “presidency”, which is rapidly turning into a circus as staged by six four-year-olds, hyped up on cough syrup.

There is no boast, no claim, no reinterpretation of facts that he will not use to make himself look good; to “win’, which is really what drives him:

“I think the only difference between me and the other candidates is that I’m more honest and my women are more beautiful.”…

“You know, it really doesn’t matter what the media write as long as you’ve got a young, and beautiful, piece of ass.”…

“We are going to have an unbelievable, perhaps record-setting turnout for the inauguration, and there will be plenty of movie and entertainment stars. All the dress shops are sold out in Washington. It’s hard to find a great dress for this inauguration.”

The ONLY part of Donald Trump’s freak-show of a life that has been at all secretive is his finances and those he guards more jealously than the CIA guards its operatives list. Everything in Donald Trump’s world is almost desperately and aggressively on display, just as long as it’s something that is or can be spun as a positive bragging point and as long as those seeing it are willing to genuflect before his brilliance. Except his financials.

It takes a certain kind of vivid imagination to think that, if Trump’s finances were so robust and outstanding and would make him look credible, that he would not run to wherever he keeps them, slam the vault door, run down the street waving them at passersby, slap ’em down onto a Congressional Ethics Committee’s conference table – and on Fox News that same evening – and shout, “Take a look at THIS, bitches! Look at those numbers, baby! You dared to doubt Donald J. Trump? Well, you idiots can kiss my ass!” And on Fox, he’d stick his spray-tanned, simian mug into a camera and chortle,”Gotcha, clown-boys! You said I was broke? SCREW YOU! I’m president for LIFE, jagoffs! Now back your lame asses UP and get out of my way!”

If his finances were that stupendously good, Trump, by ALL available evidence, would be flaunting them before every camera pointed in his general direction. He’d probably have them tattooed on his butt and drop trou’ on CBS Evening News and give all his followers a titanic collective woody. There is nothing in his entire life that suggests that anything Donald Trump has done that will shore up his shaky self-image has been done in secret, without maximum milking of its potential benefit as an ego-boost. 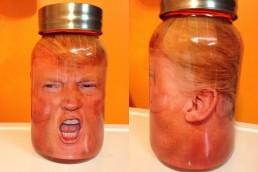 YOU can buy this on the marvelous etsy! Cheap AND creepy. What could be better? (Click photo for link)

It’s been widely speculated that his personal worth stands at $1 Billion, $10 Million, less than a million, or dead broke and in fact, deeply in debt. Absent any real proof either way, everyone can make up their own story but we do know that he’s bankrupted at least four major business ventures, has missed hundreds of payments to contractors and vendors in his existing businesses, and has been stonewalling both the public and government auditors fanatically to avoid releasing anything about his financial status. Most of his appeal, to the masses of reactionary voters who form his core base, is based on that 1950’s-vintage belief that rich guys are presumptively smarter and better than you and me. His entire public image is not based on his record in politics or public service. He has none of either. It’s not based on any sort of talent. In that respect, he’s just another Khardashian: Famous because he’s famous. It’s not based on any cultural, educational, religious, scientific, ar artistic acumen. He has none of those, either. Donald Trump has been very carefully and relentlessly promoted as someone who is famous for being rich. Period. “Rich” is Trump’s ONLY claim to fame. He’s not handsome or smart or telegenic or well-spoken, muttering his way, in his fruity NYC accent, through countless photo-ops and interviews in which the sum total of what he did was promote the idea that Donald Trump is great and we should all kiss his ring…or some fatty body part.

Donald Trump is hiding something. And in this life in which everything that promotes the man and myth that is The Trump Empire has been not only freely given but, in fact, shoved into our cultural face, it is totally out of character to think that a shock ‘n’ awe financial picture which would bolster the Trump name and cement him as a presumptive candidate for a second term in 2020 wouldn’t be made public.

Donald Trump is hiding something. We don’t know what it is…but the man who authored the immortal (and immoral) phrases, “Grab ’em by the pu**y!” and “My fingers are long and beautiful, as, it has been well documented, are various other parts of my body“, is not going to suddenly develop the yips about releasing information which would make him look great. You don’t strut the American stage as relentlessly and fanatically as Trump has done for forty years and suddenly start doing a Mother Teresa impression unless something is seriously out of bounds.