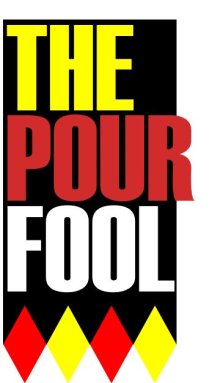 We’ve all seen this before:

There was an old car joke, from my high school days: “Why do you call a Pontiac GTO an ‘asshole’? Because everybody has one. ”

Same deal here. Everybody has one of these wood-aged assholes and, many times, they really don’t taste much different from their racy analog. When you get hold of a great one, you know it, instantly…I do, anyway. And the great ones tend to come from great brewers. The “Blind Pig Finds Acorn” principle almost doesn’t apply, here. Making a beer like Deschutes “The Abyss”, admittedly my favorite liquid of any type that I’ve ever tasted, is a ridiculous juggling act, more akin to those guys who keep 35 plates spinning atop sticks than brewing fermented liquids. Even Deschutes, with its encyclopedic communal grasp of All Things Beer, has screwed the pooch, now and again. They once had to dump the entire production of one of their Mammoth Darks because the chocolate infusion didn’t melt properly and clotted on the surface like congealed fat in a drain pipe. I actually had a young brewer, a few years back, say to me, “What’s the big deal about making a Stout? You throw a ton of shit in the kettle and don’t filter. It’s like making any other beer.”

…but it really helps.

That young man, I’m happy to say, is now running his family’s business, which is mercifully not making beer.

Larry Sidor, I’m delighted to say, IS making beer, still, and – despite already being undeniably one of the Top Five brewers in America – is even getting better at it.

For those who don’t know, Larry Sidor was the brewmaster at Deschutes for the eight years that really cemented the Bend behemoth as one of America’s best brewers. Larry was largely responsible for developing The Abyss and I would be doing this ring-kissing act for that, if he never did anything else. And when he created The Abyss – with a LOT of help from his assistant brewers! – those assholes were not yet assholes. They were, in fact, unicorns; rarities, beers that sparked imaginations all across America and inspired young brewers with considerably lesser chops than the Larrys and Wambleses and Greg Halls/Seth Grosses and Brian Dunnses to start “toss(ing) a ton of shit into the tank and don’t filter“. So, in one sense, those aforementioned pioneers begat the assholes…in ONE sense. In the only sense that matters, they rejected those misguided efforts by the simplest means possible: they made great beers.

Five years ago, Larry left Deschutes to start a brewery dedicated to barrel-aged and experimental beers that don’t fit into Deschutes’ jam-packed brewing capacity. He moved two miles down the road, into a converted mechanical contracting shop, and opened Crux Fermentation Project, with partners Dave Wilson and Paul Evers. Wilson and Evers have since moved on…The Larry Dude Abides… 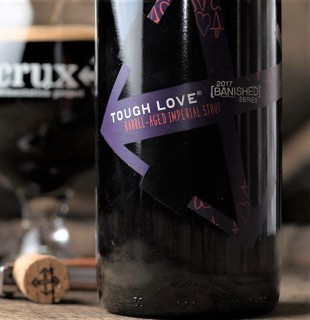 I’m going to admit two things here: I have been a passionate advocate for Crux, since Day One. And, when Tough Love, the big Crux Imperial Stout, was first introduced…I liked it but didn’t love it. I don’t know if it would have even made my Top Ten of favorite Crux beers, in that first iteration. Ditto for the next two iterations: better each time but nowhere in the same zip code as The Abyss or even Bend’s other great Stout, Boneyard Brewing’s massive Shug Knite. I knew damned well that Larry Sidor, of all the brewers currently not covered by dirt and daisies, was capable of making a Stout that could stand toe to toe with The Abyss but did he, in fact, even see that as a goal? I never inquired. Maybe The Abyss wasn’t among his favorite beers. I never asked him about it. Maybe he just made it because Gary Fish asked him to. I realize that it was possible that he might not like huge, black-hole-ish Stouts, even though I have no idea how that could be. But I waited and wondered, drank a fair amount of Tough Love, anyway, because it’s GOOD, and hoped…

(Note:  For all those people who believe that I am bosom buddies with people at Crux and Deschutes and those other great Bend breweries, let me make this clear: I have talked with Larry Sidor ONCE, in my life, at the Crux grand opening party, and that was for maybe fifteen seconds. I don’t personally know anybody at Deschutes and have met Gary Fish once, when judging a Deschutes food event in Portland. I have never met current Deschutes brewmaster, Veronica Vega, and wouldn’t recognize her if I tripped over her. I try, fairly hard, not to become pals with brewers because I don’t want to have to question my own objectivity.)

Five days ago, a package arrived on my doorstep, with the word “Crux” on it. Inside was a 750ML (the size of a wine bottle, FYI), with a label saying, “Tough Love 2017 [Banished] Series Barrel-Aged Imperial Stout“. The back label expanded, “After being Banished to Kentucky Bourbon barrels under controlled conditions for nearly a year, rich overtones of dark roasted malt, oak-smoked wheat, and malted rye give way to delicate notes of velvety chocolate, vanilla, and dried cherries.” Lotsa verbiage, quite the mouthful…

…little did I know.

It’s like this: Crux 2017 [Banished] Series Tough Love is the ONLY American-style Imperial Stout that I have EVER tasted that equals The Abyss…which is a statement that, frankly, I never envisioned myself being able to honestly make. Yeah, yeah, I get emails and comments all the time, “How can you claim The Abyss is the best Stout made in the US? _______________ is a LOT better! And so is ____________!” My answer is always the same: “Despite what you said, I have tasted ___________ and  __________ and, in my opinion, neither stacks up to The Abyss.” I may not have tasted all the Imperial Stouts made in the US. I doubt anybody has. But, for going on eleven years and over 150 big Stouts, I have tasted no two that were even equal to The Abyss…and the 2017 iteration of Tough Love [Banished]. 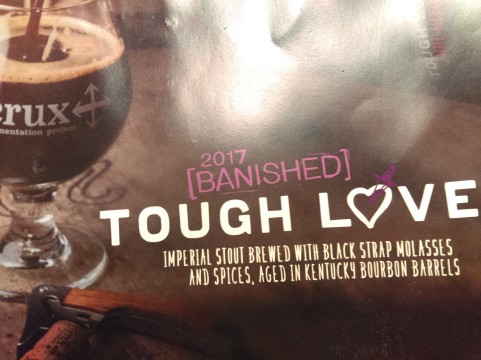 The only additive Crux is copping to in this year’s TL is blackstrap molasses. There is a vague mention of “spices“, which could be anything from cinnamon and nutmeg to sumac, kokum, asafoetida, or wattleseed. (We’re just gonna assume they didn’t use those last four) And, of course, the use of “Kentucky Bourbon Barrels“, which one sip would tell you, anyway. What sets this ale and The Abyss apart is Larry’s very rational but extremely rare approach: layering. Yeah, yeah, for Northwesties, we are now picturing Eddie Vedder and his long johns, cut-off jeans, and three strata of plain flannel. And the idea is much the same, albeit a lot better smelling. In Larry World, one does not simply “toss shit into the tank“. He painstakingly measures out the grains and tweaks the infusions and gets a little obsessive about the hops and it Works…Boy, does it work! This is an Arrangement of flavors, a little symphony in a bottle; the polar opposite of tossing shit into a tank to produce yet another tepid asshole Stout. The proof is right there in one one-ounce sip: flavors fan out across your palate, evolve, move out of the background and rearrange themselves as this viscous miracle crosses the tongue. I lost count of all the emerging grace notes after finding ten or twelve and, on repeated sips, even more developed; “developed” in exactly the same way a Polaroid photo develops. Colors swell and notes state their presence. It’s staggering. And that overlay that anoints the whole – that wicked, sinful, hedonistic, languorous Presence of Bourbon that rises and swells like the bass notes of a massive pipe organ – made me go a tad goofy around the edges for whole minutes before picking my jaw up off the floor and coming to grips with one of those Moments when the earth tilts on its axis and everything looks and feels different. 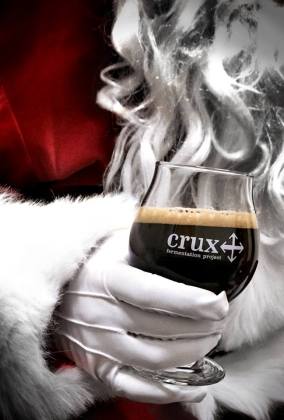 It’s that moment when, as Brother Dom Perignon is alleged (probably falsely) to have said, “Come quickly, Brothers, I am drinking the stars!” If he had said that, I know how it would have felt. I had a similar moment at Deschutes Bond Street Pub, back in 2009, when I got a small glass of the 2007 Abyss and became a little breathless as I took that first sip. I had another when tasting the Argiolas “Turriga” 2005, at Ristorante Paradiso, in Kirkland, Washington, back in 2011. Another, back in 1971, at Oban distillery in Scotland, when I first “got” single-malt Scotch and another upon my first taste of Laphroaig “Lore”, just two years ago. I taste a LOT more liquids than most people, so I have this revelation more often, but few of those Moments have surpassed the night of November 16th, when I opened and tasted Tough Love 2017.

This instantly becomes, IMO, one of the best Stouts made anywhere on this planet. I have a fairly long list of great Stouts, many of which you’ve heard of and some which you probably have not. River North Brewing (Denver) “Avarice”? Counterbalance Brewing (Seattle) “Kushetka”? Walking Man Brewing Black Cherry Stout, easily the best fruited dark ale I’ve ever found? One that’s being released just this month, from my homies right here in Tacoma, Harmon Brewing: the massive, whiskey-barreled Russian Imperial monster called “Vladivostok”. Then there’s Hunahpu’s, Parabola, Dark Lord, Abraxas, Cavatica, Big Bad Baptist, Black Tuesday, Yeti, Super Nebula, pFriem Bourbon Barrel Imperial Stout, and about two dozen more.

America is getting seriously good at Stout, even here in Washington. We were, until fairly recently, quite a bit behind the curve. But nobody in America has yet equaled what Larry Sidor has now done twice (!). Crux Fermentation Project Tough Love [Banished] 2017 is as good as it gets in American Imperial Stout. If you are not afraid of the dark, as the old commercial said, you’re going to want to find this stunning gem and jump into the Deep End.   100 Points

One thought on “Crux “Tough Love” 2017 [Banished] Edition: The Ultimate Refutation of the Asshole Stout”