I started a far longer version of this post and went back and read it…and scrapped the whole thing. It was all good information but just didn’t need to be here. This post has a definite Bottom Line and that line, as it happens, lies directly along the boundary of where the concept of “Pale Ale” stops and “IPA” begins. And the beer being reviewed should, if there is any objectivity involved in the process, help write the new textbook for what the elusive idea of “Northwest Pale Ale” will come to be.

Crux Fermentation Project‘s new “Play Wave” NWPA is…Perfect. It just is. Wanna know what I mean by that? TASTE IT and then THINK about what this emerging style of beer means to you.

“Pale Ale” is an ale that is PALE in color, shows less hops bitterness than an IPA, and is lighter bodied on the tongue. The idea is not complicated and the wonderful thing about the style is the same exact thing that is its drawback: there is infinite room for interpretation.

Color: Several of the Pales that I’ve raved about in the past are just really, by no known definition, pale. The leader in the NWPA clubhouse has been, ever since its debut in 2010, Deschutes stunning, world-class “Red Chair”. It’s a spectacular beer. But it is NOT “pale”. There’s the glass, to your left. Is that pale? Hell. No. That’s copper or amber or something like that. But the flavor! The intensity is off the charts, the complexity is breath-taking. It’s a GREAT bottle o’ beer. But it comes up constantly in these raging debates about “Is that a Pale or an IPA?” Tasted blindfolded, I might well guess IPA. Looking at it, I’d say Red Ale. But Deschutes calls it an NWPA. And they have every right to. 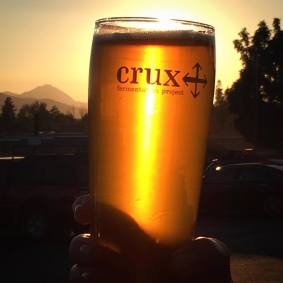 Hops:  Fort George “Sunrise” OPA and Bale Breaker “Field 41” are two Pales I drink a lot. But both are often classed by craft beer “purists” as IPAs. And, again, if I didn’t see the labels, that’s what I would think they are. I LOVE both but…they’re probably, really, when all’s said and done, IPAs…and not mild and unassertive ones, either.

A luminous, inviting, light golden color in the glass. It should look refreshing, cooling, juicy.

It should have something going on besides resins and bitterness. It should show some subtle malts, a bready, crackery yeast character, and hops presence that emphasizes the other vivid, complex flavors that hops express: Citrus and florals and spices and stone fruit and apples and melons. But it HAS TO at least finish with some degree of bitterness. It’s NWPA, remember. Bitterness is one of our cultural touchstones. We LOVE us some resins. And nothing can be called an NWPA without that Edge.

It should avoid any hint of ponderous weight or flabbiness. This is a beer about refreshment. It is not an art piece. It’s for drinking and enjoying and lather, rinse, repeat. Repeat a LOT. It should carpet bomb your palate with – pardon me – kick-ass flavors but do it gently; a caress rather than a slap. Full-frontal assault is fine for Strong ales and IIPAs and Barleywines but not in your Pale.

ALL of this is there in every sip of Play Wave. This is the beer that you will be drinking this summer, if I and Crux can manage to get it into your munching cave just once. It is…undeniable. My method of tasting – beer, wine, and spirits, for forty+ years now – is clear my mind for the first sip, think nothing as I taste it, get that overall impression, and then start looking for Problems…and MOST beverages have some. GREAT beverages do NOT. Red Chair doesn’t. Maine Beer Company “Mo” doesn’t. Ninkasi “Tricerahops” doesn’t. Fort George “The Optimist” doesn’t. Tired Hands “The Light That Spills Out of The Hole In Your Head” doesn’t. Westbrook “One Claw” doesn’t…And Crux “Play Wave, well…

As my wife said, “There is just NOTHING wrong with Play Wave.”

This is NOT a “better beer” than Red Chair. They are the two poles of the idea of the NWPA. They are both within the continuum of what the style is coming to be. But NOBODY is EVER going to mistake Play Wave for an IPA or for an Amber/Red. In my mind, Play Wave is the PERFECT expression of this beer style. Call in the fire and piss on the dogs (I may have that backwards), the Hunt is Over. This is and should be the template for making the Northwest Pale Ale, from this day forward, power, glory, yadda-yadda, Amen. Is there room for a bit more hops presence, a tad more bitterness? Sure. There is room for any other interpretation and I suspect that devout HopHeads won’t like this ale as much as I do but I guarantee they won’t bitch about it, not if they have any appreciation for a finely-crafted, balanced, elegantly-made beer.

Oh, and did I mention that this is just a dead-bang, flat-out, insanely delicious beer? If not…shame on me.

With Play Wave, Larry Sidor and Cam O’Connor have finally done something that I and probably a lot of people, never thought could be done: they’ve invented an ale that is arguably better – or, at very least, on an absolute par with – Deschutes’ Twin Monoliths of Mirror Pond Pale Ale and Red Chair NWPA. The ONLY thing that will stop this brilliant ale from becoming a flat-out American beer Icon is availability and timing. It’s being released to relatively little fanfare. That should change, as more and more people find out about it. This is the defining classic Northwest Pale Ale and one that is so brilliantly approachable and drinkable that even your Mass-Produced-Pilsner-Addicted pals will find nothing to bitch about. And a LOT to love. We’re watching the birth, here, of one of those miracle beers – like Mirror Pond and Mac & Jack’s African Amber and Sierra Nevada Pale Ale and New Belgium Fat Tire – that helps define an era in brewing and you skip this at the peril of your craft beer cred…and your taste buds.  100+ Points