I’m going to do something, here, that I almost never do: I’m going to use a press release to set the scene about a new product and I’m doing it because of two things: 1) I’m lazy white trash, and 2) I’m up against making Thanksgiving dinner and anything I can do to save :30, right now, I’m latching onto like the last helicopter out of Saigon: 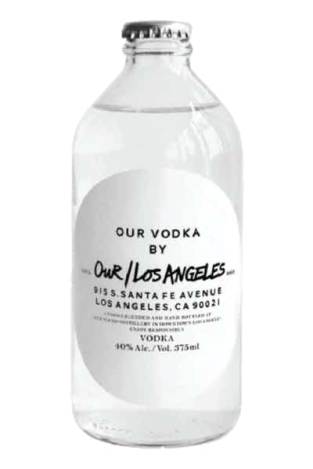 “The Our/Vodka brand includes cities: Our/Berlin, Our/London, Our/Detroit, Our/New York, Our/Los Angeles and coming soon, Our/Miami. The parent company, Pernod Ricard, partners with local entrepreneurs who love and know their city to run each local brand.  OUR/Los Angeles is led by creative entrepreneurs Anton van der Woude and Rupert Runewitsch…Our/Los Angeles is a vodka brand and distillery in the arts district of downtown Los Angeles. Our/Los Angeles is partly-distilled, blended and hand-bottled in the micro-distillery according to the same global recipe, but with the use of different ingredients sourced as locally as possible without compromising on quality, giving each vodka its own, unique flavor profile. The small-sized, simple bottle is sealed with a crown-cap containing a vodka that is smooth, fresh and pure with a slight grain and fruity note.”

Now, it’s entirely possible that the folks who sent me this stuff for review won’t appreciate some of this. Such as… 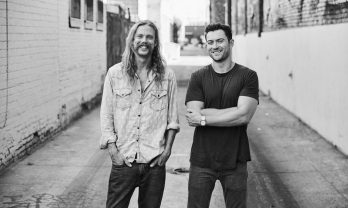 “The brand is furthering their ties with the city by launching the Our/Los Angeles podcast and zine which features interviews with tastemakers, artists, entrepreneurs, activists and more who represent the culture of Los Angeles…’We believe there are so many unique things about Los Angeles and consider the podcast and zine an extension of our brand. Locals and visitors alike can get the full Los Angeles experience in tasting our vodka and immersing themselves in the culture of the city. They can sip locally, listen locally and read locally. It’s full circle,’ said Rupert Runewitsch.”

LA lifestyle fetishes. Immersing oneself in the culture of LA is groovy, if you happen to live in LA or care deeply about it but what if you don’t? What if, like millions of people in the rest of civilization, you see LA as just a city on the West Coast of North America. People in LA are probably pressing cold cloths to their foreheads and marking me for extermination, reading this, but yes, Joe and Jill LA, there are far more people who are not immersed in the culture of LA that those who are…and we drink Vodka, too.

Here is the crux of the matter of Our/LosAngeles Vodka, the ONLY fact that has any real meaning at all, when you strip away the artifice:

This is a STUNNING, clean, subtle, nuanced, crazy-fine Vodka. A genuine KILLER bottle of clear spirits. From LA, of all places. And, of course, from a buncha other places, too… 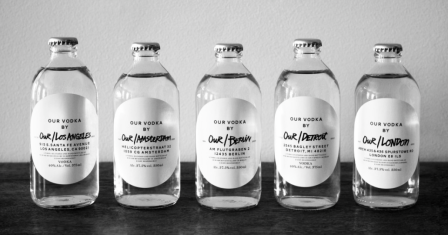 Their PR material seems to take a furtive peek around, to make sure nobody is overhearing it, before disclosing that OUR is made using “a Non-GMO strain of yeast that is traditionally used in winemaking“. I am probably not the only one to have noted this but using wine yeasts to make booze is not exactly a new Thang. Here in Washington state, where millions of gallons of wine is made annually (as opposed to LA, where almost no fermented grape juice is produced), using wine yeasts and even culturing your own yeasts from the skins of wine grapes has been done rather a lot. I have a bottle in my fridge from a WA state artisan distiller who used a Wyeast 4767 Dry/Fortified strain for his molasses-based Vodka and it’s SO good that I’m hoarding it, drinking maybe an ounce a month, straight, from the freezer. OUR materials don’t specify a strain, so I can’t extrapolate on it but whichever they used, it produced something that sets itself clearly apart from about 98% of all the traditional Vodkas that I taste in an average year. 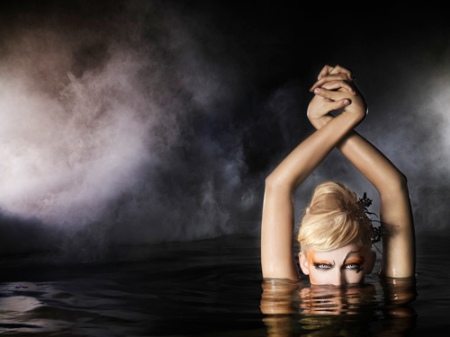 This MAY be what the phrase “immersing themselves in the culture of the city” means. I dunno.

Our/Los Angeles Vodka is just stunning and it is that in a way that is not going to shake the very ground we drink on and scream its name from the rooftops. Unlike its parent city, this is a subtle, elegant bottle o’ booze; an achingly clean, crisp, mixable, sippable 375ML jug of objective excellence. Unlike those matters of taste that we all take as articles of faith as absolutely peculiar to each individual, traditional (read: uninfused) Vodka can easily be approached objectively. Does it exhibit off-flavors? Is it smooth and drinkable in the mouth? Does it show anything cloying or unpleasant on the finish? Does it taste like its constituent grains or is it Traditional-Crappy, like Seagrams and Smirnoff, which have no taste at all, by design?

OUR is made from organic wheat, weighs in at a workable 80 Proof (40% ABV), and distinctly shows lovely, peppery, vanilla-tinged grain character, balanced nicely against pretty, yeast-driven tree fruit, floral, and citrus notes. It’s damnably smooth, shows a modest, flattering burn, and finishes with a mild, fervently pleasurable overtone of something like Teaberry gum. I’ve rarely chilled and sipped a Vodka that so over-delivers on the Vodka Valhalla promises of Clean, Brisk, Smooth, and Elegant. And this stuff does. By the truckload. 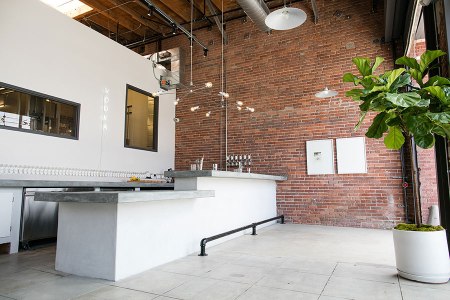 Not in LA or a fan of The City of The Angels? Don’t want to be “immersed”? No problem. Just buy a bottle of this stuff, produced in part by Pernod Ricard, which means it’s solidly well-financed and likely to be available, uh, everywhere. It comes in – hang onto something! – a 375ML(!), snap-capped(!!), uber-convenient, easily portable bottle! WHY nobody has packaged like this before is beyond me. You’ll probably want to chill it a bit before you start dumping in all sorts of additives, ALL of which will find OUR as amenable a dance partner as any booze ever distilled. TRY a bit first, all by its lonesome, and just marvel, as I have, at what these folks in LA’s “Art District” (whatever that is) have crafted. Our/Los Angeles is SERIOUSLY great Vodka, even if you don’t add LA into the equation.