“Flagship February #5: A Wake in a Bottle” refers to a brewery that even some Northwest beer fans are unaware of because it is guilty of the heinous sin of Not Being In Seattle… 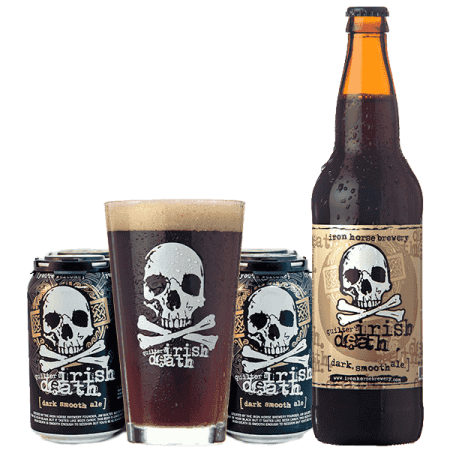 Iron Horse Brewery, located in painfully windy Ellensburg, Washington, brews what is arguably (it keeps winning STATE-WIDE crowd-sourced “best of” contests, pretty much every year) the most undefinable, odd, compelling beer made in the Pacific Northwest. Rivaled only by Sound Brewery’s “Monk’s Indiscretion” for inspired eccentricity, Iron Horse “Quilter’s Irish Death” chuckles – darkly – at the whole idea of “category”. Is it a Stout? Nope, although it may be a bit Stout-ISH. Is it a Wee Heavy. Getting colder? Is it an Irish Dry Stout? Again, NO. It’s a tad lighter in weight and texture than any of those but at 7.8% ABV, it’ll work just fine as a Winter Warmer. So…is it one? NO.

Answer: I dunno. What I can tell you is that it’s a lovely mahogany brown in the glass, makes a full, creamy head, delivers up coffee and cocoa and a touch of molasses and black currants and toast and vanilla and….Whew! Greg Parker, Iron Horse Head Honcho, a man as blunt as a boxing glove and inventor of QID, calls it “a dark, smooth ale” or “beer candy“, depending on how inspired he’s feeling. Those work just fine.

I’ve consumed a small lake of this stuff, over the twelve-ish years since it debuted and it wears about as well as any NW ale I’ve ever found. NO, it is NOT a hop bomb. In fact, if someone was rushed to the emergency room with Hops Overdose, this could well be the triage treatment. It WILL make you remember, vividly, why you ever loved malts, to begin with. (The 28 IBU is just enough to balance out that sheer tonnage of its SIX constituent malts and keep it from being too frankly sweet.) This is absolutely Iron Horse’s flagship beer and just as absolutely the flagship for the entire Eastern 3/4 of Washington state, just across the mountains from Seattle. Just a f@#$ing BEAUTIFUL ale.