So…back during the late summer, I got an, uh, enigmatic cardboard box from something called “Skeptic Curious Spirits”, (aka Skeptic Distillery) in Chicago. No clue. But my first thought was, “Hmmm, somebody actually paid attention when I said I like weird stuff.” Most PR firms and even a LOT of distilleries don’t like weird stuff. Harder to sell. Right nearly impossible to come up with something truly original. So, most don’t try. And the “curious” part had me a tad…well, skeptical.

I looked them up online; saw that they make a botanical gin. Okay, I thought, now we’re talkin’!”

Then we suddenly quit talkin’.

Inside the box was a handsome, big bottle of something called Skeptic Curious Spirits “Ginquila”. Again: no clue. I read on: “…we infused a gin base with fresh tropical fruit and spices including papaya, grapefruit, orange, lime, cinnamon, thyme, and Chipotle and Arbol peppers. But why stop there? Just to make sure this spirit is like nothing you’ve ever seen, we finished it in Tequila Barrels for a few months!“

Well…fuck me. Infused Gin aged in tequila barrels. What a fuggen waste of good Gin and good barrels. If I want a cocktail – which I do not – I’ll make one. It’s not brain surgery. My cousin makes cocktails and he needs a user’s manual to figure out a ballpoint pen.

But, the folks were nice enough to send it, so I cracked the seal and poured a small shot. No ice, no mixers, no screwing around. Same test for everything: if you can’t drink it alone, I’m not interested. I expected something icky sweet and tasting like one of those God-awful nasty concoctions I tried at my step-son’s wedding in Cabo.

And then I tasted it.

Ginquila, despite the screwy description and heinous idea, was absolutely Dee-damned-lightful. It is NOT sweet at all. It hits the palate with a complex wash of suggestions of fruits and an assertive overlay of those bell-pepperish barrels; a fresh and slightly herbal and sorta exotic blend of flavors that makes no sense at all to describe but somehow, impossibly, just Works in the mouth. It’s even, dare I say it, subtle, even elegant, in a pervy sort of way, as if Mozart had decided to try his hand at writing atonal jazz. It was kinda, well, all over the place but in the best possible sense. It was fascinating and stayed fascinating the longer it was on my tongue. It was even a legit Reposado, in character.

Upon reflection, as a matter of fact, when you’re making/drinking a botanical Gin, you could easily engineer something close to this with some smart infusions and dickheads like me wouldn’t sneer at you for being gimmicky. Owner/distiller Karl Loepke was sensible enough to realize that the most direct route to this Gin was to just tequila-barrel it…which explains why he’s making waves in the liquor biz and I’m typing in my Big Lebowski pajamas at 9 a.m. It was something of an aesthetic spankin’, for me: do not judge a book by its cover…or a Gin by its marketing blurb. 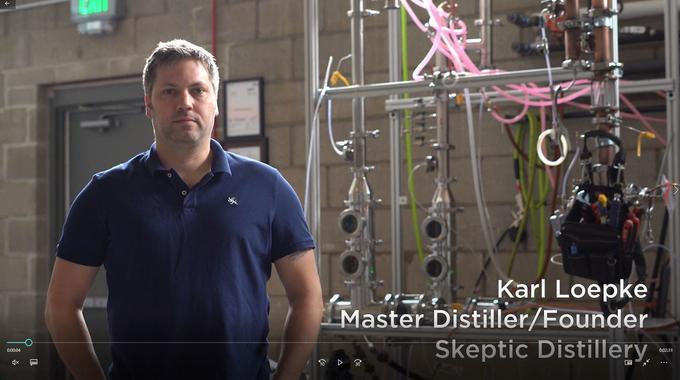 I haven’t tried anything else from Skeptic Curious Spirits but I have hope. This stuff, dare I say it, is one of those yank-ya-sideways kind of experiences that can work as a cocktail blender for post-teens seeking to git stupid and equally well as something that stuffy, crabby old jackasses like me can sit and dissect and admire for its startling ingenuity and skill. And as a gift idea for your booze-wonk pal who’s always yammering about Vietnamese liqueurs with lizards in the bottle, this is one that will tickle his eccentric antennae and let you wrap and send it without hurling into your dried gourd holiday table centerpiece.

A fairly non-deep dive into the origins of Skeptic reveals a young man with a homebrewing habit and a, uh, skeptical wife. Old story, eh? Founder Karl Loepke custom-built Skeptic’s two vacuum distillation systems. One is used to make their award-winning (according to their website) gin and vodka, and one is used to convert beer into whiskey. (That yet to come) Even the story of how the distillery came to be is a twisted, near-Byzantine tale and I won’t go into it here. However this stuff got here, at very least their Ginquila is a flat-damned – if rather shocking – success and bodes VERY well for whatever it is I taste next from this band of persistent, ingenious skeptics.

Ginquila is going to run ya somewhere between $30 and $35. WORTH IT.