I almost hate to pass this along, mainly because the research that formed the conclusions at least appears to be selectively done and in either inadvertent or literal service to the agendae of the Fizzy Yellow Mega-Brewers, but it’s so absurd that, once I got past my initial hot flash of incredulity and outrage…I laughed about it for nearly an hour…

I received a press release from The Zeno Group, a very reputable PT firm with offices, literally, all over creation, in service of their client, TiVo, relaying the results of a survey that studied the drinking habits of late-night television junkies. Their conclusions were, to put it very mildly, mind-numbing. Apparently, the hours occupied by late-night TV viewing are the prime hours for the average American to reach into the fridge and find that none of their good beers have survived the evening with friends or the couples tag-team attempt to forget the horrors of the day’s work. According to TiVo’s study, late-night TV watchers come in only three species: 1) Mouth-breathing throwbacks who have never heard of the craft beer revolution and continue to mindlessly swill whatever tainted dishwater the corporate megabrewers heaped the highest and cheapest at their local discount supermarket, or 2) The aforementioned craft fan who ransacks the refrigerated relics of their pre-craft existence in a desperate search for any ol’ grain-based beverage, or 3) Hipsters who reflexively chug PBR with what they erroneously think is ironic intent, while actually, secretly loving every second of PBR’s uber-sweet, wince-inducing character, and wouldn’t really dream of drinking anything else. The fact that the can could just as well be empty never dawns on hipster Blue Ribbon-sippers because the can, with its retro, reverse cool appeal, is really all that matters in the contemporary world of The Studiously Hip.

See? Now…my question is, which do I really feel, the urge to giggle uncontrollably because the survey appears so obviously bought ‘n’ paid for by the megabrewers? Yes, sports fans, yet another lame and increasingly desperate attempt to hogtie all us craft beer weirdos and drag us back to what they continually trumpet as “Real Beer”, those traditional American crapped-up adjunct Pilsners that, for about 100 years, were pretty much all emerging American beer novices had to even consider drinking. Or…is that initial bummed-out reaction I felt that whispered into my ear, “Well, it IS TiVo, after all, and their research MUST be credible”? That micro-second of childish naivete passed almost instantly but it was there and, for many millions of Americans, conditioned not to think past their first, adrenaline-fueled impulses, that will be plenty of “evidence” to send them scurrying off to their computers to loudly trumpet the ascension of some Abomination In A Can like Natural Ice – which, I absolutely promise you, will show up on NO poll ANYWHERE as a “favorite” beer of any sentient group of warm-blooded bipeds currently existing on Planet Earth.

With all due respect to TiVo, an invention which I like a LOT, nobody ever said that a poll taken by a for-profit corporation is presumptively objective and beyond the possibility of Influence. The first and most fishy aspect of this “data” is the simple fact that, in a country in which craft beer sales continue to skyrocket annually while traditional megabrewers continue annual decline, not ONE craft beer – not even the tier-straddling monolith which is Samuel Adams – shows up as anyone’s late-night sipping preference. If it is not the fact of the matter, the results STRONGLY suggest that this “data” was compiled by and for said megabrewers as one more tired, old attempt at Total Denial of the indisputable FACT that Americans are turning away in record numbers, every year, from the bland, soulless, packaged mediocrity of traditional adjunct Pilsners. If your product cannot, in any sense, compete with the craft brewers’ wares in terms of flavor, intensity, character, and variety, what do you do? Easy: in the grand tradition of Anheuser Busch’s industry-standard strategy, you simply Lie, Deny, and Decry. “We’re still Number One!” they chuckle nervously, “This craft thing is all just some fad, like swallowing goldfish or panty raids. It’ll pass and then people will come home to the Real Beers, like Bud, Miller, Coors, and Natural Ice!”

No kidding, I mean, WTF?

According the TiVo study, people get dumber as the night progresses, going from the hipster appeal of PBR with Colbert and Stewart, and then a long gap before PBR raises its sticky-sweet head again with the hipsters who watch Carson Daily. (Apparently, there are quite a few college professors still awake, either grading papers or cavorting with coeds, as Heineken pops up as the third beer of choice.) You’ll notice, of course, that there is not ONE single ale listed in the entire survey and this is how we know that Something Major Is Up with TiVo’s conclusions. America, more than at any time in its history, is Ale Country. Yes, its an undeniable fact that the panorama of industrial lagers are still the largest-selling beer category in the US. It’s to be expected, in an age of changing tastes and values, that the old and outmoded dies hard. But to even begin to suggest, in the year 2014, that NOBODY drinks any ale at all as their preference – the clear subtext of this “data” – after 11 p.m. is flatly absurd.

My purpose in relating this to you is simple: I want everybody who loves beer and the amazing growth of our American-owned (AnheuserBusch, now AB/InBev, and MillerCoors, which account for better than 65% of all adjunct lager sales in the US, are Brazilian/Belgian owned and British owned, respectively), small-production, local breweries to know that this information is being circulated, daily, as a part of the grand strategy of the corporate brewing giants to bring us all back in line; back to the days when there was no independent brewing and 98%+ of all beers sold in American taverns, restaurants, and supermarkets came from three brewers: Anheuser Busch, Miller, and Coors. As much as I despise everything they stand for – the cynicism that lies at the root of the idea, in any realm of American commerce, that “good enough” is the best we should ever hope for  – even I can’t argue against the idea that, as you watch your business being eroded out from under you, you do what is necessary to fight back. I get press releases like this one from Zeno all the time; literally three to five every week, from PR firms all over the planet. You never see even 5% of the misinformation and manipulation that’s being floated by Big Business because guys like me, who do see it, usually just hit “delete” and go on with our lives. But, in the days to come, you can expect to see reiterations and regurgitation of this “data” on other websites. probably presented as The Gospel Truth. 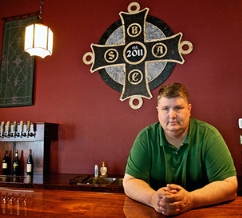 As my Facebook pal, owner/brewer Jeff Whitman, of Idaho’s dazzling new Selkirk Abbey Brewing posted just this morning, “STOP REPOSTING NONSENSE!” One of the facts that drive the strategies of AB/InBev, MillerCoors, and the other megabrewers is the firm knowledge that, in this age of Fox News, just seeing/hearing something in a public forum carries a certain weight and lends the statement credibility. DON’T fall for the lies. Question everything, do your own searches, and form your own conclusions. If you do, you’ll be able to read stuff like what I reposted above and smile…instead of tearing your hair out.

To Submit a Beverage to The Pour Fool: