For this year’s review of  Deschutes “The Abyss” Imperial Stout 2014, I was thinking, honestly, of just cut ‘n’ pasting one of my previous reviews and seeing if anybody noticed. It appealed to my, er, special sense of humor. But then, the bottle showed up at my door and I tasted it. Nutshell? Quite possibly the best edition of The Abyss I’ve ever tasted. Really. Which is Saying Something…

“I’d like to pay some firefighter to run into one of those concrete buildings they use to practice on and shout ‘Theater!!‘  I think that would be really funny…”

Deep Thoughts…The Abyss creates them the way a pound of ground beef creates a puddle of drool underneath my Boxer dog.

I’ve never once sat down with a pint or bottle of this iconic American Imperial Stout and not wandered off into thoughts of all sorts of things which have nothing to do with the beer at hand. I try. I always tell myself, “Just focus on the beer, okay? Pay attention to tastes and textures and note how they change as it warms…”  blah-blah-blah, ain’t gonna happen. The Abyss exerts a powerful charm upon the human mind and it frees me, if no one else, to ponder the imponderable, because I’m sipping the imponderable as I ponder it.

“My grandfather used to say, ‘Son, there are only two ways to handle a woman…and nobody knows either one of ’em’.” 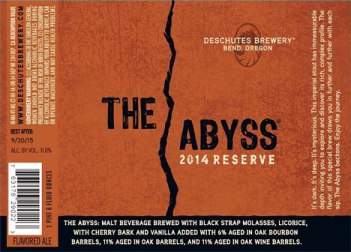 The 2014 Edition of Deschutes annual Trip to The Dark Side of The Force opens with a startling impact that hasn’t been a part of any of the vintages in the recent past. The last one that hit the palate with this much immediacy and verve was the 2007 and that has now matured into one of the truly sublime versions of this ale; possibly the best American Imperial Stout ever made. As opposed to the ’07, which entered the piehole – even when brand new – with a viscous wash of molasses and chocolate and broad, deep caramels, 2014 explodes with fresh ground black coffee and tobacco that registers somewhere between a less sweet pipe tobacco and a Cuban cigar. A massive and truly fine bitterness shouts out its presence in this ale but it doesn’t taste at all like any hops-driven bitterness I’ve ever come across. It’s a lot more like drinking a strong-brewed cup of black coffee, with that pleasant, almost-grainy bitter flavor and savory finish. The small miracle that underlies each version of this ale – which, almost irrationally but very much in keeping with the Deschutes aesthetic, is tweaked a bit every single year – is that every infusion mentioned in the label description is clearly and unequivocally present in the flavor profile. The licorice, usually the dominant flavor, is in perfect scale with the coffee and tobacco. The vanilla accentuates the natural vanillins that come from the three types of barrels used in aging – wet Bourbon casks, new oak, and Oregon Pinot Noir barrels. Even the cherry bark, for God’s Sake, pops up its little head in a subtle background flavor of Brandied cherries and pencil shavings. The complexity is, as usual, near mind-boggling.

“I watch the guy at Costco make me a hot dog, wearing a beard bib and a hairnet, and I think of Karma…Not, like, Buddhist Karma. My friend, Karma, who married a guy who worked at Costco and she made him wear the beard bib in bed. The hot dog guy always wonders why I’m laughing when I pay him.” 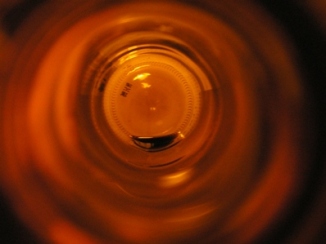 But what sets this 2014 apart is that first impression; that whoppin’ detonation that is delivered mercilessly with the first sip. I’m not kidding, here, or being hyperbolic because I’ve run out of adjectives. (Any day, now) This was shocking. If you’ve had The Abyss, like I have, since its inception, this one is guaranteed to stick in the memory for years. This has always been among the largest and richest and most concentrated of all US Stouts but it was also always a beer that unfolded its glories with a leisurely grace. This one is more like a strip show than an unfolding. Wham!: first sip and every sip…and as the glass warms up, the flavors expand and that wash of dark impressions that spreads like an oil spill soon follows and swamps the senses. I taste an increasing number of Stouts that aspire to the scale of The Abyss and Parabola and Dark Lord and Hunahpu’s and Speedway and KBS…and some even sorta work. Only a  scant handful, like River North “Avarice”, actually achieve this level of power married to grace and complexity, and none – not one single American Stout I’ve ever tasted – has surpassed The Abyss.

In over 40 years as a beverage writer, I had never given a 100 point score to ANY beverage before 2012. Part of that was because, for a long time, I simply refused to assign scores at all, but most of it was because I hadn’t found anything that I felt merited it. The first one was given to The Abyss 2012 and I’ve since awarded four or five. This then, makes it five or six.

“You can put beer in a barrel and everybody loves it. Wine and Whiskey, same story. But put your obnoxious boss in one and everybody gets all fussy about it.”