[This first appeared at seattlepi.com in February of 2014. It’s reposted again here because, well, a lot of people still ask me “What red wine goes with chocolate?”

Last  year, just after our annual pre-Valentine’s orgy of wine and chocolate events/pairing suggestions/tastings, my esteemed colleague, Paul Gregutt, posted a very carefully-worded caution on Facebook. Paul, it should be said, is one of the most polite writers I’ve ever encountered, so his post on the real truth about red wine and chocolate – that it’s really a fairly lousy and almost defiantly problematic combination – was so tentative and genteel that even the most staunch, intractable advocate of the red-chocolate school would have had to work to take offense. Unburdened as I am with Paul’s brand of Northwest uber-gentility, I’ve said basically the same thing to people who have come to me in the past, asking for suggestions for what red to serve with which chocolate. My standard response has been the same for about twenty years. The two-headed monster of wine-food pairing, for me, has always been: “What Chocolate with Wine” (or vice-versa) and/or “What Wine Goes With Cajun Food”. Every time I hear either one, I feel like Carl the groundskeeper in “Caddy Shack”: I try everything and nothing kills the monster. But here it is again, in a nutshell: What wine goes with Cajun food?  BEER. ICED TEA. SODA POP…NOT wine. What Chocolate goes best with dry Red Wine?  NONE OF ‘EM.

The exact problem with dry red wine and chocolate is fairly simple: sugar. An excess of sugar makes a dry red taste sour. It’s a matter of contrast. In the same way that the Spanish discovered aeons ago that salty foods make red wine sweeter, sugar content in sweet foods overwhelms the sweetness of a dry red and makes it taste sour by comparison. The easiest proof of this is to make a cup of hot chocolate along with your coffee, in the morning, and taste the chocolate before you taste the coffee with cream and sugar. The cocoa coats the tongue and makes the sweetened coffee taste metallic and sour. This is a daily occurrence, at my house, where I have to make my squeeze’s coffee first, before I mix up my cocoa. If I slip and taste the chocolate, I’ll have no idea what her coffee tastes like.

Do Not Pair With Red Wine

A sweet red is another matter. Chocolate with Port is a classic and delicious pairing that makes sense because most Port is as sweet or sweeter than most dark chocolates. The flavor sets (one of the primary natural flavors in many red wines is chocolate) are compatible because the sugar changes the flavor of the cocoa and amplifies it, boosting the natural chocolate component, while the other natural flavors derived from Touriga Nacional, Touriga Francesa, Tinta Roriz, Tinto Barroca, and other grapes used in Portugal are generally very compatible with chocolate. But even Port has its problems as a chocolate pairing, mainly due to temperature. Most chocolates are tempered to melt at the approximate temperature of your mouth. We’ve all tasted chocolates that require chewing and crumble to bits before melting and while some taste fabulous, they’re not the luxurious, hedonistic thrill ride that you get with something that literally “melts on your tongue”. But the ideal temperature for drinking red wines – even Port – is about 30 degrees cooler than that, so it tends to slow the melting process and produce a gummy sensation as the chocolate is arrested mid-melt. But beyond even those considerations, the simple fact of chocolate is that it’s fatty. Wine is all totally non-fat, of course, and if you know anything  at all about food pairing, you’ve undoubtedly heard that fatty foods require a wine with acids sufficient to cleanse the fat from your tongue and allow you to taste the wine at all. This is the basic reason why nearly all Italian wines read as tart to American palates, as the Italians fervently believe that wine should be consumed with food, period. They view our American habit of just sippin’ some vino as wrong-headed, at best, or deliberately perverse, at worst. Italian vintners take great pains to enhance the acid content of their wines and that one central aesthetic makes them fundamentally different from California wines that we all drink, from time to time, which are notoriously low in acids. This fact is changing, to some degree, but our 80+ year cultural conditioning has largely centered around California wines (Washington and Oregon wines are naturally more acidic), so we’ve become used to the lower acids, which make the wine softer and less overtly tart.

REALLY Do Not Pair With Red Wine (photo by seriouseast.com)

If not for the sugar factor, then, wouldn’t a nice, tart Sauvignon Blanc or a lean Sangiovese sufficiently scour the palate and work for chocolate? No. Again, flavor compatibility becomes a factor. Chocolate grapefruit is not a flavor combination that even Andrew Zimmern would appreciate and grapefruit is the most common flavor attribute for thousands of whites, most especially Sauv Blanc and even many Pinot Grigios. Most of the fairly narrow range of usual white wine flavors offer no better compatibility. I’ve done a Recioto di Soave with a 70% Dark on one memorable occasion and was surprised that it was fairly nice but that’s because of the whoppin’ sugars in the Recioto. But it was not a combination that I’m eager to try again, anytime soon. My Domestic Partner and I have, for about nine years, now, been part of a wine-tasting group that we started when we owned our shop in Woodinville. Without my knowledge, we had scheduled a red wine and chocolate tasting for February. When I found out, I immediately emailed everyone and asked if we could pair the chocolates with other beverages: liqueurs, cordials, whiskey, and beers. We all finally agreed that it would be okay and I paired a flamboyant Theo Chocolates Coconut Curry Bar with Lost Abbey’s titanic Serpent’s Stout, a beer that’s blacker than the pit of Hell and dry as the Sahara. The combination was light years better than any of the 50 or so red wine and chocolate pairings I’ve grudgingly suggested in the past. Someone else brought a lovely Blackberry liqueur and paired that with Fran’s 70% Dark. Another winner. The only flabby, unfocused pairings we tasted were the dry reds with foods that had chocolate in them. Only one, a chocolate chip-laden trail mix, worked at all with the bone-dry Washington reds.

My step-son, back in 1990, said this to me one morning, as I fired up the morning’s obligatory coffee pot: “Coffee is a better idea than it is a smell and a better smell than it is a flavor.” I agreed with him. In that same way, the voluptuous character of a big, strappin’ Red wine seems, even to me, like a proper and almost inevitable match for the similarly voluptuous appeal of a luxury chocolate. But, in reality, this has become the universal cliche that it is mostly because of inertia. Most of us hear it and never stop to ask if it’s really the ideal match. In researching this, I asked about a dozen wine trade people and eight beer trade pros to take a day or so to think about pairings and get back to me with recommendations. Most of these folks were, as I was back in 1995, stunned to realize that, once they stopped to question the idea, they had never actually had a red-with-chocolate pairing that they could even call a total success, much less ideal. To a person, they all admitted that they’d be far more likely to have a fine chocolate with lots of other beverages other than a dry red, even though more than half said they’d still prefer a Port or a Recioto di Amarone. In Italy, in fact, there is a school of thought that says that an unsweetened chocolate bar is a perfect match with a well-aged Nebbiolo or Barbera and, having tried this, I certainly see their point. IF I were to go back to the idea of reds with chocolate, that is how I would do it, now, every time, working on the principle that unsweetened chocolate eliminates the sugar conflict and most of the fat problem, too. But what I would like most is to help nudge – gently, without bruising – as many people as possible off the “classic” Red Wine with Chocolate Tasting. It is almost always based on nothing more than the errant notion that a chocolate you dearly love and a big Red you dearly love must be great together. That reasoning is no more practical in wine than it is with any other food pairing. To prove that, just substitute the red wine in that equation with your favorite oyster. Both fabulous but…chocolate and oysters, together? A train wreck waiting to happen.

The noted wine scientist/writer/taster, Emile Peynaud, writing in his book on The Taste of Wine, opined that “thanks to the astonishing diversity of wine styles, one can always be sure of finding one (or even several) that will go with a given dish, with a few exceptions.” The primary exceptions he mentions is…chocolate.  He proclaims that chocolate desserts are “to be avoided, and chocolate mousse above all.” His reasoning is rooted in the obscure fact that dark chocolate, just like Red wine, contains tannins; more tannins, in fact, than that exemplar of tannic effect that most wine writers use: black tea. Tannins in an acidic mix like Red wine taste astringent and that exacerbates that “sour” impression. Peynaud’s reasoning, taken with mine and the rest of the school of thought that calls BS on the Red/Chocolate idea, makes a very convincing case for at least thinking about finding a more amenable partner for that fabulous Adamei, A-Mano, Scharffenberger, Fran’s, Dagoba, or other decadent treat you’ve found, rather than just knee-jerking yet another in the endless parade of Square Peg-Round Hole tastings that never quite seem to live up to their billing. 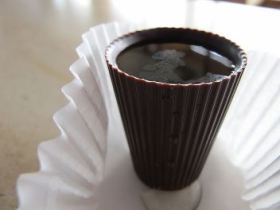 Some people, of course, will disagree with this and, as has been my mantra since starting The Pour Fool, “make yourself happy”. If you love Red wine with Chocolate, please, enjoy. I have no judgment to make and no ax to grind. But, next time you’re asked to pair a brilliant chocolate with something to drink, at least think for a moment, first. The sheer din from the chorus of hearty agreement with Paul’s statement against the wine and chocolate idea should give anyone pause. Most of the people who responded to his Facebook post were winemakers or wine merchants or wine professionals of some stripe and all lamented yet another year of having to try something which clearly doesn’t work. Food  – or, make that “chocolate” – for thought…

One thought on “Red Wine & Chocolate: The Conflict of Concept and Reality”