In helping run LetsPour.com for three years, I had a lot of opportunity to experience CCBC’s beers and to talk with you and your staff about how to get Cigar City out to all the millions of people who wanted some. I found my dealings with everyone there to be refreshingly direct and BS-free and, of course, the beers were just to die for. For my birthday in 2010, my boss flew to Tampa and brought me back a case of assorted CCBC stuff, which remains one of the top three gifts I’ve ever received. All of that is why I’m writing you today.

Sooner or later, some brewery owner is going to stare down the barrel of one of those prohibitive buy-out offers from Anheuser Busch or AB/InBev or whatever that pack o’ vermin is calling itself this week and they’re going to think beyond the planetary-scale impact such dollars will have on their own bank accounts and realize that pulling the trigger on this deal, while making that villa in the Bahamas a lot more feasible, is also going to sentence them personally and their staffs to forever being considered sell-outs and greedheads and douche-nozzles by many, many of the same people they saw come into their taprooms and growler stations when they were just starting out. It will permanently remove them from serious consideration when American craft beer fans speak of the country’s great breweries. Because the instant the last curlicue at the end of their signature trails out on that sales agreement, that brewery is no longer a part of that booming American phenomenon called “Craft Beer”. It cannot be. Because it is now nothing more than a regional outpost for corporate greed, bean-counting, arrogance, and Money Is Everything thinking. 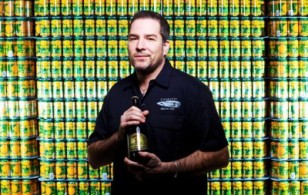 I’m going to offer an opinion here, an opinion built upon my 20+ years in the beverage trade and job-driven observation of sales trends and marketplace dynamics: I firmly believe that Cigar City has the potential to make a LOT – as in “hundreds of millions” – more dollars in remaining independent than it would if you sell it to Anheuser Busch. I haven’t been able to honestly say that about any of the breweries they’ve already acquired, although Goose Island comes close, but CCBC is that unique and wildly eccentric blend of artistry in execution coupled with thinking and creativity that is SO far out of the box that the box may as well be on Pluto. There is literally no other brewery in the US quite like yours and my real, legitimate, well-founded fear is that, if AB is allowed to get its hands on it, what’s happening at Goose will happen in Tampa. That great creativity in Chicago is now being glossed over by a company which really only understands and values light, mild, unassertive beer styles – indeed, openly scoffs at these, as in its smarmy Super Bowl ad – and the VAST majority of dollars spent on Goose Island advertising goes to the least distinctive and most generic beers, the 312 series. That’s the way AB has worked for 100+ years: Lowest Common Denominator thinking, cheapest production costs possible, the minimum thing they can stick in a can or bottle and call “beer”. And that’s what they’ll do to Cigar City.

I don’t know you at all, really, and have no idea how you perceive your place in American Craft Brewing, but I can tell you how I view you: a true innovator, a risk-taker, a visionary. Your brewers had that untamed creativity in them and you let them work. The results speak for themselves – LOUDLY. Yes, you’ll get a HUGE payday if you sell to this foreign company which really wants CCBC not for the money it would bring in, because your best year ever wouldn’t even move the needle on their little financial seismograph. They’re looking for credibility, a way to have a say (eventually the final say) on craft beer in America. The pattern of how they’ve planned, geographically, their purchases of these breweries reveals their strategy. NY, IL, OR, WA, FL…look for Colorado next, and then California and Michigan and Vermont. NOTHING in their entire corporate history suggests that they can or will be satisfied until they can once again control America’s beer market, just as nothing suggests that them doing that will mean anything more than blandness, mediocrity, and bottom-line decision-making.

You owe me – or any other craft beer fan – absolutely nothing. Sell if you just want a payday and ride off into the sunset. I wouldn’t stop you if I could. But if this is, as the jamokes at Elysian and 10 Barrel loudly claimed, about “building the brand” and “pleasing more consumers” and “growing our business“, PLEASE, sell CCBC to ANYBODY else. It takes a lot of selective blindness to imagine that no other large beverage concern would want Cigar City. MolsonCoors, SAB Miller, Duvel Moortgat, Diageo…hard to believe that none of those or some of the other giants wouldn’t leap at the chance to acquire and help grow Cigar City. Better still, how about a local bank that would help you set up a plan for your employees to buy the brewery, recapitalize it, and Keep It Local, as was done at Full Sail?

AB walks in with a bag of money and starts a mating dance and no one else has even been asked if they’re interested? Wouldn’t a bidding war be kinda…nice?

Or, Joey…build it yourself, maybe slower than you wanted but solidly. YOU keep the money that comes with broader distribution. Hey, it’s worked pretty damned well for Deschutes and Dogfish and Stone, so it’s clearly not impossible. YOU have the chance to be the American Craft Brewing legend that told the Great Satan to go f__k themselves. If you want to cement the loyalty of craft fans everywhere – the ones who have helped build craft beer into the largest beverage phenomenon in a century – telling AB to stick it WILL do exactly that.

Sell to whomever you like. It’s your company. But I’m just asking that you explore every other avenue open to you first. Cigar City is SPECIAL. PLEASE…don’t help it to become ordinary.

7 thoughts on “Cigar City vs. AB: An Open Letter to Joey Redner”