This beer is voluptuous and immensely sensual; one of the most purely sexy ales I’ve come across in a long time…

A lot of people – usually the ones who characterize themselves as “purists” – will claim that putting a wine or whiskey or beer into a barrel is an attempt to hide something. And that’s true, sometimes. Wines are put in barrels every day for no better reason than to cover up flaws with vanilla and smoke veneer. And I’ve had beers that spent time in barrels that were so deadly dull that I wound up wishing I could have just chewed on the barrel instead of drinking them. (In whiskey, it’s just a silly argument, unless you’re some pervo who likes White Dog a LOT.)

But the right beer in the right barrel occasionally works a kind of magic that ends up producing something that’s far more than the sum of its parts and that’s what I found in the barrel-aged version of Full Sail Brewing’s lovely 2014 Wheatwine, a fat, high-octane ale brewed in the style of a Barleywine but using 100% wheat mash. It’s the same 2014 batch of the base ale, put up in wet Wild Turkey barrels for a full year and then given a liberal amount of time in bottle before its debutante ball. I tasted the original about two weeks after its 2015 release and remember it fondly for its sweet, chewy notes of taffy and fruit leathers and mild caramel, all on a creamy, boozy framework that let its floral, herbal hops shine through a forest of warm malts.

Wheatwines are not new. Even around these parts, there are some others. Big Sky Brewing in Missoula makes two of ’em, “Power Wagon” and their original “Five Valleys”. Ninkasi of Eugene made a whopper example with their “Sasquatch Legacy”. Burnside, in Portland, made a chile-infused version that I was lucky enough to run into at their taproom, the stunning “Kati-Ma”. So the idea’s been around. But Full Sail’s is the best example yet of what this stunning twist on the Brit Barleywine tradition can be and the barrel covers up nothing. All the hallmark flavors of the ale announce themselves loudly; a Full Monty presentation that ladles out the naked wheat virtues while just gilding them with oak and whiskey. The wheat provides a vibrant contrast to the darker flavors of the usual barley. Its peppery character and mild spice augments a caramel cast that’s short of what barley imparts but not short enough to constitute a lack. Added to that fresh revision of the concept is the absolutely beautiful character of the barrel, with its native vanillins and silky tannins underpinning that lambent Bourbon flavor in a vivid cascade of big coconut, crème brûlée, burnt sugar, dates, grilled apricots, candied pecans, toasted wheat bread, baked apples, and dulce de leche. This beer is voluptuous and immensely sensual; one of the most purely sexy ales I’ve come across in a long time. If it’s a tad sweeter than I usually like in my Barleywines, it more than compensates by virtue of its sheer, hedonistic drinkability. I had two bottles of this and I want More – SOON. I don’t know exactly how much of this is around but I suspect that those who want it should get it, like, right now, or risk missing out. For the geeky among us, it’s 12% ABV and 42 IBUs, making it somewhat hoppy but not pushing the flowers to the front. 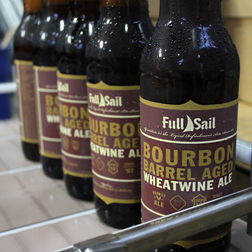 I do happen to know that one insanely fine brewery in the region got inspired by this one and is now making their own version, having started the brewing run while drinking bottles of the Full Sail. It’s hard to imagine an even better version of what’s in that handsome bottle above but I applaud the notion of other breweries trying. Wheatwine is a distinctly different animal from its Barley-based cousin and it offers even better drinkability for the less geeky beer fans among us. Make no mistake about it: If you love Northwest craft beers, this is one you do not want to miss.  97 Points