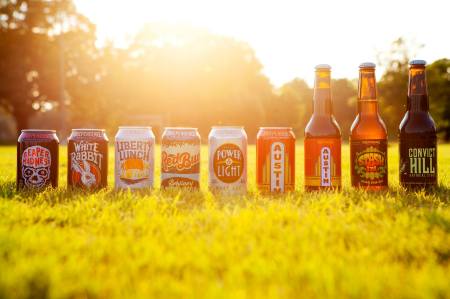 Independence Brewing of Austin, By-God Texas, just sent me a couple of cans of their seasonal summer IPA, Independence Brewing “Liberty Lunch”…which did, By God, kick me squarely in the seat of the britches. I have to confess to knowing almost nothing about Independence prior to opening that FedEx box but the contents of those cans sent me literally scurrying (and, yes, scurrying IS unseemly in a gentleman my age) for google and a look at IndyBrew, at which point I went, “Huh?” 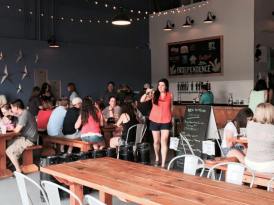 The taproom at the American Independence Brewing, In Austin

What I found was a bunch of photos of a rather palatial taproom that made me wonder, for a few alarming moments, if Independence Brewing might be another one of those Anheuser Busch “stealth breweries”; ones they run under a different name, with ownership carefully hidden. Turns out that there is another “Independence Brewing”…in Pune…India.

This now sorted out, I waited a few hours while the cans cooled and then cracked one.

I must now retract my previous sentiments that Jester King is all that’s going on of note in Austin. While I haven’t tasted any of the rest of Indy’s offerings – a line-up which fills me with curiosity (not to mention a definite thirst) – what I can tell you is that, in that rapidly growing little universe of (mostly lame) summer-weight, low-alcohol IPAs, Independence has whupped up one of the most rock-solid efforts I’ve tasted yet and thoughtfully put it in a can, for travel to outlying precincts like Seattle and Tacoma. The initial impression is a bit tricky, because there’s more going in this bright, uber-crisp ale than at first meets the tongue. It was about three sips in that I began to taste the other, more subtle little grace notes afloat in this delicious concoction: candied orange peel, lemongrass,  pink grapefruit, melon, white grapes, resins by the ladleful, and a wonderful, flattering intimation of spruce tips on the slightly spicy finish. The bitterness is beautiful; assertive but not overpowering, making this a beer that crafty veteran craft drinkers can use to help ease their friends’ transitions from watery, corporate crap-beer to something tasty and American Made.

At this point, Independence Brewing is not distributed here in Washington, which just aggravates the hell out of me, frankly. I’m reminded of a certain cheerleader with whom I went to high school, who knew damned well that my studious nonchalance around her was just a facade (I was HOT for this little person) and one day walked away from me, flipped up her cheerleading skirt, and said “This is as close as you’re ever going to get“, as I caught that little crescent moon of white cotton cheer trunks and almost swallowed my tongue. Independence sends me a warm-weather IPA like this and I can’t buy it? It just ain’t fair, I tell ya. But, somehow, I suspect that, as good as what’s in this can surely is, it won’t be all that long before I walk into Pint Defiance, one rainy afternoon, and find Liberty Lunch and Reaper Madness and Red Bud and Power & Light hunkered down there in the cooler, at which point I’m gonna grab every damned one of ’em and go home and have my own little party.

All cutesy BS aside, if you’re living somewhere that Independence is sold and you pass up this SEASONAL offering, turn in your IPA card, immediately, ’cause you, my friend, blew it.   94 Points