Mark Hood of Sound Brewery, in tiny Poulsbo, Washington, sent me home with a trio of bottles last week; a series of ales that he made in cooperation with NetherRealm Studios and Warner Bros. Interactive Entertainment, representing characters in the wildly popular video game series, Mortal Kombat X. If it seems odd that a brewery like Sound – a verging-on-medium-sized brewer in a small, out-of-the-way Washington village – should be tasked with making beers that would appear to have a literal world-wide appeal, it might clear things up to know that Mark, before he started Sound Brewery and followed his heart/muse, was a Vice-President and game developer of the company that created MK, and worked on such notable games as Leisure Suit Larry and the Kings Quest franchise.

We sat to talk and basically just catch up because I rarely get to Poulsbo, these days, and because, out of all the people I’ve met in my decades in the brewing trade, Mark is one of my favorites, both for his naked and irrepressible passion for beer and his enormous creativity – along with brewmaster Brad Ginn – in realizing what he tastes in his head.

Although Sound is in fairly narrow geographic distribution for its core beers, the Mortal Kombat X Series – “Raiden” Imperial Saison, “Sub Zero” Imperial IPA, and “Scorpion” Imperial Stout with Chiles – are being shipped, by distribution partner Global Beverage Traders, all over the planet. I received a question from one reader who asked about these beers, saying, “I don’t get why this project wasn’t taken to some great brewery like Dogfish or Stone. Lots of people are going to be interested in these!”

I replied with this, which is the message that’s the point of this post: “They were taken to a great brewery. You may not have heard of it, but it is just as great a brewery as those two you named.”

When we first sat down, Mark smiled at me and said, a little wistfully, “Y’know, yeah, we did the Mortal Kombat beers for marketing exposure, obviously, but I think we made some really great beers.” 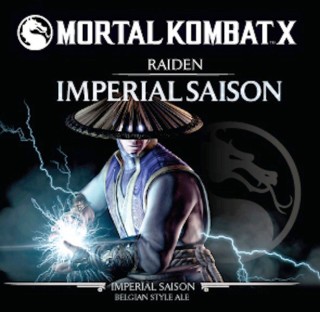 At first sip, “Raiden” Imperial Saison will strike a lot of Belgian ale fans as very big for a Saison. That first impression, when it hits the tip of the tongue, is almost shocking in its intensity. But as it crosses your palate, a magical thing happens: the flavors and complexity unfold, like a flower, rather than smacking your senses like a dead fish. The subtlety and balance and…well, the only proper term is “grace” of this ale is stunning. The hallmark traits of a top-shelf Belgian Saison – spices, cloves, banana, tropical fruit, sweet grain flavors, bubble gum, and flowers – are all lined up prettily, augmented by a perfectly framed hoppiness that tends toward sweet herbs and citrus, rather than resiny excess. There is a fine edge of bitterness, befitting Raiden’s Northwest roots, but it’s so well integrated into the overall flavor profile that it just seems natural and right, not assertive and showy. The sweetness level, unlike a lot of what we Americans are calling “Imperial” Saison, is there but restrained. I don’t know the exact sugar content but it’s flattering without becoming cloying. This is one of the precious few Imperial Saisons that gets everything right, in balance, and is just flat compulsively drinkable. 96 Points

“Sub Zero” Imperial IPA avoids every single cliché of the modern American IIPA by ladling out a forthright and robust malt bill, giving the finished beer a lovely, appealing amber luminosity and a deft balance that allows the BIG, generous Washington hops to shine without becoming a test-of-manhood BitterFest. Assertive hops, as Stone has proven over and over again, can be put into a drinkable balance but you have to risk the wrath of all the HopHead frat boys whose mania for “More IBUs!” drove the craft brewing culture into that decade-long arms race of hops that’s only lately begun to subside. One distinct advantage of Poulsbo’s realtive isolation (It’s only fifteen miles from Seattle but you have to cross or drive around a LOT of water to get there) is that Mark and Brad rely more on their own sense of What Works than some silly escalation among neighbors. When Sound was originally opened, Mark vowed to never make an IPA but eventually capitulated after a thousand requests from patrons. Having once made that concession, Mark and Brad proved just as resourceful in turning out their stable of IPAs as in making the new American classic “Monk’s Indiscretion” or their celebrated “Dubbel Entendre” and “Tripel Entendre” or their big Stout, “Ursus Americanus“.  “Latona“, “Liberty Bay“, “Reluctant“, the Belgian-inspired “Bevrijder“, the Imperial “Humulo Nimbus“, and huge Triple IPA, “Humonkulous” are among the best currently made in the Northwest, and “Sub Zero” ranks with the best of those. This is a MONSTER mouthful of pine/spruce resins, citrus peels, sweet herbs, and subtle spices, all framed by a warm, mellow caramel character that brings it all into focus. Craft newbies will get a tasty, approachable ale. HopHeads will get the flower explosion they obsess over. This is an ale that would stand with any other brewery’s best work and one that does the game’s aesthetic proud.  98 Points 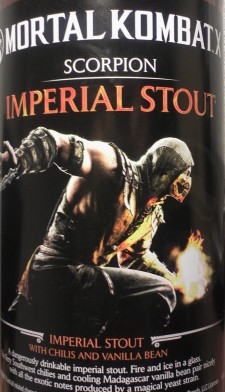 For me, however, the real masterpiece of this set – and, indeed, of Washington Stout-making in general, an area in which our state is woefully behind Oregon and California and Colorado – is “Scorpion” Imperial Stout. Scorpion is a huge, defiantly un-sweet, inky, palate-painting Stout, infused with chiles. I know, as I write this, that the last phrase in that description, “…infused with chiles“, is going to make a lot of people’s beer-lust snap shut off like Venus flytrap. “Infused with chiles” usually means, “like drinking straight Tabasco“, and I’ve sampled at least forty Stouts and Porters, in the past seven years, that were as clumsy and over-bearing as a mouthy drunk on a tilt-a-whirl. Here, the chiles are a surprising, hot, but nicely-balanced background note that doesn’t for a second mute the fact that you’re drinking a truly great Stout; something on the order of – dare I say this – Tomme Arthur’s immortal “Serpent“. Scorpion lands just a scant hair short of Serpent’s sheer viscosity but it’s an academic difference and that massive coffee/chocolate/molasses backbone gives this gorgeous ale a real aura of gravitas; that sense that you’re drinking something truly special, something you’re going to remember for years afterwards. Those who read this little electronic freak show regularly know my fondness for chile ales and that my favorite beer of all time is a Stout – Deschutes “The Abyss”. This is NOT a “Stout” in the same way as The Abyss or Bourbon Country or Parabola or Hunahpu’s. The infusion of the chiles sees to that. But it is, by a country mile, THE single, singular, signature chile beer that I have ever tasted. The skill on display here is unmistakeble and proves one of my central beliefs about American craft brewing with ONE sip: Any brewery can make a great beer. They come from tiny, under-appreciated breweries, unanointed by the “beer intelligentsia“, almost as often as from the Stones and Dogfishes and Cigar Citys and Deschuteses. For those who are willing to taste beers with no preconceptions about the stature of the brewery involved, this should serve notice that Sound Brewery, of little ol’ Poulsbo, Washington, is a truly great brewery and one that any American craft brew fan who considers themselves knowledgeable should experience without fail.  100 Points