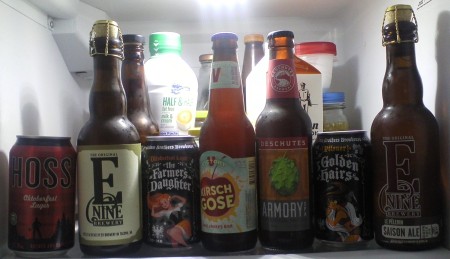 Here is email Number 100, in a series I’ve now been receiving for the past eight years…

“Aside from your well-established Deschutes fascination, what do you drink when you just want to have a beer? Don’t even try to say you NEVER sit down and sip a cold Bud or Coors. You rave about all these beers but you never say what’s in your own refrigerator, and your taste cannot possibly be just craft beer, all the damned time.”

This just happened to be the 100th request on this subject. Some were a bit more direct and some contained some dirty words but this was the first that ever suggested that I occasionally sneak a watery crap beer, once in a while, so this is the one that set me off.

I’ll come clean, here, about the only two mass-produced adjunct Pilsners I’ve consumed in the past thirty years. It was last October, in Cabo San Lucas. You can spend your entire Cabo vacation trying to find ANY beer that’s not mass-produced dishwater Pilsner. It was 95+ degrees for a week and we went to a local cantina for lunch. They had NO Diet Coke, no regular Coke, and the only sodas they had were Jarritos, which make me hurl, so I had two cans of Modelo Especial and more or less chugged them. They had so little flavor that it was exactly like drinking water, with that spicy food, and I was offered a third but turned it down. I drank an absurdly fine single malt Scotch, The Balvenie Caribbean Cask, all week and didn’t miss beer at all. But that was extraordinary circumstances and, back here at home, with all this gorgeous craft beer, there will never be a need again to swill poorly made plonk, just to cool off. That’s what water is for.

I sample a mind-blowing number of beers, each year; something on the order, usually, of 1,000 or so. I don’t drink these beers, as in “finish a glass or bottle“. I do the same as I do for wine: swirl, sniff, sip, spit. I’ve been doing that for over 35 years, now, and I’m good at it. I don’t need to drink the whole beer and, as I don’t want to wind up carrying my liver in a little wagon, hitched to my ass, I just taste and move on. But when I think about what I actually want to drink – a whole bottle or can or glass – what I usually go searching for is one of these below. I’ll list them under the photo, in case you can’t read the labels. But this is Steve’s Fridge; not every day but often enough that it’s not a fluke. Some, I buy maybe twice a year and some every month. But when I think of pure, uncomplicated, hedonistic beer pleasure, these below, asides from the plethora of Deschutes wonders that I routinely praise – and drink – are Everything Else.

And, in the interest of transparency, the ones I drink most, out of those pictured below, are the Celebrator Dopplebock, the Sierra Nevada “Celebration”, the Sound Brewery “Monk’s Indiscretion”, Fort George “The Optimist”, and Boulder Beer “Hazed”…which is somewhat misleading because availability is why I don’t drink many of the others – and many that I just cannot get, here in the remote Northwest – more often.

2 thoughts on “The Fool’s Fridge: Besides Deschutes, What DO I Drink?”