THREE (okay, FOUR, one a collaboration) insanely great beers from Deschutes…these arrived within about fifteen days and I took my sweet time in tasting and living with each of them…frankly trying, somewhat desperately, to find something, anything, that would allow me to actually, y’know, like, be an actual Critic. I rarely call myself a “critic“. I say “writer” because the VAST majority of what I’ve written in my life was not criticism. And “critic” suggests that rich vein of snark and cleverness that I try to eliminate. But “being critical” is not necessarily a flaw. I have, twice, contacted Deschutes privately and suggested that something didn’t seem right…and they listened, which was astounding. After all, they’re world-class brewers and I am Schmucky The Clown. But, in 98% of all cases (I did it on a calculator) I’ve just gone into my windup, checked the runner at first, gone to the stretch, and delivered a fat, slow softball right down the middle on Deschutes. And I’m doin’ it again, right now.

It’s bloody hard to find anything not to love about Deschutes Jubelale. I’ve said, many times, that it’s my favorite beer just to sit and sip and bliss out with. That description now includes three or four other beers that didn’t exist when I had my first Jubel but it’s still my Numero Uno pleasure ale. And, in this slightly different (EVERY year is slightly different) 2016, I believe that Deschutes has finally done a version of this classic ale that I can’t even imagine being any better. When Jubelale debuted, it was a beer far more about malts than hops. It was a deep, ruddy red-brown, warmly aromatic, mellow, a little viscous, and tasted like fruitcake and baking spices.That was in the early nineties(!), before the IPA became the end-all behemoth of American beer styles. So, over the years, Jubel evolved, slowly growing a more assertive, frontal hops presence. Its development roughly paralleled that of its spiritual cousin, Sierra Nevada “Celebration”, another winter seasonal that’s also grown horns and a deep, satisfying bitterness and is now, in fact, actually called “Fresh Hop IPA”. Jubelale is still called “A Festive Winter Ale”, which is the perfect description but is now as forthrightly hoppy as many basic IPAs or APAs.

This ’16 Jubel (I call it that because we’re practically married, by now) is a practically-perfect collaboration of chewy malts and evocative hops, singing in counterpoint. The malts woo with warmth and a satisfying creaminess and then the hops deliver an emphatic forehead smack of bitterness. If it seems a bit jarring, it is only in the sense that the hops come as such a bright, welcome contrast to all that initial richness. All the classic Jubelale elements are still in place: red berries, cherries, vanilla, sugar cookies, toast, sweet spices, Red Vines, and resiny depth, but the delivery is more assertive, more sure-footed, more…More. This has been, for two solid decades, one of the world’s iconic winter ales…and it is, if anything, better and better every year.  100 Points 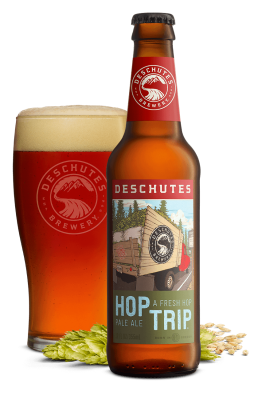 In the same damned box(!) with Jubelale was Deschutes Hop Trip, that annual celebration of the Willamette Valley’s resident hops growers and their bounty of resiny treasures. For those who don’t know, Deschutes sends a truck over to Doug Weathers’ Sodbuster Farms, near Salem, helps Doug’s crew PACK that cargo bed, and high-tails it back to Bend to get those hops into the brew tanks within four hours from picking! Those who screech about their bottles of IPA being fresh are generally kidding themselves. That “fresh” IPA that was just released? Those hops may well have been harvested weeks before and, if pelletized, maybe longer than that.

From field to bottle, Deschutes Hop Trip is in your glass as close to picking as any beer made in America. And, this year’s crafty combination of Bravo, Centennial,and Fresh Crystal hops – buttressed by a brawny roster of Pale, Extra Special, Cara-Munich, Carapils, Munich malts – achieves THE best balance of any Hop Trip of the eleven that Deschutes has crafted. The flavors lead with those hoppy virtues: grapefruit, wildflowers, orange and lemon peels, lime leaf, aromatic spices, spruce and pine needles, and a woodsy herbal tang. Those rest atop a solid plank foundation of graham crackers, roasted nuts, caramel, vanilla, toffee, and roasted grains. The result: enough resins to satisfy any HopHead, with a drinkability to let even craft newbies drink and enjoy. This is a little annual miracle; the virtual how-to manual of American Fresh/Wet Hop Ales.   1oo Points

Deschutes “The Dissident” has, in at least one vintage, been among the very rare Deschutes ales that I liked less. It was still a really excellent ale but, to me, it had been clearly surpassed by some other brewers, which is something I’ve thought about most of Deschutes’ line-up maybe twice. I found the sour a little ciderish and the infusion of cherries a bit lost in the flavor profile. So, I open this 2016 Dissident and taste what? Say it with me: “Cherries!” Big, fat, happy, tart, juicy Oregon-grown Montmorency cherries, not just present but BUSTIN‘, underpinned by a gorgeous, light, friendly, beautifully-integrated sour. The malt bill – Pilsner, Munich, Acidulated, Crystal 150, Cara Ruby, and Special B – gives this version muscle and the dark candi sugar lends a mellow caramel note, with the whole thing deftly pulled together by its fruity, spicy Belgian yeasts. Result: only TWO of those Oud Bruins like this can still stand with Dissident in a straight-up comparison: pFriem Family Brewers Flanders Red and Crux “Freakcake”, THE best Oud-style Belgian ale made in the US. (NOTE: The Dissident is a brown ale and the other two are Flanders reds, so the comparison is not exactly apt.) This Dissident is creamy and rich and beautifully sour and a pleasing tad funky and clearly shows its extended barrel time (40% of the batch aged in oak for twenty-two months!) My theory is that, in making Belgian-style ales, it takes even great breweries a couple of tries to get ’em dialed in. Dissident is now dialed all the flipppin’ way IN, and this one leaves absolutely nothing to be desired.  99 Points

Last…well, whew! I’m going to claim – and you are more than welcome to call Bullshit – that I knew what this ale would taste like before it was even released. I know intimately all four of the beers involved in this, trust me, ground-breaking collaboration – called “Collage 2” – between Deschutes and the mad genius of American brewing, Alan Sprints, of Portland’s iconic Hair of The Dog Brewing. The flavors of those four ales – Deschutes “The Abyss” and “The Stoic” and Hair of The Dog’s “Doggie Claws” and “Fred” – are, by this time, practically encoded on my DNA. Doggie: BIG, earth-shaking Barleywine. Stoic: A swaggering ironworker of a Belgian-style Quad. Fred: a meaty, rib-stickin’ American Strong Ale. And The Abyss: IMO, America’s best Imperial Stout. Both Stoic and Doggie have a very boozy, Cognac-like intensity, while Fred is full-frontal power and hops. And the Abyss is a dark, sinister wonderland of complex flavors and textures; one of the most engrossing and evolving Stouts ever made. My very first impression, upon reading that they were producing this collaboration (after picking my jaw up with both hands), was that it could, if their communal judgment slipped even a millimeter, be an epic mess. But knowing these breweries as I do, I knew that, if it didn’t work, we’d just never find out about the effort at all and it would be poured down a drain, somewhere, producing pickled herring the old-fashioned way. 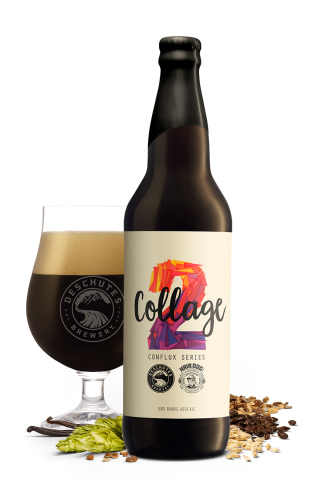 I was silly to worry. Deschutes/Hair of The Dog “Collage 2” is nothing less than an Achievement; one of the most intense, complicated, powerful, liqueur-ish and nearly overwhelming beers – of any style – ever to hit shelves in the US. This is 14% ABV, incredibly boozy and replete, like a 20 year old Cognac, and yet clearly shows the influence of all four beers. It leads with HUGE burnt sugar and molasses, followed instantly by roasted nuts, fruit leathers, stewed plums, brandied currants, dark cider, over-ripe pears, horehound candy, black coffee, copious licorice, cherry compote, vanilla, lurking intimations of various woods, brambles, sweet herbs, spruce resins, tobacco, and fig jam. It’s a little dizzying,  really, like everything I really enjoy in the entire realm of the word “beer”, all in one glass. Whatever I had in my head about what this ale could be, it surpassed it. It tasted almost exactly like what I had anticipated but I didn’t really believe that it could taste like that. Finding that it was all that and a bag of chips was a revelation. This becomes, immediately, one of the true landmark ales ever produced in the Pacific Northwest and, I believe, in the US. This is adamantly – and very seriously – NOT for newbies or the faint of heart. DO NOT pour this for your craft-shy friend who winces when he/she tastes a Double IPA, unless you know CPR and are packin’ a defibrillator. This stuff is The TRUTH.  100 Points

ART…this is the annual avalanche that comes from Deschutes with an almost off-hand grace. I’m not much into that over-reaching school of thought that attaches adjectives like “profound” and “life-altering” and “unprecedented” to stuff that comes in bottles…and yet, I’ve tasted a few things that did, in my mind, reach that level: Peter Lehmann “Stonewell” Shiraz 1995. Laphroaig “Lore”. Cantine Marisa Cuomo “Fiorduva” 2008. Tomasso Bussola BG Amarone Classico 2000. And Deschutes “The Abyss”, 2007, 2010, and 2015. And now…Collage 2 from Deschutes and Hair of The Dog. These four ales, actually, are what you get when brewing stuff out of water and yeast and grains and hops and the odd additive approaches perfection. It becomes Art, in the same sense as a great painting, Michael Jordan’s fade-away jumper, B.B. King’s voice, and The Pieta: something that moves the human spirit and elevates us momentarily out of the quotidian and into the extraordinary. GET ALL THESE. If you don’t, you will never know what wonders you missed.