NOTE: I’m about to give a bottle of Chardonnay, here, a rating I’ve never even come close to considering and I don’t want to bury that lead but the preface to doing this takes some time to get rolling. I’m delighted to know that this wine exists…but then I’m annoyed no end that, if this bottle of Chard is possible, why the hell aren’t more wineries doing this?

I have a whole truckload of friends who will tell you that, even eighteen years ago, I would skip my beloved Bainbridge Island wine tasting group on nights when we were featuring Chardonnay. I know most people don’t agree with this attitude and I even get why they love it. Chardonnay CAN be a wonderful, transcendent wine experience.

It’s just that it usually isn’t. 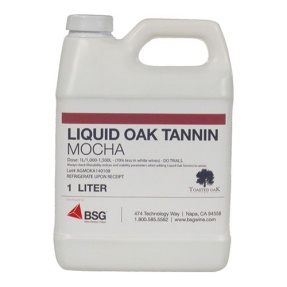 Of all the wine grapes on Earth – red or white – Chardonnay is the one that’s been the most abused, especially here in the US. California wineries, starting back in the fifties, adopted the practice of taking Chard grapes that were a bit underripe, overripe, or even just not all that good and aging the wines in new oak barrels, mostly to mask the shortcomings of wines that probably shouldn’t have been released at all. Some wineries, very much on the QT, skipped the expensive but honest means of producing barrel flavors – y’know, barrels! – and either dumped oak chips into steel tanks or used oak tannin additives that impart the same flavors but cost maybe 5% of what a real French oak barrel costs. They found a willing, even eager, audience for these oak-drenched vanilla and butter bombs and created “California-style Chardonnay”, a wine that tastes only vaguely like Chardonnay at all and more like a bottle of cream soda, minus the bubbles.

Happily, the pendulum is swinging back to the origins of Chardonnay, which are in France and mostly don’t involve barrel aging. Most West Coast wineries, now, are throttling back to fermentation and sometimes aging in steel or even concrete(!). Some blend barreled lots with unoaked lots to get a restrained, flattering touch of oak, rather than a vanilla milkshake. Many more are simply not leaving the wine in barrel for the usual 9 to 16 months, pulling it at 90 days, 4 months, or even just “when we like it“.

I have been actually excited by a bottle of Chardonnay exactly twice in the past ten years. The first was when I worked, briefly, in a Pike Place Market specialty store that featured All Things Italian. It was an odd bottle of Chard – from Venezia-Giulia in from Northern Italy – called “Father’s Eyes” from Di Lenardo Vineyards, a family-owned estate founded in 1878 and still run by the di Lenardo heirs. It was vibrant and expressive and jubilantly fruity and fresh and tasted nothing at all like an American Chardonnay. This was in 2009 and they had used the short-aging trick, to give the wine just a faint kiss of woodsiness and smoke. It was magical and reminded me of why I ever drank the stuff in the first place. That was it from 2005 onwards… 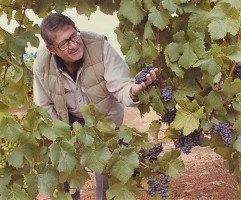 Cal Knudsen, communing with the vines

Knudsen Vineyards is a newer winery but a name that’s woven into the tapestry of Oregon wine in a deep and intimate way. Knudsen started as a vineyard property in 1971, when Cal and Julia Lee Knudsen, life-long wine lovers, planted grapes on 30 acres of gentle south-facing slopes in Oregon’s Dundee Hills and immediately became the Willamette Valley’s largest vineyard. The grapes proved to be flat-out fabulous, so, by 1975, the Knudsens planted another 30 acres and became the largest vineyards in all of Oregon. They went into business, along the way, with Oregon icon, Dick Erath, to form Knudsen Erath Winery but eventually went back just growing grapes. In 2014, after the passing of Cal Knudsen, the family decided to, once again, make wine under their own name, and Knudsen Vineyards was born.

Knudsen Vineyards is now 228 acres of some of the Willamette’s best vineyard land. Its 100% red clay-Jory soil – designated as Oregon’s official state soil – is blessed with perfect drainage and a mineral-rich base that lends its fruit a gorgeous, deep earth character and sweet minerals that suffuse every berry.

The new, as yet unreleased Knudsen Vineyards Chardonnay 2015 is…jaw-dropping. When first opened, there was a tiny, easily overlooked hint of sharpness that’s completely normal in a young wine but which blew off within minutes.  I swirled for a short while and tasted again and it was like a tiny explosion going off smack in the middle of my weary old wine aesthetic…”Oh, yeah, Chardonnay. I used to like this stuff and this is why!“…I let the wine linger for a few seconds on my palate and then swallowed. I’m so used to tasting wines, waiting out that first impression, and finding flaws and holes and imbalance that it took me about three or four sips to finally convince myself that there is nothing at all wrong with this wine. I sat and waited and it just got better with every taste. The flavors were hallmark Chard, at the core – yellow apples, ripe pears, sweet herbs, hints of citrus, buttermint, cream, gooseberries, and vanilla – and then swarming with grace notes of wheatgrass, white pepper, honeydew melon, star fruit, honeysuckle, quince, slate, and lime leaf. The balance is Perfect. The alcohol is totally transparent and integrated, the fruit is vivid but not effusive, the minerals are prominent but not pushy, the finish is dry and elegant, and the acidity is exactly what you want in a Chard that’s suitable for sipping but also a devastatingly fine food accompaniment. 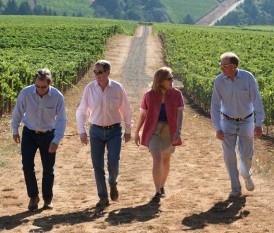 My wife was tasting with me and she is, if it’s possible, even more of a skeptic about Chardonnay than I am. She loved this wine. Her eyes rolled up in her head and she sighed, “Oh…wow!” As I am a well-traveled wine veteran, I managed to restrain myself from such undignified exclamations…but that’s exactly what I was thinking. Over the years, as wineries send me samples of Chard after Chard after yet another bottle of effin’ Chardonnay Damnit, I’ve dutifully tasted them and have even liked a few. Just in the past few months, in fact, I’ve written raves about Holman Ranch and Adler Fels Chards and meant every word. But this is waaaay beyond even that level of sterling accomplishment. Those were exceptional bottles of white wine that represent great value and are worth every penny.

This 2015 Chardonnay from Knudsen is transcendent; literally one of the two or three best white wines of any varietal that I have ever tasted from the US.

At $45 suggested, this is not a cheap Chardonnay. You can buy those anywhere, for well under $15, and they’ll even taste good. If you spring for the Adler Fels or Holman, they’ll deliver just about the best for that amount of money that you’re likely to find. But I urge you, if you enjoy Chardonnay at all, to treat yourself to this bottle and see why the entire planet has made this one grape, above all others, its favorite white wine grape. Just tasting a near-perfect Chard is a revelation and it’s a revelation that every half-serious wine lover should give themselves at least once.