I’m a North Carolina native. I love the place. I’ve adopted Washington, now, and have no desire to ever leave but NC occupies a very special place in my heart. The only thing, in fact, that I did not LOVE about the Old North State, when I left in 1992, was that there was only one craft brewery, The Weeping Radish in Durham, and they didn’t make my beloved British and Belgian ales. NC, for me, was Beer Hell, and I moved West, at least in part, because I had read names like Rogue and Bert Grant and Boulder and Sierra Nevada and Deschutes and even the former incarnation of Red Hook and I wanted some. On the trip out – in a 28′ foot Ryder truck, towing an Toyota sedan – I stopped for the night in Laramie, Wyoming, and saw a bottle of Rogue Shakespeare Stout on the next table. I couldn’t order it fast enough. While waiting for it to arrive, I felt exactly like I did when I went to pick up my high school prom date and knocked on her family’s door. 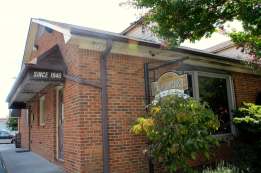 The venerable City Beverage Company, Winston-Salem, the only thing that kept me going in pre-craft North Carolina

Everything changed that night and I vividly remember thinking, “Damnit, WHY do I have to leave North Carolina to experience this?” On a trip back in 2000, it wasn’t much better. I ate at two restaurants in Durham and Greensboro and neither had any NC beers.

Today, I’m happy to say that all this has changed. NC has become a sort of smaller-gauge brewing behemoth; not on the scale of Washington, California, Oregon, or Colorado, but certainly one of the hottest states in the East for brewery start-ups and outfits that are actually piling up some history and serious cred.

The foremost of these is Highland Brewing Company, in Asheville. Highlands is also the oldest brewery in what is now the burgeoning Asheville brewery nexus, a thriving beer culture that’s becoming an established tourist draw for this remote, homey, picture-postcard little city in the bosom of the Blue Ridge Mountains. Highland also has the distinction (not really much of one but, hey…) of being the first of NC’s 200+ breweries to send a sample for The Pour Fool to review. It’s not like I haven’t flaunted this connection to my beloved NC. I’ve mentioned it about 150 times and no one took the bait until Highland contacted me recently and mailed a box containing a sample of their new Highland Brewing Company “Southern Sixer” IPA. As it happened, prompted by having one of their beers sitting in my fridge, I was able to taste a glass of their new summer-weight, Low-ABV IPA, “Daycation”, which I reviewed here recently. Daycation got me a bit, uh, excited, so I wrote it up before the Southern Sixer…and then instantly regretted it because it makes it look like I think Sixer is somehow not the Big Deal as is Daycation and that, my friends, is NOT the truth. 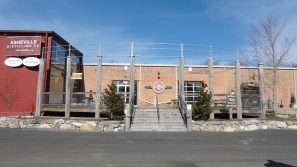 The term “Southern Sixer” describes a group of mountains in the Asheville area that are at least 6,000 feet in elevation. There are, to be precise, fifty-three of these peaks and they range across the Blue Ridge, Unaka, Great Balsam, Great Smoky, and Black Mountain ranges, all surrounding that tri-corner spot where Virginia, North Carolina, and Tennessee converge. Hillbillies like me, from all three states, take some significant pride in this magical little corner of the planet and Highland commemorated their mountain roots with a lovely, clear, fresh IPA using six hops varietals: Equinox, Mosaic, Columbus, Cascade, Chinook, and Simcoe. Reading this line-up was enough to get me interested, as I would drink water from a pothole if somebody infused it with Chinooks and Simcoes and the others are no slouches, either. 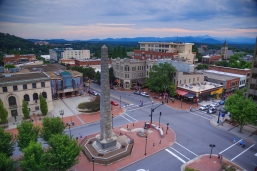 Asheville, NC: charm in any direction

Southern Sixer is built very much in the mold of the eastern/midwestern IPAs that roll much closer to the original English India Pales than do their rowdy cousins Out West. Here, smack in the middle of the world’s largest hops production, our IPAs are far more aggressive and bitter than their East/Midwest/NE/SE counterparts. Except for some notable exceptions like Heady Topper, Eastern IPAs are more malty and more balanced than our Western counterparts and, as I’m a proud PNW native for the past 26 years, my opinion of this beer is sawyed by. But I find that I enjoy beers in the style of Southern Sixer a LOT, these days, because I don’t, like many of my brethren up this way, fear malts. I LOVE me some malts and their inclusion in IPAs doesn’t, in any way, mute the eperience of the hops for me. Southern Sixer is beautifully malty and stealthily, elegantly hoppy. In effect, this style of IPA is roughly the equivalent of the Northwest Pale Ale in its bitterness level, and Sixer remins me, in fact, of a slightly less caramel-ish version of Deschutes Red Chair. The caramel and toasted grains and a distinct barley note drape themselves artfully across a solid ridgeline of citrus, floral, and herbal hops notes and nicely complement the pink grapefruit and faint spices on its lingering finish. The overall impression of this ale is that of well-honed expertise; a skill in the brewing that recalls Deschutes and AleSmith and Full Sail and Sierra Nevada and that stratum of breweries which have been around and gotten their act totally together.

The harmony of these six rock-ribbed hops lends this ale a substance and seamless drinkability that makes it a serious candidate for anyone who is in search of a sort of “house IPA” that can line your fridge and deliver immense pleasure every time you dip into your stocks. My last trip to NC was a mad, splash ‘n’ dash scamper that wound up in Knoxville and, at very least, earned me a Blackberry Farm Saison for my troubles but I plan to go back, ASAP, and spend some quality time in Highland’s airy, homey taproom, soaking up the national-class expertise and style of these ridiculously-fine beers. Highland is The Real Deal and anyone who skips them on a trip to NC is going to miss an essential American craft beer experience.  96 Points