AB has sunk its tentacles into yet another property designed to do absolutely NOTHING but gain them cred that they cannot earn for themselves and which they will now use to weaken and erode the solidarity and spirit of the American Indie Brewing community.

I posted this comment on Joe Tucker’s own post – the founder and owner of the seminal beer rating website, RateBeer.com – so I’m not going behind his back. This is what I wrote on the partnering of RateBeer with a division of Anheuser Busch…and this was me showing every bit of the restraint that I have in me…

“Joe, let me blunt, here: There is NO POSSIBLE WAY that you’re going to be able to rationalize this out and make it palatable for MOST of your users. You have just struck a deal with the Devil and NO amount of slick explanation is going to invalidate or blunt the simple FACT that you are now beholden to the very company that is making the most concerted effort – in fact, pretty much the ONLY concerted effort – to hamstring or destroy altogether this culture that has spawned your own personal success, that of the 5000 small, independent breweries that make up the Indie/Craft community, and the happiness and enjoyment we all have lived out for the past 25 years, in watching our beer horizons open wide and carry us up and out of the century+ morass of sameness and forced homogeneity of beer. 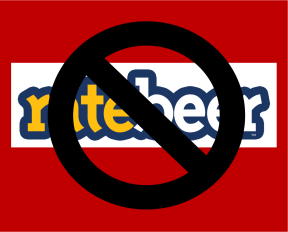 You looked at what the fact of what this decision would mean squarely in the eye and knew damned well what the consequences of this would be and did it anyway. Money is VERY persuasive, isn’t it? Wave enough of it in front of the average man and his eyes will glaze over and his head will swim with rosy fantasies and his values will slip just that fraction that allows the rats into the basement…from which they slowly take over the house. A rational person can only conclude that you had this offer, weighed it out, considered how mortally offended MOST Indie Beer fans would be and said “Fuck ’em.” If there’s another way to look at it, I can’t find it, and certainly, for the love of God, NOT in your attempted amelioration with such empty palliatives as ” proud of our accomplishments…” , “…helped so many small breweries and beer retailers receive the spotlight they deserved…” , “…so grateful for all the wonderful people, places and experiences that tending the site over these many years has provided us….” Blah, blah, blah. We’ve ALL read all this happy horseshit before, less than a month ago, when Wicked Weed took a dive for ca$h and the other dozen times before that when AB sunk its tentacles into yet another property designed to do absolutely NOTHING but gain them cred that they cannot earn for themselves and which they now use to weaken and erode the solidarity and spirit of the American Indie Brewing community.

For the past ten years, I’ve consciously favored RB scores and reviews and the site itself over BA, for its friendliness and openess and lack of the clubhouse mentailty that’s long infested BA. I’ve referred countless customers to RB and quoted you extensively in The Pour Fool and in other writing. That’s all DONE. I don’t write or utter the word Ely***n, anymore, don’t mention 10 Barrel, ignore Devil’s Backbone altogether, and erase ANY sell-out to AB from everything I do because, once their independence is compromised, it’s just a simple fact that the intergrity and connection that made them great and appealing is gone. It CANNOT co-exist with the corporate values of ANY part of the AB/InBev empire. RateBeer, from this dayforward, disappears from any and all references I make to beer reference sites, ratings, and posts. You knew that, in some people’s eyes, this would be a death sentence for RB and you decided that was okay. So, here it is. DEAD. RIP RateBeer, long loved and QUICKLY compromised. And this response will be the next post in The Pour Fool. You asked for it, so cowboy up and take your lumps.

3 thoughts on “RateBeer Joins the Borg Collective: AB Harpoons Another One”