Most breweries come out the chute with something a bit less menacing, more crowd-pleasin’. But Deschutes, from Day One, held their company’s slogan, “Bravely Done”, in a octopus-like grip and have operated off that ideal ever since. They arguably have the country’s greatest American-style Imperial Stout – the immortal “The Abyss” – and they tinker with it constantly, gleefully, like a bunch of tweener kids who just found an erector set in the attic. They experiment annually on two of their primary IPAs, “Hop Trip” and “Fresh Squeezed”. They found a barrel of their absolute iconic Winter ale, “Jubelale”, half buried in a snowdrift, after some would-be thieves broke into the brewery and drastically under-estimated the weight of a full 15.1 gallon steel cask, and turned that little disaster into a series of Jubel ice-ale releases, with a crazily high octane version of Jubelale that tastes like Jubelale, only waaaaaay Moreso. 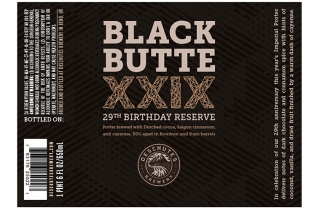 And that flagship beer? They’ve now issued twenty-nine of their annual Frankenstein-ish permutations of the basic Black Butte – unquestionably one of the nation’s top two or three bottles of Porter – and each one has been a virtual mad-scientist monkey-puzzle of “What if…?” In typical Deschutes fashion, each one of those wacky experiments has Worked – worked like a Trojan press-gang. 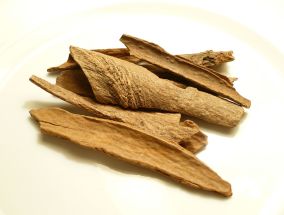 XXIX is, even in its fast-company lineage, is a fierce and brilliant animal. The first thing that clawed its way across my tongue was COLA!! Cola like chewing on a nut in the South American forest. Like Coke syrup dumped into the bright tank. And if that was the end of what exploded on my palate, you would not be reading this review right now. Cola is a fairly one-dimensional flavor. The difference between Coke and Pepsi and Dr. Pepper and Jones and all those other colas is what’s used to support that basic cola-nut earthiness. In Pepsi, it’s mainly vanilla. In Dr. Pepper, it’s fat, black cherries by the fistful. That’s how soda pop manufacturers set themselves apart from their competition. In Coca-Cola, that distinctive signature is cinnamon…and what’s the second primary additive in Black Butte XXIX, stated right there on the front label?  “Saigon cinnamon“. 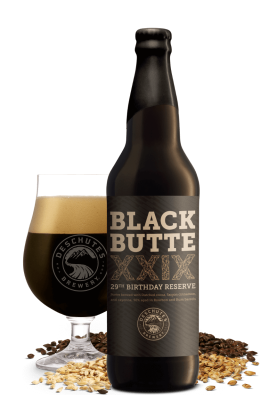 So, even though there is dead-zero cola added to BB29, that big blast of cinnamon is powerfully suggestive of Coke. But following that, as BB29 fans out elegantly on your taste buds and paints the inside of your mouth, the Dutched cocoa, and those Bourbon and Rum(!) barrels used to age this puppy announce themselves with an exotic clarity that shows up in the rum’s spice and brown sugar and subtle fruit notes, while the Bourbon comes in a small but firmly boozy wave that carries dark caramels, figs, smoke, brandied raisins, and roasted nut colors and the tiny miracle is that ALL of this is clear and assertive and unmistakable and requires no such thing as an “educated palate” to detect. It’s all there, in some flamboyant Conga line that undulates its way across your tongue and down your throat with an almost dismissive extravagance. Incidental flavors like coffee and leather and tar show up in hints and insinuations and a firm background of unsweet blackstrap molasses ties it all together. After finishing this bottle, I had an irrational urge for a cigarette…and I have never smoked once in my life. I’ve had actual sex that wasn’t as satisfying as this ale…but I want to make it clear that it was NOT with my wife!

I bumped a couple of posts to get this out there because I’m hoping that you’ll get some idea of what this experience will be and will rush right out there to find a bottle or twelve. It’s difficult but not impossible and, like all good things in life, the effort to nail down your own bottle of XXIX will be totally worth it. And, bear this in mind: if you are as blown away as I am by this stuff, next year will be edition THIRTY of this titanic ale and what sort of unGodly, indescribable, creative eruption will that thing be? I’m up for that challenge…