I’m not going to name the author of the following comment, since I did, for a long time, have a great deal of respect for him. But, recently, he sold out his business to AB/InBev and did that instant u-turn from passionate advocate for independent brewing to prevaricating douchebag who still wants to have all the fun and insider cred of any other member of the Indie/Craft brewing community, after selling a chunk of his business to a company that’s actively involved, on a daily basis, in trying to destroy or gain control of that community. He, like other D-Bag Converts like Joe Bissaca and Dave Buhler and Meg Gill and Tony Yannow and a handful of other FORMER Indie/Craft figures, now preach a suspiciously uniform Gospel of “It’s all about the beer!” and “Nothing has changed!” or, in the case of this guy, just tries to resume business as usual and incites Facebook discussions in which he insinuates frequent self-serving messages about inclusiveness and “a changing paradigm” and other utter shite designed to allow him to back slowly into the Craft Beer Tent. These folks are like that episode of friends in which Ross walks into the coffee house with an earring and tries to carry on a conversation, which Joey interrupts to say, “Don’t be talkin’ all normal-like when you’ve got that thing in your ear.” There is an almost opaque and obvious miasma of Sell-Out about these folks that they want DESPERATELY for us to ignore.

**NOTE** At the time, I didn’t name this guy because he was still running his business and I have never believed in ragging publicly (I ragged his sorry ass a TON, in private messages) on people trying to make a living. BUT…he finally sold out 100% to Ab/InBev, after secretly working with America’s Biggest Scoundrels for almost a year, prior to announcing their “partnership” in late 2017.

His name is Joe Tucker, founder of RateBeer, announced that his beer rating website has been fully acquired by ZX Ventures, a division of Anheuser-Busch InBev. 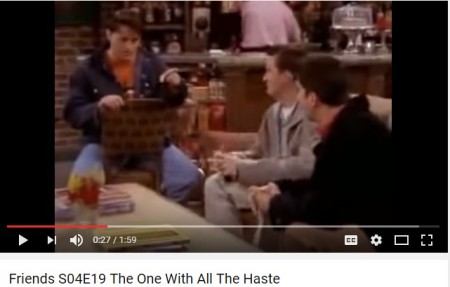 “Although those unfamiliar with industry realities of the last decade will continue to see a clear black and white world… the interesting truth is more nuanced, and for some of us, not a barrier to remaining passionate and committed to keeping the love of all beer alive. All the best to my friends at each of these breweries. #cantweallgetalong“

Here’s the bottom line and it doesn’t matter if any of these people like it, don’t like it, believe it, think it’s fair, or decide to pretend that what they did was all for the good of their business. It really doesn’t even matter if I like it or acknowledge it because I’m just one admittedly cranky geezer from Tacoma. It just IS, the way the sunrise and the race of clouds IS:

When you sell your business to the blatant, open, arrogantly dismissive enemy – and that is not too strong a word – of your own culture, you are no longer a member of that culture. That state persists until you unhook your little red wagon from that enemy. And even then, millions of us are going to remember what you did and may never forgive that.

This guy was attempting a (supposedly) clever sideways approach to suggesting that we should all just get past the scorn and derision being flung his way and realize that times change and that breweries selling all or part of their businesses to investors is just the normal evolution of Indie beer as its popularity booms. And he’s right about that. Yesterday’s news about Sapporo buying San Francisco icon Anchor Brewing was seen, by many people, as a disaster on a par with this guy’s selling out to AB/InBev. They are wrong. Sapporo, Kirin, Heineken, Duvel, and the other international breweries who have invested in American Craft, and conglomerates like Diageo and Constellation Brands, are, yes, competitive businesses which aggressively seek to succeed in the marketplace. But they are breweries FIRST and professional sellers of beverages FIRST and they understand and even honor a level playing field.  They make and sell beverages primarily and are not nursing some century+ corporate vendetta against everyone else in the marketplace. Their histories are not rife with scandal and subterfuge and thuggish backroom deals and tossing Americans out of work as they bought and shuttered breweries which dared to compete with them. They’re not lobbying state legislatures DAILY to gain market advantages and handicap Indie brewing.

By the time I woke up, yesterday, I had forty-three messages from people who expected me to go ballistic about Sapporo and Anchor. As the day went on, that number got very close to eighty. I didn’t explode and have no reason to. Sapporo is an honorable company which will be a good steward of Anchor’s grand history and respect its culture. Unlike so many craft fans, I studied economics in college and for a long time after. I know that Big will purchase Small and Promising, in all business categories. And what matters is WHY that company is buying that smaller one. In the case of Duvel, the great Belgian brewery, they became a partner and then owner of Brewery Ommegang almost from Day One. They later bought majority stakes in Firestone Walker and Boulevard Brewing. Both of these breweries are still very much honored parts of the American Craft Beer community. The blow-back has been a miniscule fraction of what it is with EVERY AB/InBev buy-out. Why? Because people DO understand that AB is a corporate thug and has been for its entire history. They advertise it – literally. Smug, dismissive Super Bowl ads that scoff at “Pumpkin Peach Ales” which, to their shock and surprise, was an ale being made by a Seattle brewery that they had acquired just months earlier. Another Super Bowl ad that painted a pretty and totally false portrait of their origins, as a product of a poor immigrant with a dream…who was actually a young opportunist who married a St. Louis girl whose father was filthy rich and owned a brewery. And any brewery or associated business which decides to take that sack o’ cash and allow AB yet another poisoned tentacle into our community instantly takes on that stink of corruption and cynicism.

My FB friend, here, can whine and posture and try whatever sneaky approaches to his status within this community all he likes. It’s still – for the moment, at least – a free country and I wouldn’t even dream of suggesting that he has no right to say whatever he believes will help his cause, but he, like the other AB Sell-Outs, has reached a point at which they feel that they’ve been punished enough and that we’re now all just being cruel and ungracious and that we should just Move On and let them back inside the tent. That, however, is not how reality works. They get to handle less criticism when we say they can handle less criticism. Their view of our manners is irrelevant. THEY sold out, THEY decided that pile of cash was more important than their inclusion in this marvelous culture, and THEY now SHOULD, if they have any sense and character, just own what they did and roll with the punches and realize that they’re Out and are not likely to come back.

As time goes by and our national atmosphere of intolerance and amorality and blasé attitudes about honor and ethics and loyalty and priorities shifts away from what made Craft Beer so joyous and compelling since it’s birth, it may come to pass that these greedheads WILL be reintegrated into the community of small, independent breweries. (With any grace at all, I will be dead before I have to watch that happen.) At very least, we are now faced with having to find a new category into which Firestone Walker and Lagunitas and Boulevard and Anchor and every other brewery that has corporate backing from reputable breweries or investors can be filed, because “small and independent”, that proudest claim of 95% of all American breweries, no longer applies. We don’t need to demonize people who care enough about their patrons and their culture that they find a respectful, honest partner with whom to grow. We can – and SHOULD – demonize AB/InBev and its sell-outs because they have openly and arrogantly flaunted their sleazy business practices for 120 years and have answered all challenges with “Hey, it’s just business!” or outright lies of the type which would even embarrass Donald Trump and the Republican Party.

When you lie down with dogs, you often get up with fleas. And, while I really love to lie down with my dogs, I at least wash ’em first. No amount of soap will ever wash the stink off AB/InBev…or those who lie down with them.