From the Incomparable McSweeny’s…

“I don’t know about you, but I can’t wait to get my hands on some fucking gourds and arrange them in a horn-shaped basket on my dining room table. That shit is going to look so seasonal. I’m about to head up to the attic right now to find that wicker fucker, dust it off, and jam it with an insanely ornate assortment of shellacked vegetables. When my guests come over it’s gonna be like, BLAMMO! Check out my shellacked decorative vegetables, assholes. Guess what season it is — fucking fall. There’s a nip in the air and my house is full of mutant fucking squash.”

It’s Autumn, Bitches! (“Bitches”, here, means guys. I don’t use “bitch” on women. Except for Ann Coulter. And Tomi Laren. And especially Kellyann Conway.) And, much as I dearly love McSweeny’s, gourds don’t really yank my chain the way certain other comestibles do. Most specifically, the singular sign of Autumn, at my house, is opening the fridge and seeing unrealistic quantities of Jubelale, sitting there…softly beckoning. Okay, so there’s a bunch of less important shit that has to come out of the fridge to make room for it – eggs and milk and yam flour noodles and butter and stuff – but I have several drastically-underused camping coolers and a good recipe for ice and anything worth having is worth abusing something to get. So, when my family and friends come over and open my large Whirlpool chilling apparatus, I stand there and smile and say, “BOOM! Check out my extravagant collection of the greatest seasonal ale ever made, assholes!”

And they grab a bottle and a glass (because, what are we anyway? Hippies?) and take a sip and another soul is assimilated into the Jubel Collective.

The very first Jubelale, from 1988, originally sold in 750ML version, the same size as wine bottles.

I’ve been drinking Jubelale ever since the second edition of it was released, back in the vacuous 1990s, and it was then and remains still the beer that I would choose about 99 times out of 100 when I just want to enjoy the sensual pleasure of consuming a perfect beer idea, perfectly made. And that one time out of that 100? That’s usually a time when I can’t get Jubelale because, defying all logic and reason, Deschutes Brewing sniffily insists on not making Jubelale year-round. (the lazy bastards) I’ve amassed cases of Jubel and nursed them along until summer, many times; even into September, in 2010. Yeah, yeah, HopHead fanatics will cringe at that and whimper than my hops had receded(!), but I Do Not Care. 97% of perfection is closer than anybody else is coming.

But writing about Jubelale…what a fucking chore this has become. What can I possibly say that I haven’t said in the, by actual count, twenty-three past reviews I’ve written of this wicked stuff? I’ve used almost every adjective in my head and maybe two dozen out of my thesaurus – with only the possible exceptions of “callipygous“, “orotund“, and “sybaritic” – and am now reduced almost to caveman-level ululations and febrile clutching of both paws.

And yet…here we are again.

The 2017 iteration of this stunning beer+ achievement is one of the three or four best I’ve tasted yet. Yeah, yeah, crap beers like BudMillerCoorsPabst are engineered to be exactly the same, batch after batch, forever. In craft brewing, beyond even the deliberate tweaks that never-satisfied brewers like Deschutes have as their virtual mantra, we’re talking about Mother Nature’s offerings, here, no matter how much they’ve been fooled with between field and brew tank. Hops are different, year to year, and grains are, too. There will be variations, even if the same exact recipe is slavishly followed every time. And my Deschutes Homies Don’ Play Dat. 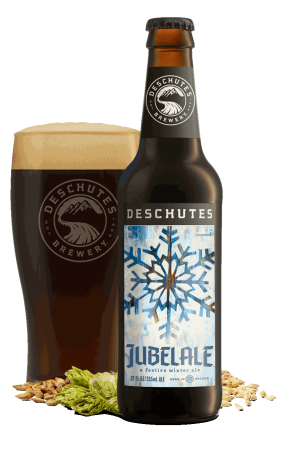 In transitioning from a malt-dominant winter warmer, as it was in the beginning, and into the quasi-IPA it has become, the road has not always been without potholes, despite the undeniable quality. Three years ago, I declined to review it, as I didn’t like the direction it was going. Turned out, I had gotten a shipment that suffered heat damage in transit. Tasted again…beautiful. But that WAS different from this ’17 and here’s how:

Jubel ’17 shows an even better integration of its hops than any of the past three to five “vintages”. Both ends of the flavor palate are broader and more vivid than the past few and the hops show more spice and florals than citrus or assertive resins. It’s a rounder and slightly fatter ale and goes down so deceptively easy that you can get yourself into a bit of peril, vis a vis driving or operating a backhoe or, yknow, like, talking, if you cave to the rather powerful impulse to consume the entire six-pack, something which will probably involve holding off your life partner with salad tongs or a cattle prod.

I’m a freakin’ luantic for autumn/winter seasonal ales and have been startled but not at all shocked to find that national sales figures consistently show that those sliding-into-cold weather brews are one of the three largest-selling categories in Indie beer. The reason is simple: they’re just friggin’ delicious. After a spring deluge of IPAs and a long, tedious, hot-weather slog through everybody’s summer or session IPAs, light lagers, precocious Low-ABV Pales, and the rather delightful and somewhat shocking emergence of the Gose and the quirky Berlinerweisse, getting back to drinking muscular, substantial ales is relief akin to a fat guy unbuckling his belt after a hour-long siege at the S&W Cafeteria.

Jubelale is the slam-dunk template for this style of ale. It’s warming – 6.7% ABV – and credibly satisfying and has never once, in its long and storied history, shown any gratuitous lapses in the rock-solid judgment Deschutes shows in the tweaks they do embrace. This is, for all intents and purposes, a Perfect Beer…and all you will need as proof of that statement is one bottle and one sip.  100+ Points

One thought on “Deschutes “Jubelale”: An Autumn Revelry, Bitches”