My main squeeze, the fabulous Judye, and I recently went down to the farthest northwest reaches of Arizona, a land notable mostly for scorpions and sand and dust and occasional flash thunderstorms that threaten to literally wash away whole houses, to visit her brother, Dan, and sister-in-law and niece. This wasn’t a working trip, for me, but I looked casually for breweries and wineries and somehow neglected to even think about any possible distilleries because…well, I just didn’t see an isolated town like Kingman, Arizona, being able to support one. We wound up really liking Kingman and its isolated culture and sense of community, and can’t wait to go back but, I admit, I started the trip feeling like a I was traveling to a way-station in the Gobi Desert.

Yeah, urban condescension: I’m Guilty. I looked at a lot of photos of Kingman and concluded that it was mainly a pit stop on I-40 between Los Angeles and Phoenix…which is sorta is but that, as usual, is not the whole story.

About two days into our stay, while planning a visit to the areas two wineries, my BiL, Dan, happened to mention that we should drop by “the rum place“, just out by the airport, about two blocks from where his wife, Marie, and daughter Melissa work. My antenna went straight up.

“They make whiskey?” I said, hopefully.

“Just rum and vodka, I believe,” Dan said, thinking, “Yep, that’s it. At least it was when I was last out there.”

My enthusiasm for distillery visits tends to cool just a scant tad if there is no whiskey involved. I said yeah, we should check it out but they wouldn’t be open anytime during our visit but just before we were due to drive back to Las Vegas and fly out.

So it was that, with no expectations at all, I wound up wandering into a handsome, Western-themed tasting room about 200 yards off the tarmac of Kingman’s “airport”, a place where large planes can land but usually don’t fly back out again. It’s an airplane graveyard, the main place in the Western US where decommissioned planes go to be disassembled, scrapped, and sold off for parts and metals. It was…eerie; a solid mile of empty, abandoned airplanes, none of them moving or being worked on, all lined up in a mild desert breeze, with sand pooling around their wheels. 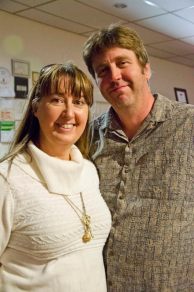 While our hostess was setting up our tasting, I did a little reading about what they call D3 Distillery: John Patt and his family started out in the beverage biz a couple of decades ago, while living in North Carolina. They grew grapes and dreamed of starting a winery but, as Patt chuckled, “That didn’t come to fruition.” They moved to Arizona, still thinking juice but John’s wife saw a notice for a distillery course and thought it sounded interesting. They went, fell for the idea, and, in 2009, started Desert Diamond. With the closure of the first booze maker in AZ, Three D is now AZ’s oldest distillery.

From the git-go, John Patt had some different ideas about how to make booze. For one thing, he starts not with sugar cane, which doesn’t grow in Northern Arizona,but with molasses, a choice which lends a richness and texture seldom found in Rums. He had some ready cash, so he ordered his new still from the best maker on the planet, Bavarian Holstein, of Markdorf, Germany. He also made it easy on himself and installed one of the country’s first semi-automated distilling systems. They now run four massive copper stills and business, despite being what would qualify as a semi-well-kept secret, is flourishing like the weeds in the drainage ditch beside my house.

I have probably made it sound, here, like nobody knows about Desert Diamond Distillery and that’s wildly inaccurate. These bottles have won a disproportionate fistful of medals at some of the most prestigious liquor competitions in the country; big-deal competitions like The SIP Awards and the San Francisco International Spirits Competition. The opinion of this distillery, the loud raving you’re about to read, is not just my opinion. Just in the half hour that we were there, a self-described liquor snob came in with his wife and friends and did a tasting whole we toured the facility. As we came out, the snobby guy was just picking his jaw up from the floor. “How…I mean, WHY…how come I’ve never hear of this place? This is astounding!” My own stunned moment came about five minutes later…

Gold Miner Vodka:  This is a light, vivid, rock-solid Vodka that’s rectified from base rum; a sorta ass-backward approach but one that gives this stuff various grace notes that non-botanical Vodkas rarely show. Notes of caramel – NOT a standard Vodka flavor – lurk in the background, just behind and enhancing a core of subtle spices, lavender, sweet herbs, and bitter orange. It absolutely is a Vodka you can just chill and sip and be happy with but, unlike many infused Vodkas, it doesn’t overwhelm your Bloody Mary or Screwdriver. It will be a wonderful mixer for when you want to add colors to a very fine Vodka. Is this, as their website claims, “one of the finest Vodkas you’ve ever tasted”? Maybe I wouldn’t go that far. For me, there is a small tier of Vodkas I would rank above it and those are not all botanicals. But as far as a traditional Vodka goes, Gold Miner is definitely in my all-time top ten.   95 Points 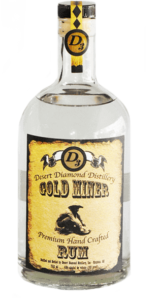 Gold Miner White Rum:   A subtle shot of vanilla, a suggestion of cream, a little floral character and an underlying stratum of faint caramels give Gold Miner White Rum a character that is conspicuously absent from about 99% of the White (unaged) spirits of any kind that I taste in an average year. If we’re being honest and not embracing our communal trendiness, most unaged spirits are just flat dullards; simpleton liquors that exist mainly to provide a more civilized and controllable octane for drinks in which it’s mixed than you can get from a bottle of grain alcohol. Most of the Whites I taste leave me wondering why the producer even bothered. I know the answer for most of ’em: cash flow. New distilleries cannot get a bottle of aged anything onto shelves and start making money for at least three years. Selling White Dog (the generic name for unaged Whiskeys) and a Vodka allows a new distillery to have some operating capital that’s not draining their cash reserves. The whole category is the essence of lowered expectations and most makers never go beyond that. Bravo to D3 for making something that has substance, flavor, and completeness.  92 Points 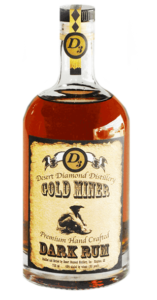 Gold Miner Dark Rum:   This, for me, is the knock-out of the D3 line-up. This certainly is a Rum. Tastes like rum, smells like Rum, looks like Rum or what we all wish Rum tasted, smelled and looked like every time. But it goes beyond that simplistic description. This feels and drinks like a very good bottle of top-shelf Bourbon Whiskey. Unlike with a lot of the everyday Rums we see on bar-backs and store shelves, Gold Miner Dark has a depth and richness and viscosity and complexity that gives it the gravitas of a luxury-tier Whiskey, making it problematic to even consider using it as a mere mixer. This stuff begs to be sipped slowly and meditatively, in front of a roaring fireplace, which is just about the opposite of the summer sun ‘n’ fun, Calypso Joe aura we attach to the concept of “Rum”. This elegant Dark has layers; strata of grace notes atop its core of wet oak and burnt sugar and roasted nuts and sweet spices. Along with its big brother, the 5-year old Reserve Rum, this 3-year old is not the coltish and under-realized potential that a 3 year-old Whiskey would be. This is grown up stuff,  replete and polished and ready NOW. And it may just be the single best American Rum I have ever tasted.  98 Points 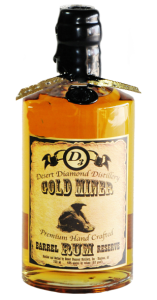 Gold Miner Reserve Rum: To imply that this is not as good as the younger brother in D3’s Dark Rum stable would be patently false. This IS a better Rum than the 3-year old Dark. But, to my tastes, the additional barrel time enhances the gorgeous wood character of these Rums and that is a bonus, if you like big barrel character in your beverages, but makes this more about the barrel than the younger version. The basic Rum that is the basis of both is SO distinctive and fulfilling that adding the increased oak mutes it a bit. But, Ooh Mama!, if you’re going to push the oak, push it just like this! The FAT cushion of dark caramels and vanilla and molasses and mint and cashew butter floats the barrel presence beautifully and delivers a massive intensity that never once edges over into simple burn or wince-inducing overload. This is an elegant beverage, by any standard. It’s impossibly rich and mouth-coating and ranges between sweetness and savory depth with effortless ease. Flavors continue to unfold as you drink it and it aerates more like a wine than a liquor, softening and expanding and revealing new grace notes the longer it sits in your glass. SIP. THIS…slowly and thoughtfully, and you may just experience Rum in a whole different way.  98 Points 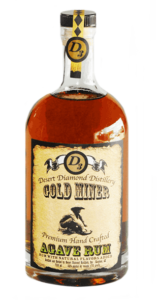 Gold Miner Agave Rum:  Dark with that magical cactus-cousin that makes Tequila such a bewitching, earthy, and atmospheric experience. The agave infusion just gilds the considerable lily of velvety Dark Rum with a peppery vegetal edge that elevates the whole and does it without seams and ragged edges. I honestly never suspected that agave and aged Rum would be this sympatico but it absolutely is, like a hand in a custom-made glove. But imagining this as simply what would come from adding a little tequila to an average Dark Rum would totally miss the mark. The Rum and the agave both present in a way that is startlingly pure and earthy and natural; like a great Dark Rum sipped through a mouthful of agave pulp. It’s an eye-popping combination that will change the way you think about Rum.  96 Points

Now…the Bad News. Due to Arizona’s medieval liquor laws, D3 can’t ship this stuff anywhere outside the state’s borders. This is all about money, of course: big corporate liquor interests forcing small producers to wear the strait-jacket of the three-tier system; a greed-driven contrivance that is designed to make the rich richer, stifle competition, and suppress small business people who might get any ideas about competing with your Jack Danielses and your Bacardis. The blanket justification for it, in EVERY state, is that restricting shipping keeps liquor out of the hands of minors but that is pure bullshit because all shippers require adult signature for recipients and won’t leave a package in a minor’s hands. Legislators in Nevada take pay-offs to deny small producers like D3 the ability to compete with corporate interests in liquor and that’s all there is to it. So, for you to sample these bottled miracles, you’ll have to be driving Route 66, know about D3, stop in, and physically drive the stuff home…or have a friend who’s doing that and will bring you some back. They are amply distributed within Arizona, and are handled by Young’s Market, which is a nation-wide fat cat in liquor distribution. You could try having a liquor store in your area that deals with Young’s special order a case but they sometimes balk at that. And there is also limited shipping available from the less-medieval state of Nevada, from Khoury’s Fine Wine and Spirits, in Las Vegas, (702) 435-9463.

If you don’t happen to have any legit reason to go to Kingman – and believe me, it is not near anything – you’re gonna have a hard damned time getting hold of Desert Diamond Distillery’s extravagant line-up of killer Rums…but, I promise you, the effort will be worth it.