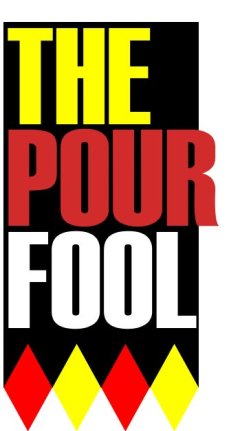 I bet you read that headline and thought this was going to be the first-ever negative review of a beverage in The Pour Fool’s history, right?

You could not possibly be more wrong.

But let’s sort out the concept of “Stout” for a moment.

“Stout” is not – not even remotely – one thing. Stouts come in different weights and different darknesses and different infusions and from different traditions. The Russian Imperial Stout, for instance, came from a commission by the royal court of Russia and Catherine The Great, who was very fond of brawny, high-gravity, aggressively hopped beers but had no domestic brewery capable of making what she wanted. Enter London’s Anchor Brewery and its brewmaster, Henry Thrale, who whupped up a 30-weight Porter (the term “stout” was not yet in use) which caused all of Catherine’s sleigh bells to ring at once. The beer was heavy, adamantly chocolaty, bitter as a mofo, and perfectly opaque.

That style – what we now call Russian Imperial Stout or Imperial Russian Stout or either of its two acronyms, RIS or IRS – is even more popular today than it was then. (The original recipe, shockingly, is still being made, now by Wells & Young, Ltd. of Bedford, UK., see left) It is, in fact, what most of us are thinking about when we either have daydreams or nightmares about Stout.

But brewers, far more than distillers or winemakers, are tinkerers. Beer is, very much and unapologetically, an engineered beverage. There are and always have been certain beer purists who passionately believe that beer is water, yeast, grains, and hops, PERIOD, but their numbers have been eroded by the undeniable success of all those beers that do not hew to that strait-jacket thinking, until they now come off as a quaint anachronism, akin to old geezers who sit and bitch fecklessly about “those danged computer contraptions”.

In short, NOT just one thing.

The whole idea of Cocoa or Chocolate Stout has become a very popular trend and chocolates used in all dark beers are so commonplace as to be routine, here in 2018. But, in most cases, the Chocolate/Cocoa Stout has tended to be overtly sweet and consumers have taken to the idea every bit as enthusiastically as they have to Chocolate Everything Else…which, at this point includes chocolate-dipped bacon, chocolate hot peppers, roses, potato chips, seaweed, radishes, bananas and plantains, Red Vines, avocado slices, churros, onions(!), squid, and various insects, including grasshoppers, crickets, meal worms, and scorpions(!)(?). No freakin’ way beer was going to escape. And yet…

Chocolate is one of the primary flavors in any Stout because it is very much a natural result of the roasting process that converts raw grains into dark grains, such as the chocolate malt and black malt that are the two workhorses of Stout production. These dark-roasted barleys are bursting with chocolate flavor, along with the char and roast, tar, licorice, and molasses notes. Chocolate suggests sweetness. In certain beers, your brain will supply a touch of sweetness, even if the brewer has mostly gone for a dry style. 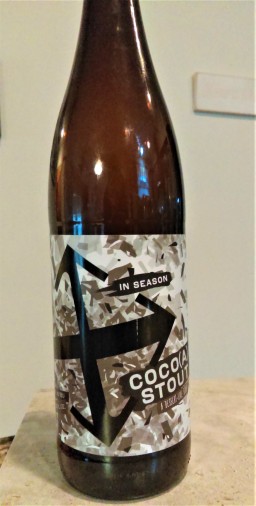 That’s the case with this flat-damned dazzling new Crux Fermentation Project Coco(a) Stout. Their promotional materials do nothing to dispel the idea that this is going to be a dessert beer.  Check the sweetness triggers from the PR sheet: “This triple-chocolate stout is the adult’s answer to hot cocoa on a cold night. As smooth and full of character as a fireside velvet painting, this roasted revelation was brewed with chocolate malt, infused with cocoa powder, and then ‘dry-hopped’ with cocoa nibs, vanilla beans, and toasted coconut for a decadently layered sipping experience that beats any dessert!…”

Does that hit you as sweet? You betcha. But there’s a problem…

This stuff is actually barely sweet at all.

There is a strong suggestion of sweetness; a sort of button-pushing intimation of the sort of icky, excessive sweetness that you’d actually find in a deliberately sweet Stout. Those things are around, all over the place. One of the most popular, in fact, is from a brewery that I DEARLY love, Southern Tier Brewing, of Lakewood, New York, a flat-out brilliant brewery that has been, for maybe eight years, the automatic response to anyone who contacts me to ask for my vote for worst American-made craft ale. “Creme Brulee” is what ISIS would make me drink if they wanted me to divulge state secrets. It is gaggy sweet; ridiculously, astronomically sweet. It does not deliver on iota any more chocolate or vanilla or coconut than does this Crux creation but it does less with maybe 10X more sugar.

Coco(a) delivers each of its infusions distinctly; not giving one atom less presence to that lovely coconut on the finish than to the layers of chocolate nibs and cocoa on the front of palate but it employs the natural, unsweetened versions of those additives. The cocoa is NOT Swiss Miss Hot Cocoa mix. It’s more like Perignotti or Valrhona powders that supply the chocolate octane and let you work out your own sugar fix. The nibs are dark, semi-sweet chocolate. The apparent aim, here, is to emulate one of those decadent, triple chocolate desserts that ooze when sliced and artfully combine bitter or bittersweet chocolates with sweet pastry. I’m sitting and sipping this ale while I write this and the sweetness of it is there but so beautifully restrained that even people who are grossed out by sweet beers – as is my wife, who shoves her glass back across our kitchen counter at me about 40% of the time, saying, “Ewwww, too sweet!” – will probably find this beer just about perfect as it more than delivers the Chocolate Overdose, while eschewing the sugar buzz.

There is a flattering and absolutely appropriate touch of bitterness on the finish so, despite the thing about being dry-hopped with nibs and beans and coconut, some hops also fell into as tank and, hey, just the right ones, too. 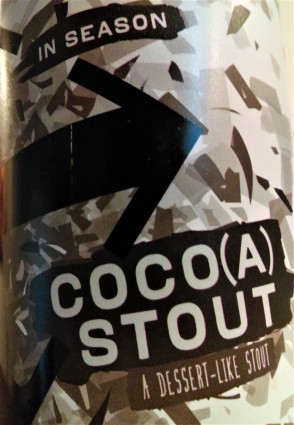 The texture is as purely decadent as the PR sheet claims. All things considered, this beautiful new take on PNW Stout reminds me a LOT more of one of my three favorite Stouts in any style, Lost Abbey “Serpent”, than any of your Bourbon Countys or Abraxases or Abysses or Yetis that rely on notable sugar content to get the message across. This is not a criticism of any of those Stouts but ales like Serpent and Coco(a) are the blessed relief from those sweeter styles, some of which (not the ones mentioned) exist mainly because they are easier to make.

This beautiful Stout falls much more into the same continuum of ales as crafted by Crux brewmaster, Larry Sidor, as his Black Butte Anniversary series and Obsidian from Deschutes and Crux’s own Tough Love. It is, in my opinion, an immediate addition to my list of the best five or six American Stouts I’ve ever tasted and is FAR more of a versatile, all-around American-style Stout than what its name and product description would suggest. If you buy this expecting the exact same experience of “hot cocoa on a cold night“, you’re not gonna get that, unless you make your own cocoa, using a VERY fine Dutch-process powder and maybe a teaspoon of sugar for the whole batch. I’d compare it more to a lovely bittersweet chocolate truffle, melted and stirred into a pint of world-class Stout. It definitely alters, a bit, the expectations created by “a decadently layered sipping experience that beats any dessert“. Coco(a) is a beer that is a damned-site better than about 99% of all the desserts I’ve enjoyed in My Life as a Sugar Fiend and I’m willing to bet it will hit you much the same way.  100 Points