“Someday The List will be used as a high school history text book and those students are going to think “what the F@#$.” Honestly, I think that too.” –  Samantha Bee

When the current shoddy, trailer-trashy episode of debasement of America and every principle that ever allowed us to say, with a straight face, “America is the greatest nation on earth!” is over – and it will be over soon – you and I and a lot of people are going to owe Amy Siskind a bottle of Scotch…or a fruit basket or a day spent walking her dogs…or something. Why? If you still don’t know the name, let me enlighten you…

This able, motivated, outraged  journalist (and now author), a former financial executive at Morgan Stanley, took it upon herself – when no one else seemed to even find it very important – to catalog and compile and organize every twisted, perverted, wildly abnormal daily atrocity committed by the Russian sell-out, con-artist, and narcissistic bully who’s now squatting in OUR White House. Every day since Trump’s “election” in November of 2016, Ms. Siskind has dutifully and exhaustively recorded all the ways in which this titanic abandonment of our democratic principles has been perpetrated and all of the relentless attempts at misdirection and obfuscation that congressional Republicans and the Trump “administration” have used to try to distract us all from the totality of their crimes and vile stratagems. Her efforts started as a daily online journal of numbered “Non-Normal” actions and events and gathered a momentum, among those determined to never lose track of the very real and escalating damage being done to our country, and finally assumed a sort of life of their own. Bloomsbury Publishing recently released “The List” as a printed book (it was originally an eBook) and it has taken off like a 4th of July skyrocket, stores and even Amazon selling out and reprints already underway. 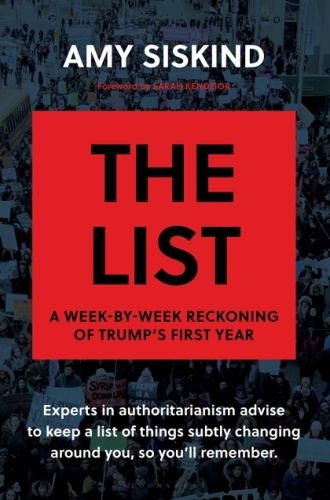 I got a copy a few weeks back and, like a novelization of a movie I’ve already watched two or three times, I know what the story is and how it has come out. Amy Siskind is continuing to compile these daily outrages and will keep doing it, I guess, until Trump is either dead or gone and we have taken our democracy back but the book focuses on his first complete year in office…and it is one of the most frightening and enraging reads I have ever held in two hands.

The items are staggering, both taken individually or as a whole. It’s the same feeling as for me, a devout animal lover, watching a bull in the arena being gradually bled to death by repeated small wounds from the bandillera, none of which alone would kill it, but cumulatively eventually drain the life force out of the animal.

I am so appalled and heart-broken, just reading the pages of “The List”, that I have to put if down frequently, go outside, cuddle my dogs, listen to music, cook, walk, breathe…do something, in short, that affirms life and relieves a pressure in my soul and spirit that I really have not – ever– experienced before. I’ve lost family members, my Mom and Dad, my beloved grandmother, cousins, friends, my sweet old Boxer dog, Edgar, so I know what loss feels like. But this is a different kind of loss. With all those literal deaths, it was a particularly difficult part of life but a part of life, nonetheless. Expected, maybe even predictable, and we are all forced, as a part of our human compact, to deal with the eventuality.

This is different. We do not expect American democracy to end, at least not in our own lifetimes. Evolve, yes, certainly. That process has really never stopped, in our entire history, and we can all see the truth of that if we can just step back, for a moment, and take in the Big Picture of America. What we did not expect to happen is a concerted effort to fundamentally corrupt and debase our bedrock principles, destroy every step of our evolution that has resulted in equal treatment for all, undo humane dealings with our disadvantaged and elderly, reverse every advancement in our growth as a culture, and totally abandon our reverence for The Constitution, The Bill of Rights, and our fundamental systems.

That is the jarring and rage-kindling part: this is being done deliberately and we have done precious little to stop it, in practical terms. Where is the outrage? Where is the refusal to lay down? Where is the massive, concerted effort to say, “This WILL not stand!”

The seeds of that are in this book.

As much as I stand in awe of what Amy Siskind has achieved with her grit and determination that what we define as “normal” in America is not forgotten, that is not half the intensity of the sympathy I feel for what has been the human cost to her, one smart, capable, iron-willed citizen who has waded in this sea of muck and perversion, so that we don’t have to. Occasionally, the inner woman pops out, as in a Tweet from today, in which she says, wistfully, “The woman sitting next to me on Amtrak is drinking vodka and snoring. I’m sober, working on the weekly list and jealous.” This is not some Messianic pose and she is not auditioning for a remake of Joan of Arc. Amy Siskind volunteered herself to take this on and then refused to capitulate to outside forces who have sought – and still do, daily – to tear down her List and her credibility. She is not possessed of some Divine force-field that shields the fabric of her soul from the sheer filthiness of the abuses she catalogs. It hits her right in the gut, in her moral fiber, undoubtedly erodes her spirit, as it does with mine, which is nowhere near her level of immersion, but she goes to that hateful place, every single day, and she does…not…give…in.

BUY THIS BOOK. Read it. Think about it. Get MAD. Get motivated. Get a plan for how YOU can help. It’s only a book, I know some of you will say…but it is SO much more than that. It’s a roadmap…and the road it lays out is not easy.

What’ll it be, Amy? Bottle of Laphroaig? Year’s subscription to your local produce delivery? Unlimited Haagen Dazs coupons? Spa days for Arleen and Shep? It has to be something commensurate with the effort you put forth to leave your knife marks along our trail back to sanity and self-respect and decency. I fear, though, that even the combined efforts of us all, filling your flat with dog toys until you’d have to find Arleen and Shep with a GPS tracker, would never balance the karmic scales.

Let’s be honest, here, and let me stop being glib for a second: what she has done in this book is nothing less than taking a bullet for a friend. It costs her when she has to put all this down on her laptop and read it back and have the words and their meaning penetrate. It costs us all to see it happening. It is a degree of shame and loss and revulsion that we may all spend the rest of our lives trying to fix, all because some greedy pusbags managed to hoodwink enough stupid people to get their greasy hands on the levers of this country and steal as much as they could within a window of history that they know damned well cannot sustain itself for more than a relative moment. We watch this parade of rats scurrying off their sinking ship and realize the enormity of the mess they’ve already created and which gets worse with ever passing second. And it is intended, in their vile strategies, to confuse and disarm us, only something like this, like Amy’s formidable, horrible, astounding List maintains our clear focus and resolve enough to say, “We were battered by this storm but we can rebuild and reclaim our country and our lives.”

Amy Siskind came along at a time in my life when we needed someone to throw themselves on a grenade…and she did just that.

Thanks, Amy…more than I can tell you.