When Josh pFriem, Ken Whiteman and Rudy Kellner cooked up the vision of a new brewery in Hood River, Oregon, back in 2011, they had a notion – because of Josh’s extensive experience as an assistant (most notably with the legendary Chuckanut Brewing of Bellingham, WA, and its brewmaster emeritus, Wil Kemper) and a frankly wonky immersion in All Things Fermentable – that this new venture just might be pretty good. They were certainly optimistic, as proven by the unusually handsome and adaptable digs down at Hood River’s new Waterfront Park Business Center, and by the measure-twice-cut-once thoroughness of their planning. Unlike so many – maybe the majority of – new breweries, pFriem was planned for success.

Great brewing skills + solid, forward-thinking business plan = iconic brewery. Not always but you certainly maximize your chances of hitting one out of the park if you have the prefect stance.

But I don’t think anyone was expecting what has happened to pFriem Family Brewers in less than six years. Arguably, in fact, the massive success of this astounding new brewery happened in less than five years. They’ve received a shocking 60+ different awards for brewing excellence in that time, and were my own Best of The Northwest Brewery of The Year for 2016. They were the New School’s Oregon Brewery of The Year in 2015, 2016, and 2017. They were Brewery of  The Year at The Oregon Beer Awards for 2016 and 2018. And their profile is not just regional. In 2017, Forbes Magazine named them one of the 15 Best American Craft Breweries.

I recently got a shipment of three beers from Josh and crew and, even before I opened the box, I knew they would be excellent because the worst beer I have ever tasted from Josh pFriem was excellent. I once tasted the pFriem Pilsner – arguably my least favorite style of beer, not because it’s not capable of greatness but due to how incredibly badly it’s been abused for the past 120+ years in America – in a straight A/B tasting with what I had previously thought of as the pinnacle of US Pilsners…Chuckanut Pilsner. In that blind tasting, I chose the pFriem over the beer from his old mentor, someone whom I think of as unable to do anything wrong. It was very close but, when I pulled off the bags, it really was not a shock. THAT is how stunningly elevated the level of achievement at pFriem has become.

In that box were the pFriem Select Saison – just their baseline Saison, not anything especially envelope-pushing or infused or barreled – and bottles of their Bright Pale Ale and Helles. ALL were…well, perfect. I mean that literally: Perfect. Here’s the Oxford English Dictionary definition of that word: “having all the required or desirable elements, qualities, or characteristics; as good as it is possible to be, absolute; complete“.

The pFriem Saison is the best unadorned, un-fiddled-with, stylistically true Saison from an American brewer that I have ever tasted. It shows, as their website notes, “aromas of guava, (and) it brings a taste of resin and kumquats“. I also got a dash of brett-like funk (no brettanomyces was used in the brewing), some grassy notes, hints of pear cider, and, of course, a nice, flattering finish of elevated hops. (This is the Pacific Northwest, after all, and Josh would like it if people, like, y’know, drink the beers.) The feel of the beer is absolutely what you get from drinking an authentic Belgian Farmhouse ale. It’s got the chunky foam, the slightly ciderish aromatics, and the lightness on the tongue but with whoppin’ flavors; bold, assertive, clearly defined flavors that are the certain hallmark of a brewer who knows what putting this thing with that other thing and some of that stuff over yonder adds up to. There is, unavoidably, some element of chance to making a beer from yeasts that are prone to doing their own Thang but pFriem seems to navigate those murky waters as well as any brewery currently producing Belgian-style ales. If a friend asked you, “So, what does an American-made Saison taste like, anyway?“, you could easily and confidently just hand them a bottle of this and all questions will be answered. 100 Points 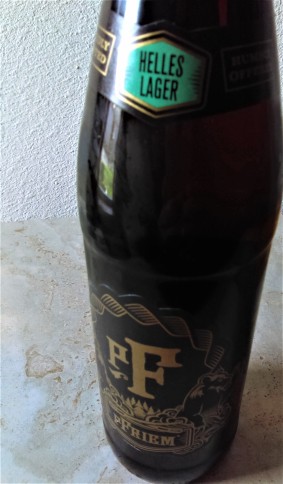 The pFriem Helles was my biggest shock in the box. I confess to having never tasted it and was expecting something far more on the order of the Helles lagers I’ve been sent for sampling by craft breweries, rather than the stunning German Helles I’ve come to love. pFriem reminded me powerfully of the Weihenstephaner and Augustiner if those breweries made a Pacific Northwest collaboration beer. Again and authentically, the resins show up a tad more aggressively than in the real Munich beers but that’s what “authentic” means: true to the style, true to your own roots. As with the Augustiner, which I last had less than a week ago, the pFriem showed a distinct, warm, inviting blast of fresh-baked bread, a kiss of graham crackers, yellow apples, sultanas, and creamy honey. It is a purely delicious, complete, satisfying example of what might be described as history’s best over-reaction ever produced: the emphatic answer by the Munich brewing community to the rising popularity of Pilsners, back in the mid-19th century. Helles never gained the universal traction that Pilsners did, probably because no opportunistic German immigrant wound up in St. Louis, married the daughter of a brewery owner, and instructed his brewers to make a watered-down Pilsner recipe because “Americans don’t know beer, anyway.” Helles has always been a better example of Lager than Pilsner but Helles has that unfortunate name that made uptight Americans balk and so we have it resurrected, in these less judgmental times, by brewers who build on the literature to produce something that, in rare cases, even exceeds the style’s roots. pFriem Helles is as close to a perfect lager as has been produced yet in the Northwest and, quite possibly, in America.  100 Points

I tend to separate beers into three categories: Beers That I Admire But Would Not Necessarily Drink Regularly, Beers I Choose In Certain Moods, and Beers I Flat-Out Love. I’m blessed to live in a part of the country where the general level of brewing acumen is arguably as high as anywhere on the planet, so that last category has a TON more names in it than it would if I lived in, say, the Southeast or the Midwest. There’s a fourth category that is the smallest of all: Beers That I Run Out and Buy Repeatedly. I hate drinking the same beer more than once in a given month and rarely do it. But, lately, that list has grown considerably too. Crux Fermentation Project’s new “Play Wave” is the newest addition, along with Reuben’s Brews “The Daily Pale”, Fort George Brewing’s “The Optimist” IPA, NoLi Brewhouse’s classic “Spin Cycle”, Sound Brewery’s immortal “Monk’s Indiscretion”, Great Notion Brewing’s “Juice Box”, and pFfriem’s own new-ish “Juicy”. Now, there another one, which may well wind up being the one I spend the most on, this year: Pfriem Family Brewers “Bright Pale Ale”. 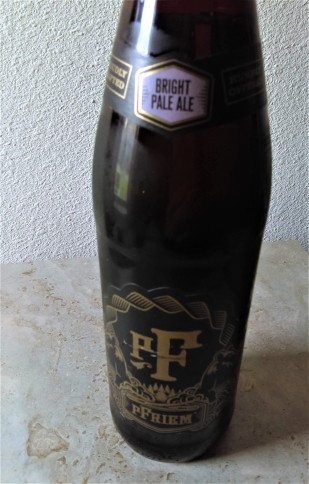 pFriem BPA falls neatly into and between two of the ales on that list that I drink most often and most avidly. It shows the clarity and easy approachability of “The Optimist” and Reuben’s “Daily Pale” but stops short of the resin muscle of either. It delivers the compulsive drinkability of the new “Play Wave” but shows more hops. That pocket – lovely, silken malts, expertly balanced with crisp floral-citrus hops and a firm intensity – may well be the place where the emerging Northwest Pale Ale comes to live and pFriem has made a case for this Bright Pale as one of the landmark guideposts for the style. The refreshment quotient of this ale is off the charts. It doesn’t deliver the mind-blowing complexity of “Monk’s Indiscretion” or the brawny malts of the “Spin Cycle” but is a better warm-weather choice than either. And, it is  certainly possible to make a case for the idea – for more casual beer fans, as opposed to cranks like me who drink Stouts and Barleywines all summer – that complexity and body aren’t the point in a Spring-into-Summer Seasonal.

pFriem Bright Pale Ale gushes apples and pears and multi-grain toast and hay and quince and citrus fruits and passion fruit and pineapple and pine resins, with glass-smooth texture and feather-light mouthfeel. The finish is clean but persistent, devolving into a pleasant hint of spices and apples. Of the three beers mentioned here, BPA promises to wear best, in the long run. Alas, though, that “long run” is spring and then it’s gone. For those whose spring tastes run to clean, unadorned, full-frontal refreshment and that signature shot of forward, Northwest-y hops, this is one ale you miss at the peril of your 2018 craft beer experience.  100 Points

Take-Away: pFriem Family Brewers is killin’ it. If they are not, in fact, the best brewery in this region, they are, at very least, on a ridiculously short list of maybe three or four. No visit to the Portland area, or really even Oregon in general, is a complete beer experience without a leisurely, incredibly scenic drive down the breath-taking Columbia Gorge, out I-84, to pFriem’s homey, elegantly minimalist pub, there on the banks of the mighty Columbia River. They have to be in any conversation of America’s top breweries, old or new, and it’s entirely possible that they haven’t even really hit their stride yet.

2 thoughts on “pFriem Family Brewers: From 0 to 100 in Just Six Years”