In the burgeoning universe of sour beers, there are some that just suggest sour and some that are almost indistinguishable from those odd drinking vinegars that have been nibbling around the edges of our beverage consciousness for the past five years or so. Breweries have tended to blur the lines between these styles a bit, as their aesthetics dictate but, in general, beer fans are becoming savvy enough about Euro styles to appreciate that a Gose or a Berlinerweisse are going to land on the tart end of the scale and present less of a challenge for sour beer newbies. But, past that, navigating the murky waters of what may actually be too sour for your tastes is a crapshoot, at best.

So, let me send you in a very friendly, very elegant direction that will give you a little introduction to the sour ale world without all the wincing and gagging that – admit it – you’ve been worrying about. 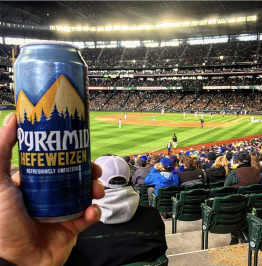 Pyramid Brewing has been a fixture of the West Coast beer scene for a LONG damned time, now, and even up here, a lot of people thought they knew the book on this persistent, resilient bunch. I did. Just two years ago, I paid Pyramid little attention at all unless I was at a Mariners game and stopped in for a pre-funk beer. That’s what we all knew about Pyramid: solid, unexciting, somewhat predictable, safe, unchallenging. Always drinkable. You’d order one in a pinch and do it happily enough. Good? Yes. Stimulating? Not so much.

Then, about 18 months ago, Pyramid sent me a couple of beers. I shrugged and tasted them and…Oh, My God!, what a freakin’ shock. Those two were Railroad Avenue Porter and Triangulate Pale Ale. They were…stunning. STUNNING. Both among the best examples of those styles made by anybody in this region in 2016/17. That was followed by several other new beers, all hitting at or near that same qualitative bar. I – and a LOT of people – started to sit up and bark a bit when Pyramid released new beers. I spent a wonderful afternoon talking and tasting with the Seattle Head Brewer, Kim Brusco. Again, startling.

Now, Pyramid has crossed that line into the weird and wonderful world of sours and, as figures, they’ve done it according to that same, new, elevated standard. 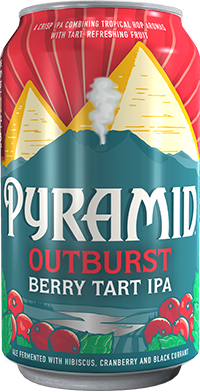 Pyramid “Outburst” Berry Tart IPA sorta, impossibly, stakes out a little bit o’ untrampled turf in the international sour scene. It’s infused with fresh cranberries and retains that sort of sour, astringent feel you get from eating a ripe berry. That is relieved just a bit by a fat addition of hibiscus flowers, imparting a gorgeous, subtle pink hue that blends with the grain-derived amber to give this beer a lush, sexy orange-ish tone. The final addition is black currants, providing a mellow, sweet bottom end that rounds out the whole and balances beautifully with the sour. It is frankly and unmistakably sour but in as friendly a way as I’ve tasted in any current ale. The balance of flavors is exceptional. I’m not a cranberry person but, in this ale, the cranberry presence makes this profile sing.

Pyramid’s new – and, HOORAY!, year-round – Berry Tart IPA is a total success in every sense and could it possibly pave the way for some other explorations of sour ales? Flanders Bruin or Red, maybe?

The knock on Pyramid (and it’s entirely possible that they may not appreciate my saying this) has been that they’re too tame, too safe, too much coloring inside the lines to ever woo beer fans who Walk On The Wild Side. That seems to have changed, at least a bit. Here’s one fan’s fervent wish that this is just the start of a trend.