A short word on Process: A great writer, whose name you very well might know, once told me that 90% of writing is just knowing what Point you want to make. So, each time I taste something that wanders out past my expectations, I get a little befuddled. Most of the time, it lasts a day or two and then phrases, similes, comparisons begin to creep into my head. When the thing falls pretty far afield, it sometimes takes longer.

This is one of those.

I probably owe Stone Brewing an apology. This may be too late to do them any good, in terms of immediate sales. Another probability: it’s likely to not matter. This is, after all, STONE Brewing we’re talking about – not to be confused with KeySTONE Light, as the owners of Keystone desperately hope you are – and if they are not, in fact, the nation’s preeminent craft brewery, they are inarguably in the Top Five. I’m going to assume that 90% of this (if not all) is already in America’s bellies. But I fervently hope they’ll make this beer again and, whether you realize it or not..so do you.

I get an IPA for review and I think I can be forgiven for having a general idea, before even opening it, what that ale is going to be about. The exceptions to those presumptions are freakin’ few and far between; maybe one in every 200 IPAs or so break ANY new ground.

Here, Stone has introduced a new process, as opposed to some new, revelatory hops hybrid. If this is any indication of what the use of new hop extracts from John I. Haas Company – made by a process called Incognito™ – is going to mean to the creation of the rapidly evolving American IPA, I suspect we’re not going to need any widescreen stylistic innovations for a while because this right here is SUCH a game-changer.

There is an indefinable Something about a truly great beer – or anything else, really. It’s a sense of completeness, of nothing left to wish for, nothing to criticize. Some breweries have it in most or even all of their beers. I’m fortunate enough to live in a region in which we have maybe a dozen of those: Reuben’s Brews, Holy Mountain Brewing, Deschutes Brewery, Logsdon Family Farmhouse Ales, Fort George Brewing, Chuckanut Brewery and Kitchen, and especially (OMG!) pFriem Family Brewers of Hood River, Oregon. Just taste across any of these and you will not find ONE…SINGLE…clunker.

NONE of these breweries has made an IPA like this. 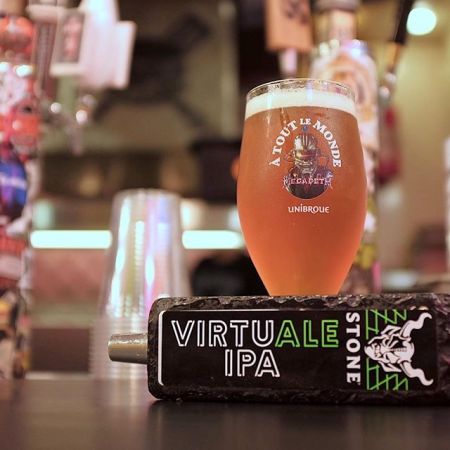 Stone VirtuAle is the product of a new Haas process that separates the hop lupulin from its plant material and isolates each to allow a purity and subtlety of the essential resins and oils that give hops their magical ability to be counter and foil for the sweet malt contents of the ale it’s used in. Lupulin is, to the naked eye, a fine yellow powder that attaches to the underside of the hops “scales” (leaves) and are secreted by what are accurately described as “glands”, technically called glandular trichomes. These oils and resins from the trichomes are what gives hops their flavor, aroma, and bittering qualities. As is often the case in nature, the flower, leaves, and green matter are sort of a vehicle for these glands; their raison d’etre, you could say. In the Incognito process, these resins and oils are “washed” free of the plant material and suspended in a liquid form that eliminates most of the herbal notes often found in whole-cone hopping.

To be fair about this, many of us really like that herbal character, especially in fresh-hop ales, and would never want to completely lose that edgy, aggressively earthy set of flavors. But the purity of this hops expression, the (no exaggeration) astonishing clarity and purity of the resins, with all their complex and compelling flavor possibilities, gives this ale, yes, an emphatic and even assertive bitterness and (I hate this silly, squishy term) “dankness” but in a seamless, edgeless way that retains the IBU punch but scrapes off the rough edges. Newbies who might well balk at a 72 IBU India Pale will not, with Virtuale, because the bitterness sings rather than screams. That bitter herbal character – the purely vegetal, grating bitterness that used to be the universal by-product of that childish era when stacking up IBUs was the whole point of the IPA – was first addressed by the use of lupulin powders, dried harvesting of the trichomes, and that began the thinking that results in Incognito: How do we create the purest possible expression of what is really at the heart of these amazing flowers? 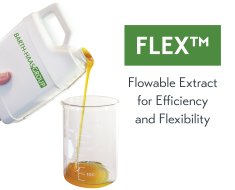 One of the previous John I. Haas liquid extracts, Flex.

This is a wildly and uncompromisingly complex ale. The flavors are distinctive. You will not have to guess at the flavors that Stone and I describe. Tropical fruit is all over the finish. A high, sweet, aromatic quality like the needles of spruce trees or the aroma of a pine forest pervades the whole profile. Something almost minty lurks deep in the background. Apricots and white peaches hum along under the citrus and mango and guava. These extracts are from Citra and Mosaic hops and this new process completely eliminates the major reservation I’ve had with Citra, ever since its splashy debut: a fat, all-pervading overlay of something almost like meat, maybe canned potted meat or something artificial. That aspect of the Citra is absent here. What’s left is the huge citrus notes, the Lemonheads candy and limeade and Minneola tangerine and pomelo that usually get masked out a bit by the meatiness. The softer Mosaic tosses the stone fruits into the mix, along with zingy mango and a flattering note of sweet herbs.

What does this add up to? I’ll refer you to the exact words that I said to The Fabulous Judye, two seconds after my first sip…

Stone VirtuAle is fu**ing delicious. (I cleaned that up in case anyone pulls a quote out of this) What sometimes gets lost, even for me, in this uber-geeky fixation with new chemistry and technology and horticulture is that the goal is to make things that make us go, “Mmmmmm!” when we drink them. Let’s be honest here: when that IBU Arms Race, that mad, adolescent scramble to pack the most IBUs into the confines of a 12 or 22 ounce bottle, was in its heyday, nobody did that as well as Stone, with the possible exception of Dogfish. But where Stone diverged so radically from the other breweries who were wandering The Dank Side was the fact that each one of those brutally aggressive ales was drinkable. There was zero gratuitous volleys of hops just for bitterness’ sake. They were complete beers; ales that you could drink and enjoy and still satisfy both your palate and your manhood. You could, in fact, even please your womanhood, too, because former brewmaster Mitch Steele (Now of New Realm Brewing, Atlanta) and the current successor-less brewing staff at Stone (now overseen by co-owners Steve Wagner and Greg Koch), never lost track of Job One: Make good stuff to drink, not just win style points.

In an era in which suspending undissolved solids in ales or packing amylase to defeat bitterness have become “breakthroughs“, here is a quantum leap forward that’s the product of ongoing innovation and technological advancement, the logical next step in the use of hops in beers and how best to make them perfect. This may not be a perfect ale but it is such a huge step forward that it took me this long to even figure out how to express it. Unless everybody at Stone loses their senses, we’ll see this ale again or something that refines the idea even further. Be watching for that and if you actually do see a bottle of this, buy it and drink it ASAP. It’s going to change the way you think about what the term “India Pale Ale” means.  99 Points

One thought on “Stone VirtuAle: The Most Significant Subtlety”