Learning how to say the word Gueuze is maybe the hardest part of learning about this quirky, exotic style of ale. Broken down into its phonetics, the pronunciation begins with one of those odd, half-swallowed syllables that comes out to “guh-YOOZ-eh”, with just a bare hint of that “eh” on the end, which is the proper Belgian way of saying it. But for purposes of our dumbed-down, non-Euro language facilities, saying “GOOZ-uh” works just fine.

That handled, a Gueuze is an ale blended from two or more lots of the Belgian ales called “Lambics”, which are sour fruit ales. You’ve seen the grandfather of all these Lambics in your local grocery store; maybe even tasted it before: Lindeman’s Kriek Lambic. It’s a tart cherry ale with fine, persistent bubbles and a dry, Champagne-like character. Lindeman’s also makes an unfruited Gueuze, a dandy creation called “Cuvée René”, which is the first example of a true Gueuze most Americans (and many Europeans) ever run into. It was my first and led to a torturous 30 year+ quest to find others like it, which was a real trick, even after I moved to Seattle in 1992, and was a flat impossibility in North Carolina, before I came West. 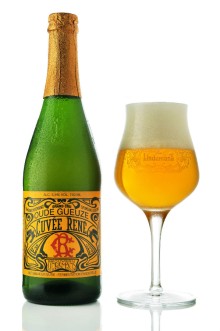 Gueuze is made by blending lots of barrel-aged Lambic ales, usually one that’s a couple to several years old, with one or two younger barrels to suit the brewer’s palate for what the blend will taste like. “…what the blend will taste like…” is an important qualifier, here, because the younger beers will still carry live yeasts and continue to change in the bottle. It’s why many of them are packaged in cork ‘n’ cage wire closures, like Champagne, because of the pressures of those expanding gasses. They’re ridiculously complex and intensely fascinating, to just the right liberal and exploratory palate, and I absolutely own one of those. I taste everything I can find which, in the past, was mostly Belgian Flanders. Today, there are several dozen American craft breweries that try their hand at Gueuze but the catch is that they have to have had a barrel program up and running for a few years, at least, to even have the aged lots to blend.

The world’s most popular Lambic

Okay, that’s yer quick primer…so…what do they taste like? Answer: like almost nothing else. You’ve probably had a sour ale of some sort. This is not that. Gueuze is to a simple, one-step lacto or brett sour as a Harley Davidson is to a Hot Wheels. The sour is usually as or more pronounced and some of the Euro versions, particularly, can be tough sledding for a novice drinker. And it should be said that, if you try a Gueuze or a lacto sour or a wild/brett ale or a mash sour like a Berlinerweisse or Gose (no relation) or the modern reinterpretation of the Kentucky Common*  and you don’t care for them, there is absolutely zero shame attached. Many, many people do NOT care for them at all. I live with one and she has as liberal a beer palate as I have ever come across but just is no friend of the Gueuze, no how no way. If any of your beer geek friends flips you some static turning them down, have ’em see me.

*(Kentucky Common is a style of beer originating in, yes, Kentucky, back around Prohibition, which was NOT really a sour. But today, as a sour mash ale, the name Kentucky – famous for that other sour mash, the one that starts Bourbon – has been appropriated and is now becoming a style of American sour mash ale to rival its German and Belgian cousins.)

The reason I’m writing what I’m about to write here is that the Gueuze is NOT really a very approachable style for craft newbies. It’s sour, folks, assertively sour and can be very funky and LOTS of people, trying to earn their Craft Beer Hipness merit badge, try one and make a face like someone sucking an underripe lemon.

But, at Deschutes, Job One has always been Drinkability. Deschutes beers may occasionally be almost slavishly authentic to their styles but they are always reined in just a bit from that style’s worst attributes. The Ages is a Gueuze that is made for that craft newcomer who has tasted and liked some Gose and Berlinerweisse and Lambics and is ready for the next step.

The Ages unfolds in layers of flavors, aromas, and textures. It starts with a surprisingly deft melange of yellow apple cider, pears, lemon peel, wet straw, and malt vinegar. It quickly reveals flavors of figs, gooseberries, quince, and sultanas but all on a very modest scale. A traditional Gueuze is a DRY ale; find bubbles, bready-yeasty character, little in the way of hops bitterness or floral/citrus, and almost no sweetness at all. That Lindeman’s “Cuvée René” actually has more in common with a Champagne or Cremant sparkling wine than with a traditional beer. It finishes almost totally dry and delivers the sour that rides atop the fruit hints and mostly overwhelms them.

The description above was for this Deschutes version. If you try the Lindeman’s first, it’s entirely possible you’ll find NO fruit notes and wind up wondering why this style exists at all. It’s a fair point. As with a lot of more adventurous foods and beverages, tastes vary widely. All I can tell you is that tale of my own house. I fell hard for Lambics and Gose and Berlinerweisse and especially the Gueuze the first time I tasted each of those. And The Ages is absolutely going to be your best bet – best I’ve ever come across, anyway – to find your way into this intriguing niche ale style. It’s sour but not off-putting. It shows some distinct fruit, which gives it a more user-friendly character than a traditional Belgian Gueuze. And it is relentlessly refreshing. That is, in fact, maybe the strongest appeal of all these different sours: they are just wildly thirst-quenching in warm weather. It’s not inaccurate to call them “mouth-watering”, as the acids in them produce that precise reaction as you sip them.

I had no idea at all that Deschutes was even thinking of making a real, authentic Gueuze before this landed on my doorstep. But if somebody had asked me which American breweries might do the best job of making one that would please a hard-core Euro Gueuze Freak, I would have named six breweries: Crux Fermentation Project of Bend, Oregon; Holy Mountain Brewing of Seattle; Jester King Brewing of Austin, Texas; Jolly Pumpkin Brewery of Traverse City, Michigan; Reuben’s Brews, also of Seattle; and Deschutes. Deschutes and Reuben’s may be a tad less inclined toward these styles of ale but both have among the most prodigious skill sets of any breweries in the country. It comes as NO surprise to me at all that The Ages is among the top two American Gueuze ales that I’ve tasted yet. This, along with “Duck Duck Gooze” from the venerable Tomme Arthur and his titanic The Lost Abbey of San Marcos, California, sets the standard for this style for all aspiring US breweries and both could even be slipped into Belgian bottles and, I believe, no one would be the wiser.

The Ages is one of the best ales of any style, from anybody, I’ve tasted yet in 2018. It’s not for everybody but for everybody who knows and loves the Gueuze…the nutshell is simply, “WOW!“.  98 Points

One thought on “Deschutes “The Ages: As in “One For…””