True Story: In the spring of 1992, my actress girlfriend and I, having worked at all the theaters we could reasonably travel to in the Southeast from our home in the Piedmont region of North Carolina, decided to take her sister and brother-in-law up on their kind offer (translation: “constant badgering”) of a temporary place to bunk in if we would move all the way across America to Bainbridge Island, Washington, just across Puget Sound from downtown Seattle. We had pets and two kids and a Toyota Camry and waaaay too much Stuff, so we hitched the car to a 28′ Ryder truck and set off across the map, as she was working at a theater in Mississippi and wouldn’t be able to join us until September. 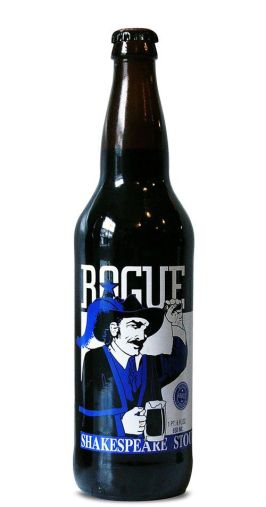 The trip took seven days and the clear highlight of it, for me, was a dinner stop we made in Laramie, Wyoming, where I looked across the aisle to the next table and saw something I had read about for years but had barely hoped to ever see: a 22 ounce bottle of Rogue Shakespeare Stout, standing there in the cloying air, glistening like a starlet’s eye shadow. “I want one of those!” I told the waiter. When it arrived, it was like the universe opening up and saying, “See? There is SO much more for you to discover.”

North Carolina, back then, had ONE craft brewery: The Weeping Radish, in downtown Durham, and they made German beers ONLY. In my NC beer universe, there were only watery trash lagers – the BudMillerCoorsPabst continuum – and imported beers, mostly British and Scottish tradition ales. I read beer magazines constantly but had managed to get hold of exactly ONE American craft beer: Anchor Brewing Porter. No Stouts, no IPAs, no Belgian-style anything. And not a great selection of British ales.

Seeing the Rogue was like walking into a forest glen and finding a unicorn. In Ontario, Oregon, two nights later, I had a Bert Grant’s Scottish ale. The next night, in Portland, I walked across the street to a supermarket and found a Boulder Brewing “Hazed and Infused“. I was in Heaven…and after arriving in Seattle, it just got better and better.

and The Rogue Nation, Everywhere

Rogue Brewing was the clear Northwest Top Dawg, back in 1992. That GLORIOUS Stout (it still is!), Dead Guy Ale, with its bald-faced introduction to Northwest Irony, Yellow Snow, Juniper Pale Ale…stuff nobody else was doing or, at least, nowhere near as well was very much the Rogue Thang; a virtual pocket philosophy.

When the late Jack Joyce and and his two other pals from Nike’s management team – Rob Strasser and  Bob Woodell – caught the homebrewing bug and started making the original recipes, it was located in Ashland, Oregon, home of the wonderful Oregon Shakespeare Festival…which lent its name to that magical Stout. They later moved to a large fishery facility in coastal Newport, which has been the nexus of what they call “Rogue Nation” ever since. For a lot of Northwest beer fans, Rogue has become either an object of controversy or some sort of vague anachronism. This is one of the best examples ever found of the ridiculousness of the phrase most often uttered in NW Beer Geek circles: “Well, nobody drinks _______, anymore!” Rogue has quietly but energetically become something of a beer and associated products mega-producer. The original brewery in Newport is still one of coastal Oregon’s top tourist destinations. There are now eight different taprooms and pubs, serving various products from their array of beers and bottled spirits from Rogue Distillery, most of which are barrel aged in custom-made casks from Rolling Thunder Cooperage, Rogue’s own barrel operation. Rogue Farms grows most of the fruit and herb infusions that go into their ales, as well as many of the hops used in the process, from their pastoral location in Independence, Oregon, where you can eat exceptional pub grub, much of it Farm To Table, and have a Rogue beer or two before touring their 52 acres of hops. They maintain a large apiary and their own home-bred honeybees, and make their own honey. They also cultivate thornless marionberries, pumpkins, cucumbers, hazelnuts, and even down to the tips used in their spruce ale…and a LOT more.

You should know – before you make your visit to any of the Rogue pubs, whether on the coast, in Portland and Ashland, in Astoria, or at the Rogue Brewhouse Pub in Issaquah, Washington – that there IS such a thing as a Rogue Aesthetic and it is devoutly and unabashedly Old Hippie Oregon Tree-Hugger. Rogue is so established and self-sufficient that they really don’t even fret about issues like “Will people like this?” anymore. They have made an absolutely bewildering array of beer styles and a broad range of beers that leave tight-assed Beer Purists gaping in disbelief. Just a few…

~ Rogue Ales “Beard Ale”: a hoppy little masterwork that uses a wild fermentation with native yeasts propagated from…nine beard hairs from head brewer John Maier’s beard. Maier, the longest tenured brewer in America, has had the beard for practically Rogue’s entire history and if any face carpet on the planet can spawn wild yeasts, it’s John Maier’s. And, in case you’re wondering, the beer is excellent.

~ Rogue “Vooddo Doughnuts Maple Bacon Ale”: this little sweet gem, believe it or not, is a smoke beer. It tastes, yes, like doughnuts, maple, and bacon. It’s frankly sweet and the hops just lurk in the background and it horrified the living shit out of beer snots, everywhere. Rogue was so concerned about the chorus of indignation, in fact, that they followed it with…

~ Rogue “Voodoo Doughnut Chocolate, Banana & Peanut Butter Ale”, Rogue “Voodoo Doughnut Pretzel, Raspberry & Chocolate Ale”, and Rogue “Voodoo Doughnut Mango Astronaut Ale”: Again, collabs with Portland’s immortal Voodoo Doughnuts, the little downtown bakery that popularized the Maple Bacon doughnut and other styles too numerous and too bizarre to mention. They are all absolutely credible ales, balanced and fully realized, and all kinda sweet; like drinking a sackful of your fave Voodoo creations and puttin’ on a wee bit o’ buzz, while you’re about it.

If this seems odd, you don’t know Rogue. “Odd” is practically a tenet of faith among Maier and his crew. A bit less unconventionally, they also made the Big Ass Series – Big Ass Barrel Beer de Garde and Big Ass Barrel Braggot – along with their newish Sriracha Hot Stout, and old favorites, Morimoto Black Obi Soba Ale and Morimoto Pilsner and even “Chatoe Rogue 19 Original Colonies Mead“(!).

Make NO mistake about this: Rogue Brewery, no matter how weird and even a little goofy they may occasionally seem, is one of the most skilled and diverse breweries in the world. Their core beers, those tried ‘n’ true proven quantities that a shocking number of veteran breweries sometimes let slide, are just as vibrant and drinkable and even revelatory today as they were back in 1988.

Rogue’s pubs are all amazingly unfussy and do not contain a molecule of pretension and the food…is…Grubbin’! The free-wheeling company humor is everywhere. Their most popular menu item is a small collaboration with the local Rogue Creamery (no relation) a plate with three tennis ball-sized meatballs, laced with pungent,  creamy Rogue Blue Cheese…and called “Blue Balls”. All the Rogue Pubs are unabashed hippie hangouts, circa 1980s vintage, and as comfortable and welcoming as your own den. 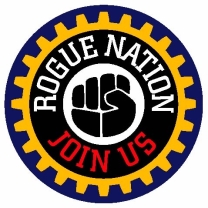 If you occasionally yearn for respite from the artifice and pretense of a lot of modern life, a visit to any of the Rogue locations is a virtual time machine and one of the Pacific Northwest’s quintessential cultural experiences. Rogue is the perfect evocation of All Things Oregon and the beer is absolutely in the top five of all the “Old Guard” breweries in the entire West. For those with a yen for authenticity and the pure pleasure of beer, it is a stop you skip, on your NW Beer Hejira, at the serious detriment of your own taste buds.

One thought on “The NW Icons: Part Two – The Rogue Brewing Nation”