Unless you’ve been asleep for the past year or so brutally bummed by the whole Trump Atrocity, as I have been, you’re read/heard/consumed some aspect of this brand new, non-accidental, totally premeditated style of American beer. If you haven’t tasted it, a few facts:

1.  It was invented – and not at all by happy accident, as MOST brewing styles have traditionally been – by a hugely crafty guy named Kim Sturdavant, brewmaster at San Francisco’s The Social Kitchen & Brewery, who was seeking some means of removing what he regarded as an excess of sweetness in the traditional IPA.

2.  The key to the style is an enzyme, an amylase called amyloglucosidase, which is cultured from black mold. The use of higher concentrations of this rather common brewing ingredient (it’s more commonly used for making low-carb beers) is intended to produce glucose, (GEEK ALERT) starting from the non-reducing ends of starch chains and dextrins. The result of this enzymatic action is the increase of the fermentability of wort. Translation: You can ferment out more of the natural sugars that come from grains and malt and produce a drier, lighter, crisper, and more refreshing beer.

“Puttin’ On The Spritz” Brut at Social

3.  Another of the side effects of the use of added amylase is that the bitterness profile of the hops is radically reined in. Sturdavant’s early effort, “Puttin On the Spritz” Brut IPA, analyzes out at 22 IBU. A basic, single IPA usually checks out to 55 IBU or higher.

4.  Sturdavant originally called the style “Hop Champagne” but, in describing the beers to a winemaker friend, heard about “Brut” as a term for describing the lowest sweetness level in Champagnes. He adopted it immediately and added “IPA” as the closest general descriptor of the flavor profile.

So..nutshell:  The Brut is light on the palate, dry, shows some degree of fruitiness (without the use of infusions), is effervescent but not nearly as much so as Champagne, and is noticeably low in bitterness.

(NOTE: the Bruts pictured here are some that I’ve tried and can strongly recommend. To find out what Brut is all about, buy any of these with confidence.) 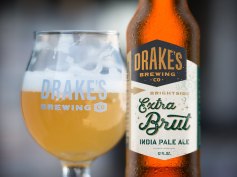 I tried two of Sturdavant’s Bruts at The Social, in San Francisco, during our trip to the Bay Area in February of 2018. I’ve been a fan of Social for over a decade but had to settle for the occasional care package of hand-filled containers from folks in my beer-geek network for learning about their beers and I was never under the impression that something inexpertly filled and shipped 1200 miles was any kind of real representation of Social’s beer character. The fact that my visit coincided with the early emergence of the style was just a total, bumbly, blind accident, as I really knew nothing about it but the name and ordered the tastings only because a guy sitting next to me said, “You GOTTA try this new style they invented here!” He even offered to buy. (I declined, with thanks)

Here are the exact notes from those first sips, transcribed from my phone: 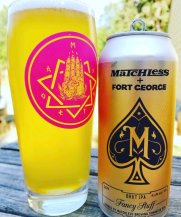 “…Subtle fruit, leaning to yellow apples and gooseberries, with straw and mild herbal notes…Dry!! (Hoo Noo?) Reminds me strongly of Linde. Cuvee Rene but with less astringency and tartness and more body…Second one shows something like corn in the background and expresses biscotti and white grapes…This is like a raised middle finger to all the NEIPA and fruit beer overdose…”

So that this doesn’t turn into “War and Peace”, here in this new era of Pour Fool brevity, here’s what I want to say: 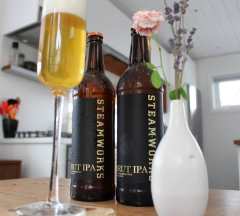 I do NOT think this style of beer either merits or needs the term “IPA” appended to it. “IPA” is A Thang, despite the vast range of interpretations that fall under its heading. It has parameters. BITTERNESS – up-front, intentional, carefully-erected bitterness – is a HUGE part of the description. It is even possible to argue, and I seem to be doing that now, that bitterness is the central focus of the IPA style. Yeah, yeah, the NEIPA/Hazy/Whatever-Term-This-Week style of IPA shoves fruit so far into the foreground that the bitterness frequently struggles to dig out from under the bushel baskets laid upon it. But it is there, even if it just kinda occurs on the finish.

What I dearly, gratefully, slavishly adore about Kim Sturdevant, right at this moment, is how this new notion was such a fervent “Up Yours” to the whole spectrum of overtly fruity, excessively sweet “milkshake beers” and “pastry Stouts” and all those other bastard children of the unholy union of “Delirium Tremens“, the iconic Belgian dessert beer from  Brouwerij Huyghe in Melle, Belgium, and gaggy American abominations like the wonderful Southern Tier Brewing’s lapse in judgment, “Crème Brûlée Imperial Milk Stout“, THE single most disgusting beer I have ever poured into my piehole. If not for my absolute LOVE for Southern Tier, it would be enough to make me run in terror from all their stuff. But Pumking (the ONLY pumpkin-spice ale I ever drink, anymore) and Krampus and 2XIPA and many others help me overlook the disaster that is CBIMS. I’m NOT a detractor of those styles, either. I drink and enjoy MANY of the fruit ales and pastry Stouts and regularly chastise people who make geezer noises about “those Goddamned fruity sissy beers“. But, as with every other style, there are people who make great ones and people who make shit…and there is a LOT of shit out there.

So, making an ale that is a rather brutal (no pun intended) refutation of fruitiness and a celebration of the great Belgian/Euro “Champagne beers”, like “DeuS” Brut Des Flandres from Brouwerij Bosteels or Brouwerij Lindeman’s “Cuvée René” is one of those sidelong Acts of Defiance that slams every one of my buttons.

I LOVE these beers, at least as made my some American breweries. The second and third I tasted were the very week after returning from San Fran, at two breweries about 40 miles from my house, and they were a God-awful, misguided, aimless fails. Ditto for the next four, all from around Seattle-Tacoma. The last two I had were just last week, in Denver, at Westfax Brewing, and both were far more akin to Sturdavant’s than our hurry-up local efforts which were, I believe, premature attempts intended to ride a wave, rather than any kind of serious effort to learn the style. As I’ve now been told by about a dozen brewers, Brut is NOT an easy ale to master and many brewers jumped right in without even really trying to thoroughly learn the basics of it.

One of the primary questions is when, in the process, to add the amylase. Kim Sturdevant admitted, during a Q&A with the San Francisco Brewers Guild, that he’s still experimenting with it but that the preliminary answer is probably “depends on how you want it to taste“.  Sturdavant’s stated goal is “It needs to be very dry … knock it below 1°Plato” and get it as close to zero as possible. Plato, in beverage making, is a measure of fermentable solids that remain in suspension after brewing. 0°Plato = pure water, so you can see that “knock it below 1°Plato” means “make this as dry as Death Valley“. 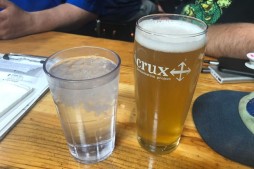 Crux Fermentation Project’s “Gated Community”, next to its spiritual cousin.

Sturdevant found that adding the amylase during fermentation may have muted the hops character and so has been adding it to the mash since. Doing it that way also helps arrest the enzymatic action, preventing the unhappy spectacle of a beer that just keeps on reacting endlessly during fermentation.

I’ve proposed, also, in deference to my cynical side, that a part of the appeal for brewers of this style is and will be a means of muting those bitter ol’ hops, for craft beer newbies. Many, many of these folks are still sporting palates that are attuned to the miniscule hops content of their former BudMillerCoorsPabst fetish beers and they struggle with the devout bitterness involved in having a real IPA with their beer-geeky friends. The Brut allows them to hang out in uber-hip taprooms and not have this timidity make them feel like either pussies (male version) or social outcasts (female version) of Beer Freak. Is this cynical? YEAH, it absolutely is. Is it wrong? There is a fine chance that it is not. At the gorgeous, curvy bar at The Social, I overheard that very exchange:

“I love this because I can order an IPA, now, and not feel like some fucking wimp.”

“I just don’t like bitter beer! And Jeff rags me about it constantly. So, I bring him here and drink this and tell him to fuck off.”

I firmly believe that this style of beer is such an anomaly, so directly counter to the current fashions and trends of craft brewing that it is actually held back and somewhat ghettoized by the addition of “IPA” after its name. In the wine world which spawned that term, “Brut” is seldom used just as a generic term, because there are rather a lot of sparkling wines that claim usage. When planning what to get for a party or dinner, most wine weenies do not say, “Get a bottle of Brut“. They would specify, “We need a dry Champagne” or “Find a Brut Cremant d’ Alsace” or another form of sparkling. Brut = Dry and that’s standard knowledge but “IPA” tosses a wrench into that thinking.

I want to propose that we all just call this style “Brut ales“, which will organically shorten to just “Brut“.

It’s a completely descriptive, accurate name that spans the gamut of sweetness and bitterness that the style may come to include, without presuming in any direction. It is a style that ABSOLUTELY deserves a stage unto itself, both on its own considerable and delicious merits and as a check and balance on the fruity excesses of current brewing trends. Craft newbies will like it for its lightness and relentless refreshment quotient. Beer geeks will appreciate the complexity and wildly expressive clarity of the style. Euro beer shits will LOVE it because it values and validates the restraint, even the occasional stinginess and buttoned-up conformity, of those Euro lagers. Even Belgian freaks like me will like the Brut for its direct, dead-straight lineage from the great Bière de Champagne or Bière Brut traditions of our aesthetic homeland. 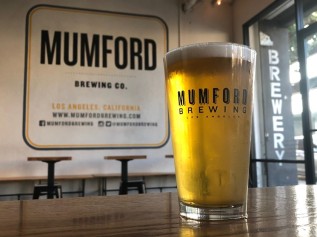 Brut Ale, then, is a wonderful, logical, deadly appealing Next Step in the evolution of American craft beer. If you haven’t yet tasted one, I’m going to urge you to do it but with the disclaimer that maybe your fave brewery is not going to do it well. Even a very accomplished brewery, which brews otherwise fine beers, can fall off the log in trying to make this. Those awful ones I had around Seattle-Tacoma were from breweries that make exceptional British-style ales but just didn’t yet grasp what Brut is all about. Keep Trying. I promise you that, when you do find a really good example of the American Brut Ale, you will find a life-long pleasure that you can go back to again and again, as a welcome respite from the mega-hops and fruit and coffee and wood and pickled lizards.

One thought on “Brut Squad: The Dry Side of Emerging Craft Beer”