You haven’t read much about Irish Whiskey here, mostly because I haven’t really worked at finding new ones.

That’s shameful, I guess, but about 30% of what winds up being tasted and evaluated for The Pour Fool is stuff I get via the beverage pimps at FedEx and nobody has sent much Irish whiskey. And, to come clean, I’m nowhere near as much a fan of the Irish stuff as I am of their surly cousins across the ol’ North Channel, the crafty, vaguely hostile Scots, whose bittersweet worldview more closely matches mine and finds its succinct expression in big, muscular malted whiskeys.

Irish whiskey is traditionally made from unmalted grains. It’s rather dry and straightforward and seems to eschew all this Bourbon barrel or Madeira cask folderol, opting instead for a more Irish ideal: does this shit get ya drunk? Answer: YES, and it doesn’t suck. Let’s bottle this and call it good, m’kay, ya silly bastards?

Let me go ahead and stipulate that the previous paragraph is somewhat tongue-in-cheek and vastly over-simplified and kinda deliberately stoopid. (So, all you Irish whiskey geeks can stop cranking up that tsunami of abuse you’re thinking about, right now.) There is a TON of complexity and art and uncluttered expression in Irish hooch and I know how to appreciate it, even if I generally don’t drink it.

But the simple fact is that nobody was really doing a whole lot interesting with it. Jameson, with all due respect (which is considerable), perfected Irish whiskey – at least to the extent they felt necessary – and if you drink Jameson’s, it’s entirely arguable that you know what you need to know about it, even if you never touch Tullamore Dew or Redbreast or Slane or Dead Rabbit.

Cooley Distillery, one of the original four Irish distilleries, and where Barr an Uisce is made.

There may be a reason for that creeping sameness. Until 2013, shockingly, there were only FOUR licensed distilleries in all of Ireland! For fans of Irish Whiskey, it’s certainly no secret that the Whiskeys themselves have been around for hundreds of years, so…all those dozens of different brands were being made by four companies, all heavily invested in upholding the traditional style of Irish booze and possibly – I say with NO real evidence except basic human nature – fundamentally unwilling to take on a lot of extra effort in helping some upstart distiller follow his dreams. That’s unfair, I know, but the bottom line is that four distilleries producing dozens of whiskeys can be expected to show some sameness.

But it’s not at all against the law, in Ireland, to change up the recipes or techniques for making it. It’s just that almost nobody really has…until recently. Cooley Distillery, one of those original four, recognizing the changing times, has made the Barr an Uisce according to their paradigm…and the shift is nearly seismic.

Last week, I happened to look out my front door and see a mailing tube laying just behind my flower boxes. It was a bit of a surprise in that I had not heard peep one from my elaborate security system, which can normally detect a cricket farting on my stoop.

I brought it inside, wary as heck that it might be a bomb. (It’s the Trump era and I’m a disrespectful shit…so I’ve been told) Maybe my lack of attention to…something or other, finally pissed off the wrong people? I opened it with ‘bated breath and slid out the contents.

What to do? Well, google the distillery, read the website. Scour the internet for facts about the Whiskeys. All the things I do for every post but usually not starting from total bafflement.

What do I find? Well, mainly that I’ve been living under a rock when it comes to Irish Whiskey. Barr an Uisce is a celebrated distillery that wins spirits medals so often that they have to borrow a wheelbarrow to get the things back home. Here are a few: 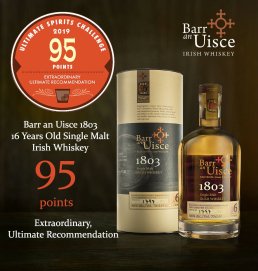 There are more but that’s a taste…and TASTE is what this post is all about. 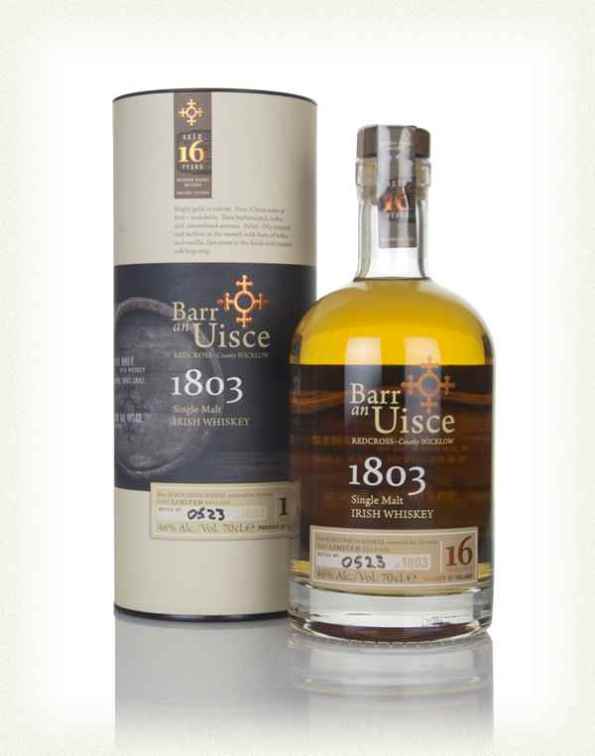 One of the bottles contained Barr an Uisce 1803 Single Malt Limited Edition 16 Year Old Irish Whiskey, a gorgeous amber elixir that appears to glow from within, in the glass, and emits a virtual cloud of aromatics that centers on vanilla and baked apples, butterscotch and caramel and pipe tobacco. It delivers all of that on the palate, plus emphatic notes of baking spices, tropical fruit, brandied apricots, coconut, and subtle woodsmoke. Compared to the rather austere, grainy, direct character of most Irish Whiskeys, this is almost hedonistic, as much a spiritual cousin to Kentucky Bourbon as to its Irish and Scottish cousins. It finishes crisp and clean and warms without becoming one of those “test of manhood” Whiskeys that may deliver the flavor but feel like sucking on a blowtorch. It checks in at a measured 46% ABV and is devilishly easy to drink. Caution is needed when drinking this, as it can easily put a grown man on his knees. And maybe not the normal caution used to approach any Whiskey, as this stuff, to me, doesn’t even come off as 46%. At about $80 a bottle (if you comparison shop), it ain’t cheap but it IS a great value, since you would pay a LOT more than that for a comparable Scotch.

This is easily THE single best Irish Whiskey I’ve EVER tasted and I cannot recommend it highly enough. For even Bourbon hard-cores, there will be great familiarity from the solid 16 years this beautiful stuff spent in first-use Kentucky Bourbon barrels. 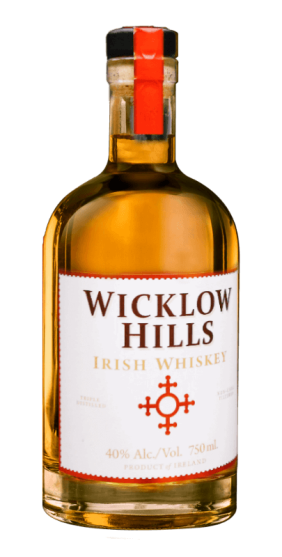 Where the 16 is grand and majestic and leads with a deep-pile richness, Wicklow Hills Blended Irish Whiskey is a perfect Little Brother, all tropical fruit and yellow apples and orange peel and coconut. It’s bright and lively on the palate and exudes a juicy stone fruit and melon character that plays  nicely off the bedrock of wet wood and vanilla and sugar cookies and toffee. At 40%, it’s a tad, just a touch, milder than the 16 but has an ever broader palate, with grace notes of ginger and jasmine and white pepper and star fruit lurking in the background.

As opposed to the traditional Irish grain whiskey, Wicklow Hills is 21% malted grains, which gives it a fat, creamy, caramel framework upon which all that basketful of goodies lies. It’s basically different from the Jamesons style and the difference is immediately noticeable.

This is a mixed age Whiskey that comes off far more like a good single malt, with a seamless flavor profile that gives it an expensive feel without the blistering price tag. (This could probably cost a bit more but let’s not tell them.) It’s a stunning value in fine quality European Whiskey and I’m told that, for a rather small distillery, it’s in good enough supply that you should be able to find some. And if you love Whiskey of any style, you absolutely SHOULD find this, buy it, and enjoy it as much as I have.  94 Points

I hereby apologize to my Irish homies and ancestors for the shocking lapse of initiative that led me to whiffing on a great distillery. Better late than never, I guess, and I am now officially a Barr an Uisce fan and plan to spread the Gospel.