I’ve stated before, on Facebook and Twitter, that a major brewery from the Midwest had become a part of the Seattle market and the more I tasted their beers, the more I was bummed that the lofty rep was built on beers that I found uniformly “Meh“. I did, of course, not name names, because I have NEVER used names in complaining about ANY brewery, in the almost 11 year history of The Pour Fool. I never even wrote anything mildly critical about any specific brewery, winery, or distillery. And I could have. 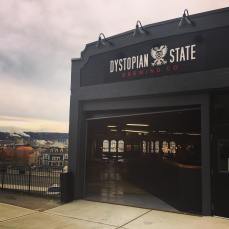 Dystopian State Brewing, Tacoma, WA: Fucked up, admitted it, fixed it, moved on. Y’know, like adults do.

I do that out of respect for America’s small, independent breweries (like the one to the left, here in my hometown) and the simple human fact that we all make mistakes and deserve second chances. Fortunately, most of the breweries which have made mistakes learned from them, copped to them, made amends where necessary, and apologized publicly. There have been SO few exceptions that I really never had to confront the necessity of just unloading on any small, independent producers of beverages. I watched a few controversies, mainly shite like trademark infringement and bad planning at release events and the occasional employee discord. But anything major, potentially criminal? Next to nothing. So, my resolution to speak to craft brewing bad acts without naming names was easy. And criticizing bad brewing? Not even a possibility and that will remain the same. But honoring the anonymity of craft brewers who do Very Bad Things?

Founders Brewing Co. is that brewery and I would never have coughed up that name simply for finding their products sub-par BUT…that is no longer the whole story.

Here, from the website of The Detroit Free Press, you’ll find a link to what is just one visible example of a disgusting episode at Founders that had members of their management using racist phrases and trigger words IN WRITING and in casual conversation, with and about an African-American employee of their Detroit taproom…an African-American manager directly being called “ni**er”.

This is not a case of he said/he said. Founders admitted that the racial slurs were used. And one of the employees who used them was still on the payroll past the time a lawsuit was filed by the victim. This, from the Detroit Free Press linked article:

“…other employees said the n-word in conversation with Tracy Evans, who is black, and didn’t immediately get fired. One of the two employees was still working for the company when Founders filed its response, (to a lawsuit arising from the incidents) Oct. 22.” 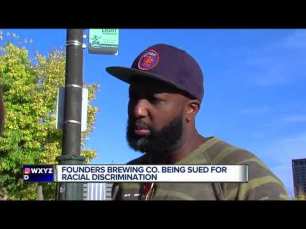 I read all this when the story first broke and still, because my default position is that I like and support craft brewers, didn’t form a firm opinion about the situation. But, today I read the transcript below, from a Birmingham, Michigan, online magazine of The Detroit Metro Times. It involves a deposition being given by one of the accused, Founders’ Detroit general manager Dominic Ryan, to Jack Schulz, the attorney for plaintiff Tracy Evans, with a Founders attorney in attendance…

Founders Manager Dominic Ryan: 2011, 2012. We had mutual friends before working there, so …

Schulz: OK, So you knew Tracy prior to his employment at Founders?

Schulz: OK, are you aware Tracy is Black?

Ryan: What do you mean by that?

Schulz: Are you aware Tracy is African-American?

Ryan: I’m not sure of his lineage so I can’t answer that.

Schulz: Alright. Are you aware that Tracy is a man of color?

Ryan: What do you mean by that?

Schulz: No? Do you know … You don’t know what it means for someone to be a white person or a Black person?

Schulz: You don’t need any. I can promise you that. We’ll keep the record as is. Someone’s skin color. A white …

Ryan: So that’s what you’re referring to?

Ryan: OK. Yes, I know the difference in skin tone.

Schulz: Are you able to identify individuals by their skin tone?

Ryan: What do you mean “identify”?

Schulz: I mean have you ever looked at Tracy Evans in your entire life? Have you? That’s a … that’s a genuine question.

Founders Attorney: You can answer.

Schulz: And did you ever realize that Tracy’s skin [is] Black?

Ryan: That’s not … I mean, is his skin different from mine? Yes.

Ryan: What do you mean “how”? It’s a different color.

Schulz: And what is the difference of that color?

Schulz: And that means?

Schulz: I mean, we could … This could be a one-sentence answer, you know. So by your … I guess your testimony is you have no idea if Tracy is a minority, if he’s African-American?

Ryan: I don’t know Tracy’s lineage, so I can’t speculate on whether he’s … if he’s from Africa or not.

Schulz: What do you mean lineage, from Africa?

Ryan: No. I mean, like, I don’t know his DNA.  (NOTE: How many people know another person’s DNA? Raise your hands. Anybody? Stupid.)

Schulz: Have you ever met Black people who aren’t from Africa?

Schulz: Have you ever met a Black person born in America?

Schulz: And you were able … Have you ever met a Black person who didn’t tell you they were Black?

Ryan: Can you rephrase that?

Schulz: To your knowledge?

Schulz: So you don’t know him? What about Kwame Kilpatrick?

Schulz: To your knowledge, was Kwame Kilpatrick Black? 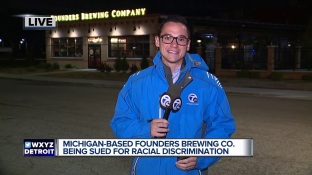 For anyone not conversant with strategized corporate double-speak, let me explain. This is called The Same Ol’ Shit: Corporate hot-shot, a little too comfortable in his job, a bit too smug in his perceived “power”, shoots off his mouth, letting out those little demons who whisper in his ear, those devils of his lower nature, gets caught at it, and then scrambles to shift blame and evade responsibility. That’s the common-as-dirt attitude of total entitlement that marks American business and politics today and even, to some extent, child-rearing. Little Joey is raised by parents who shield him from the consequences of his actions and Joe then grows up convinced that no matter what he does, he should be got out of it, with no consequences, no comebacks, no responsibility. “I couldn’t have fired Tracy Evans because he’s Black because I don’t recognize skin color unless I see a DNA test! And I could never have called him a ni**er because obviously I don’t think that way!”

I cannot and will not give ANY benefit of doubt to a company which harbors people who hold such attitudes, especially Ryan and his mealy-mouthed, Trumpian evasions and disingenuous nonsense that was ONLY intended to avoid admitting his culpability and allow his attorney to cast this crap sandwich of a deposition as evidence of a lofty societal enlightenment. And, sure enough, again from The Detroit Metro Times, “…a Founders attorney seemed to double down on Ryan’s strategy, ‘Mr. Ryan was simply saying that he does not assume anything about individuals’ race or ethnicity unless they tell him that information’…”

May I point out, here that Barack Obama openly admitted, a thousand times, that his heritage is Caucasian and African-American and he identifies as Black. The man himself said it. Unless Ryan was living in a cave for eight+ years or is an immigrant from a country with no TV or internet, Ryan KNOWS that Barack Obama is Black. Unless, of course, he doesn’t take anybody’s word for their own heritage unless they present him with their DNA test. This man has obviously been studying the Trump Playbook: deflect, obfuscate, dig for loopholes, and if all else fails, simply lie.

When a lawsuit is filed and the company admits its guilt and they keep the offender on their payroll, THAT is the relevant Statement of their culture, pretty words and retro-PC ass-covering be damned. Not only is it totally offensive, contemptible, and inexcusable for all the good reasons of humanity and civility, it COMPLETELY violates the unwritten, unspoken ethos – which I believe we ALL involved in any way with American craft brewing assumed didn’t NEED to be either written OR spoken – that ours is a community founded on the idea of inclusiveness and cooperation and that divisive, exclusionary attitudes and their resultant actions have NO place in the beer culture.

Founders is getting slam-hammered on social media, as they should.

As this sordid story plays out, Founders has, of course, made all the correct mouth noises and spoken about “sensitivity training” and “our corporate principles” and all that is great and all that is convenient and maybe Founders will understand if I view that as akin to a deathbed conversion in which a life-long reprobate attempts to evade his Divine come-uppance by “finding Jesus” just in the nick of time. It would have been FAR simpler and vastly more effective for ONE management person at Founders to catch wind of someone talking that kind of shit, instantly call them into the offices, and fire them. And then release a statement about why it happened.

I’m not buying any such idea that, in the entire history of corporate cultures, Founders was the ONLY organization in which NOBODY had any idea that some of their guys were uttering racial trash and calling other employees “ni**ers“. ONE quick and painful – much in the way ripping off a Band-Aid is painful – episode of a racist being publicly dismissed in disgrace for being stupid enough to think that way and then tripling down on it by SAYING IT ALOUD, would be enough to serve notice that that shit don’t play at Founders.

But you didn’t do that, didya Founders? 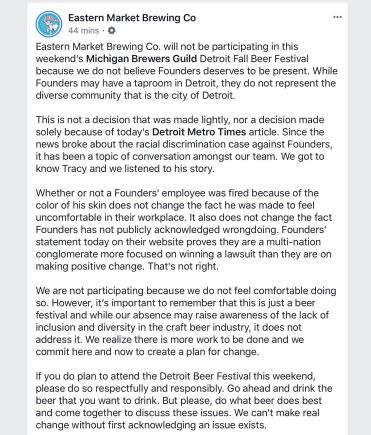 Reaction from another Michigan brewery

Now, of course, Founders is up to their neck in it and employing attorneys who think it’s a peachy strategy to allow offenders to try a rhetorical ploy, in a legal deposition, that wouldn’t fool a jury of kindergarten kids. And despite all the happy crap about “sensitivity training”, they’re STILL fighting this lawsuit. Instead of settling and saying, “Yeah, we were careless and out of touch and hired some racist pusbags” and settling it, like adults would, Founders’ attorneys – the same ones who ratified the “I’m Colorblind!” defense – are releasing statements blaming the victim, saying that Tracy Evans was simply a bad employee who had it coming. Conveniently, they traipse on past the racist comments and actions and try to make this just another firing for cause.

ENOUGH. I completely stand by my eleven year decision of not naming names in dealing with craft brewers, winemakers, and distillers. It was done for the right reasons and I fully intend to continue doing it…except when I can’t.

FUCK Founders Brewing Co. They had their chances to do the right thing with these yahoos they hired and they didn’t take them. They attempted to evade and obfuscate and they harbored at least one of the people responsible, LONG past the point at which doing so could indicate anything other than corporate tolerance for the attitudes, as evidenced by the fact that they apparently refuse to even think about settling. The beer is “Meh“, the attitudes are “yuck“, and the fact that I see their cans and bottles on shelves in MY hometown, out here in the PNW, is now “WTF?!?”

There are just under 8,000 craft breweries in the US. If I have to lose one for racism, well, I’ve lost all those Anheuser Busch (or AB/InBev, or whatever the rotted corpse of that mangy outfit is going by this week) whore-outs and there’s still, I’ve noticed, quite a bit of craft beer out there…MOST of which, I’ve also noticed, produces a better reaction than, “Meh” and doesn’t amount to a tacit acceptance of some of humanity’s sleaziest and most poisonous attitudes.