Many of us thought it would never happen…

Here’s a brewery in Bend, Oregon – inarguably the nation’s greatest city for craft beer – with a owner-brewmaster – Larry Sidor – who, both in his current gig and as brewmaster at Deschutes for eight years, has been responsible for more innovation in the making of hoppy ales than all but >1% of the brewers in America. Y’think this guy might just have a bit of Trouble landing on ONE IPA that would express his brewery’s aesthetic identity?

Here is just the list of IPA-style beers produced by Crux since opening their doors about seven years ago:

NOTHING called “Crux IPA”. Why? Because if you’re going to give a beer that name, you’re saying that the beer stands for everything your brewery stands for and does it in a way that makes you willing to be judged by that simplest standard. So…for the entire life of Crux, there was no Crux IPA. 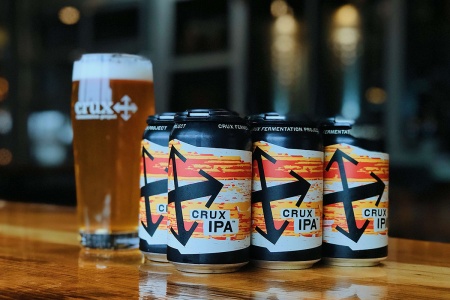 Crux IPA came to me in a box from Bend, about 20 days ago. I opened one of the two cans on the rainy evening of Valentine’s Day and we sat in our car, sampling it alongside a newish IPA from another well-respected Oregon brewing juggernaut. We bought ourselves a picnic from a local specialty market and sat on a hill overlooking downtown Tacoma…which looks a HELL of a lot better and more romantic than Tacoma ever looks in the daylight.  What we came away with was:

1. DAMN, Stadium Thrifyway has a KILLER deli department. And,

2. DAMN, we really nailed it on picking our IPAs.

More on the other one later but the new Crux IPA sports “whole flower CTZ hops with a touch of Galaxy, Mosaic, and Comet“, as their website says, and as perfectly seamless a flavor profile as I’ve tasted in anybody’s IPA in a VERY long time. Low acidity, lovely effervescence, emphatic flavors of mango and guava and berries and toast and pine resins and flowers and melon and a whole raft of grace notes that surface as you sip and the beer warms slightly. It is cursedly easy to drink and, at 5.8% ABV, you can probably have two or three in an evening without winding up trying to suck a bowling ball through a straw. The complexity is nearly off the charts, with new flavors unfolding right to the last sip.

As an example and Statement on Cruz’s brewing aesthetic, Crux IPA a could scarcely be more complete. In a continuum that includes Fresh Squeezed and Pinedrops at Deschutes and the aforementioned Crux roster, this new IPA manages to capture most of the virtues of many of its predecessors, while adding up to something entirely its own. Crux IPA is a genuine achievement, even in the jam-packed field of “Oregon IPAs That Don’t Suck“. It packs in enough dankness to satisfy the HopHeads, while remaining balanced enough to let craft newbies approach it without cringing. GREAT stuff, from one of America’s Top Ten breweries.  99 Points

It’s boozy in a remarkably friendly, non-confrontational way, rich and deep but surprisingly light on the palate, and so balanced that it could just make a perfect introduction, for newer craft fans, to the sexy little universe of grain wines that is still mostly Barleywines but with an increasing number of Wheatwines and a tiny number, finally!, of Ryewines just beginning to surface. (Reuben’s Brews “Three Ryes Men” is in my beer fridge right now, gently calling my name…).

And, as you can see, All Worked Up is a GORGEOUS, lambent bronze in your glass, encouraging you to drink a wee bit more. BE CAREFUL. At 12.5% ABV, this is nothing to guzzle and has carries real potential for loud, naked drunkenness for anyone who is fooled by the relative ease of refilling the glass.

As with so many other beers from this transcendent, ground-breaking brewery, All Worked Up is an instant classic, a lyrical and masterful retelling of the ancient story of Strong Ales and their magical allure for untimid beer drinkers.  100 Points